“Electricity is everything! It is technology—without it, life stops! You can’t run the washing, watch the TV, you can’t clean, you are nothing!” Fatma Ayaz, a coffee shop owner in Bilecik, Turkey, gets straight to the point.  In her daily life, she counts on affordable electricity both to run her household and to serve her customers. In a larger sense, this need for energy access is fundamental to all economic growth.

about 7 percent annually in recent years, requiring steady efforts to expand the sources of reliable and clean power. Through a series of interlinked measures, starting in the early 2000s, the country has worked to meet this growing demand, while spurring private-sector investment and innovation. And it has turned to the World Bank Group for help throughout.

What does it take to transform a sector, to meet a country’s needs while ensuring long-term sustainability? Turkey’s electric power sector, where the Bank Group has been closely involved for more than two decades, provides a perspective on what’s involved and how we can help.

In 2000-2001, Turkey faced a major economic crisis. Among many other challenges, it highlighted the liabilities of the country’s initial privatization efforts in electric power.  Some of the deals with private investors that the government had set up in the 1990s were structured in ways that couldn’t weather the crisis.  The government was forced to cancel some of its contracts, with several cases going to ICSID, the World Bank Group arm that handles international investment disputes.

In the words of a World Bank official who was working on our Turkey portfolio at the time, it was “a period that broke the backs of the private sector”— in particular, the private firms that had begun investing in the country’s electricity sector.

But in fact, the World Bank Group wasn’t new to the situation when the crisis hit. Our advice had been one of the inputs as Turkey’s government assessed its options in the 1990s for bringing private players into electric power. While the government’s initial model for privatization didn’t prove to be crisis-proof, we stayed with them in the downturn, and the crisis renewed our determination to help come up with more sustainable solutions. With time, this partnership has led to more stable, equitable private involvement in the sector.

In looking back over these years, what were the elements that helped drive this transformation?

For its part, the government maintained a firm commitment to bringing in the private sector. The crisis became the spark to more ambitious reforms and some hard choices in the interest of getting things right. Turkey’s parliament passed legislation in 2001 that created new institutions, aiming to create a better enabling environment.

The years after the crisis entailed extensive work by the World Bank to support the reforms. While the government was keen to make changes, we were willing to stick by them and be flexible. We brought in expertise from around the world and maintained consistent, continuous engagement with decision makers. Our team recalls that some of the key developments happened opportunistically, at serendipitous moments in ministers’ busy schedules. A government official who was closely involved describes the World Bank’s contribution as “vital at that time, and very successful.”

The vision to reform the sector was enshrined in the law. But the dates initially attached to accomplishing it proved unrealistic. The original plan was to complete the reforms in three years; in fact, it took 10 to 12 years. , create institutions, and build their capacity. Countries need a wide range of support while implementing their legislated reform program, and we work to stay engaged and responsive throughout the process.

The challenge of implementation

Turkey went from one state-owned enterprise running the power sector as a monopoly to multiple, specialized companies that handle power generation, transmission, and distribution. These had to be made to function and compete, with decisions needed on types of contracts, hardware and systems, and preparation for sales and concessions.  Similarly, the new regulatory agency needed time for set-up, staffing, and budgeting; this involved years of capacity building and a big push to get complex IT systems in place.

The World Bank provided technical expertise and policy assistance on market structure, regulation, and pricing. We also made development policy loans to support the government’s efforts to open the electricity market. A wholesale market that launched in 2006 gave private investors a market with clear pricing signals.

Turkey was fortunate in having a core of local investors, which allowed domestic private financers to get the ball rolling at an earlier stage than international investors. Domestic players can be critical to making this sort of reform credible and strong. They legitimize efforts and help get more local buy-in, making the government more responsive and improving public acceptance.

In Turkey’s case, the reforms even meant some re-casting of earlier players from past privatization deals. The reform effort reached a watershed in private investment once the new electricity market was up and running.

—the World Bank, IFC, MIGA, and ICSID—and a wide range of our financial instruments. Bank Group support to the country has intersected in the power sector, with upstream technical assistance and policy loans from the World Bank successfully combining with private sector–focused investments and guarantees from IFC and MIGA as the market took shape.

For the World Bank, public lending served to catalyze private investment, expand access for the poor, and help the power sector become more climate smart.  As a key example, .  This has had a huge leverage effect, leading to billions in private investment.

"Turkey is a country with growing power and energy needs. Therefore, it is important to diversify and make use of alternative and more efficient energy technologies."
Ercan Sayarı
General Manager, Nuh Çimento Company

, where IFC could step in.  Since 2008, IFC has been investing in private electricity companies—promoting further participation of private firms—while MIGA has contributed $300 million in guarantees. , with $1.2 billion from its own account and mobilization of $1.8 billion from other financiers.

Our institutions have worked together, segmenting the market to provide financing to both the public and private sectors. The relationship has proved symbiotic and effective. At the outset, IFC consulted heavily with the World Bank to understand the market. And then, as IFC has gained experience of what works and what needs to improve in the market, it has been able to provide feedback to the World Bank’s ongoing work with the government. Working in close partnership, we have been able to refine efforts based on evidence and lessons learned.

With the power sector transformed into an open and competitive market, this support has helped to catalyze more than $55 billion in private sector investment since 2000. 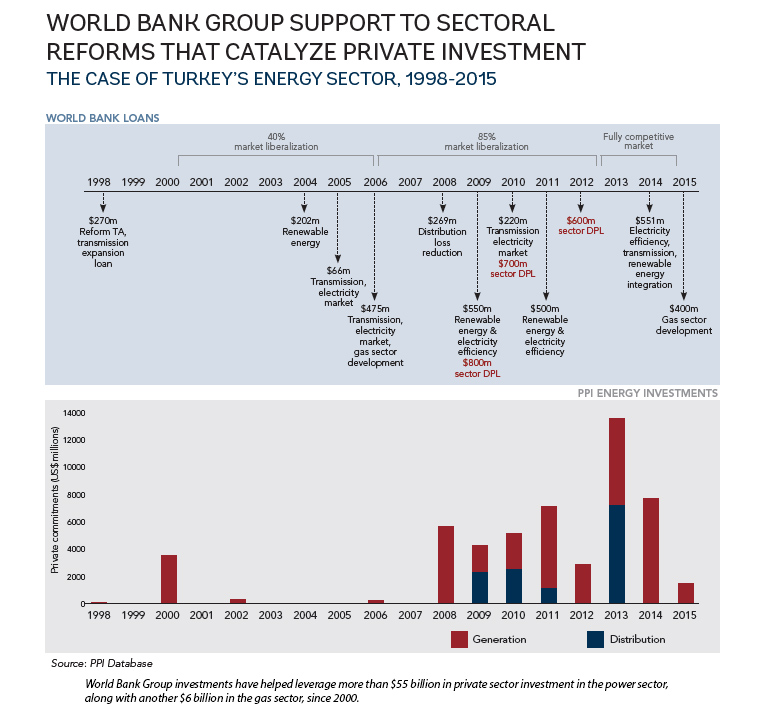 Generation increased nearly five-fold, from 58 gigawatt hours in 1990 to 273 in 2016, with 90 percent of it coming from the private sector. The country reached 100 percent access to electricity for its people in 2014. And by 2013, renewable power and energy efficiency had already saved the economy the equivalent of 25 million tons of oil.

"By 2015, “Through privatization and new investment, the share of the state…declined from nearly 100 percent to 30 percent."
Budak Dilli
Former Director, Turkish Ministry of Energy

A few measures proved especially critical to Turkey’s success. The reforms established a regulatory framework with certain and predictable pricing, clear targets, and an independent regulator. The government kept assets in its own hands, selling only operating rights: this provided a clean slate for companies. The government also avoided issuing guarantees, so that investors took market risks.

Capping the move to openness and competition, the country has had an electricity exchange market since 2015, and it is functioning well. , with renewables satisfying 30 percent of its energy needs.

A model for other engagements?

Does success with Turkey’s power sector provide a blueprint for our engagements in other countries and sectors?

Certainly, the work here informs our thinking as we look at other countries’ reforms. For example, it changed our earlier assumption that price adjustments had to be quick; we have become more patient. We look to apply lessons learned while recognizing that we must always tailor our assistance to the circumstances of each country.

Our client countries are in charge, and the most important factor to success is the commitment and support from their own decision makers. The Bank Group stands ready to help, offering expertise that reflects our unique global reach, backed by decades of experience in the public and private sectors. We offer a wide and expanding range of financial instruments, and our involvement helps leverage investment from other market players.

Fundamentally, this is the story of a country that learned from experience and came up with solutions for its specific challenges, drawing on World Bank Group expertise, financing, and ready support throughout the process. Each country, of course, has its own circumstances. Turkey not only had the advantage of strong domestic players, but also benefited from its relationship with the European Union, including an incentive to harmonize with EU regulations. Sectors vary as well:

What is most replicable from the success in Turkey is the long-term commitment we brought to this partnership. We stood with a country that faced crisis and needed to rethink some earlier decisions about private sector involvement. We stayed patient, built trust, and watched for new opportunities to make a difference as the situation evolved. We were willing to fit our mix of financing and technical advice to the client’s needs.

We also found effective ways to coordinate the work of the various Bank Group institutions, with the financing and expertise each of us brings. And this work is not in the past tense: we remain heavily engaged in a sector that continues to grow and evolve.

"The World Bank Group provides middle-income countries with financing and technical knowledge, drawn from international experience, to offer products that can precede and complement the private sector. Our long-term partnership has enabled Turkey to address its development challenges, and allowed us to share its successes with clients around the world."
Johannes Zutt
World Bank Country Director, Turkey

This level of commitment applies to all the countries we serve. We know that our clients see their potential for a brighter future, and we are helping them make this a reality. Going forward, we are working to coordinate our efforts systematically across Bank Group institutions, with the World Bank often helping lay the foundations for IFC, MIGA, and private investors. We want to stay focused on the big picture, well beyond the boundaries of individual projects. And we need to adapt whenever countries or sectors face new challenges and risks.

The World Bank Group is ready to work with our full range of clients, from the poorest and most fragile to the middle-income countries that are moving fastest up the economic ranks. We want them to make the most of new opportunities to prosper as they develop their economies creatively, sustainably, and for the betterment of all.