Ocean Protectors: How the Old Ways of Protecting the Ocean Are New Again in Fiji

Ocean conservation is more than just environmental protection to father of two, Josefa Bau; it is part of his identity.

Josefa’s love for the ocean started from a very young age, where his father would take him and his siblings out fishing early in the morning, sailing off with breakfast lovingly packed by their mother. Now 45 years old, Josefa runs a dolphin watching business from Natalei Eco Lodge – an hour’s drive northeast of Suva, Fiji’s capital – from where he takes visitors cruising out to emerald blue-green waters that Fiji is world famous for.

Visitors on Josefa’s tours are usually joined by an entourage of anywhere between 60 to 100 spinner dolphins, playfully jumping through the air as Josefa’s tour makes it way out to Makalati reef, also known as Moon Reef because of its crescent moon shape. It is said that these dolphins, known as babale in Fiji’s indigenous i-Taukei (indigenous Fijian) language, are the traditional guardians of the reef.

“It is said that when someone passes away, their spirit is launched from a point on the main island that then dives into the water where the dolphins entertain the spirits until they finally pass on to the afterlife,” explains Josefa. 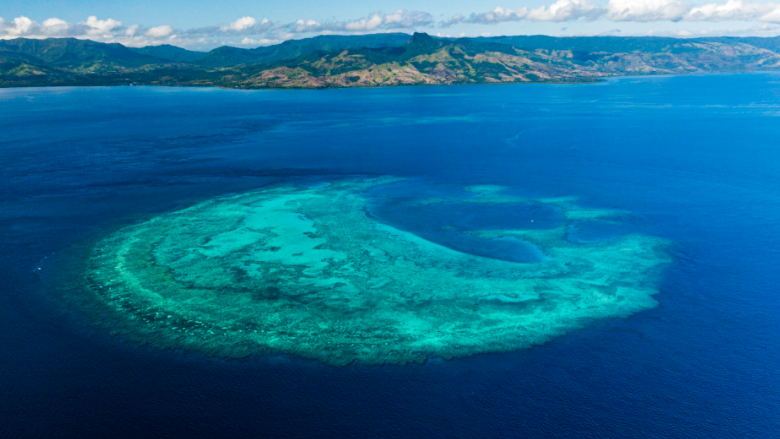 Moon Reef was officially declared a marine protected area in 2010 by the chiefs of Dawasamu, the surrounding district around Josefa’s community. This means that it is now a designated “no-take zone,” where fishing or harvesting of any species from the area is strictly prohibited. For Josefa and his community, the benefits have been significant.

“The dolphin watching business is a boost for tourism in Fiji, and for our local community,” says Josefa. “It helps to bring a lot of revenue to our community and to our schools. We want to make sure our next generation is aware of the importance of preserving our natural resources – from ridge to reef.”

The dividends of this protection have been far-reaching. The income generated from the Moon Reef dolphin tours support community development projects, including many conservation-based activities, marine protection education and awareness as well as supporting infrastructure at the local school. Monitoring and evaluation work – including reporting of any illegal fishing – is also undertaken by community members in the area, and Moon Reef serves as a frequent field research location for students from the University of South Pacific’s Marine Studies program.

Although Fiji’s exclusive economic zone (EEZ) is about 70 times larger than its landmass, Fiji’s terrestrial and marine protected areas only make up one percent of the country. Moon Reef is one of 466 Locally Managed Marine Area communities in all 14 provinces across Fiji. Such marine sanctuaries have been critical in the fight to preserve precious resources, allowing ecosystems to regenerate and thrive. Globally, the World Bank’s Banking on Protected Areas report says that every dollar invested in protected areas and eco-tourism leads to returns at least six-times the size of the initial investment.

According to the International Union for Conservation of Nature (IUCN), Fiji’s marine resources and their services to Fiji’s people are worth more than FJD2.5 billion per year. In Fiji, such benefits are amplified by the fact that traditional knowledge of marine management – which have been practiced by Pacific people for centuries – is being revived, meaning the “old ways” are becoming the ways again.

For example, Fijian i-Taukei belief systems are deeply connected to the ocean, where the people are seen as having the responsibility to nurture and protect their natural resources. This includes the notion of protecting sections of the marine environment – known as tabu (similar to the English; taboo) – meaning an area designated as a “no-take zone” for a period of time, to allow time for the recovery and rejuvenation of its biodiversity.

Sustainability doesn't just start and stop with one generation; it must continue to grow with each new generation. That’s why I'm so very passionate about the ocean. Because we saw how our forefathers respected and protected it. It is a blessing to us.
Josefa Bau

Studies have shown that within Moon Reef, the ecosystem is now thriving to such an extent that the resident pod of spinner dolphins has not only stayed in the reef for the last ten years, but has also grown in population.

Spinner dolphins sightings during the dolphin tours run by Josefa average between 60 – 100 in a pod. Credit: World Bank/Tom Vierus

“This is more than income generation; this is part of who we are. We want to make sure … our next generation is aware of the importance of preserving our natural resources from ridge to reef,” says Josefa.

Given 20% of Fiji’s population lives within one kilometer of the coastline, and 76% within five kilometers of the coastline, urgent action to protect marine areas and the livelihoods of coastal communities are critical. In 2021, the World Bank supported the completion of Fiji’s new National Ocean Policy, which incorporates the goal of a five-fold increase in marine protected areas in the country by 2024, with eventual expansion to reach 30 percent of the country’s waters by 2030. This new policy also supports greater inclusion of women in ocean management and aims to restore and maintain the health of Fiji’s ocean areas, provide food security, as well as creating more ecotourism opportunities, much like at Moon Reef. This policy change was part of US$145 million (approximately FJ$300 million) in support for Fiji’s recovery from the pandemic and a series of major economic shocks.

“Expanding Fiji’s marine protected areas means greater protection of Fiji’s exceptional biodiversity and improving ocean health,” says Lasse Melgaard, Resident Representative of the World Bank for the South Pacific. “The World Bank is really proud to be supporting Fiji’s mission to protect its ocean and marine ecosystems alongside other development organizations and partners.” 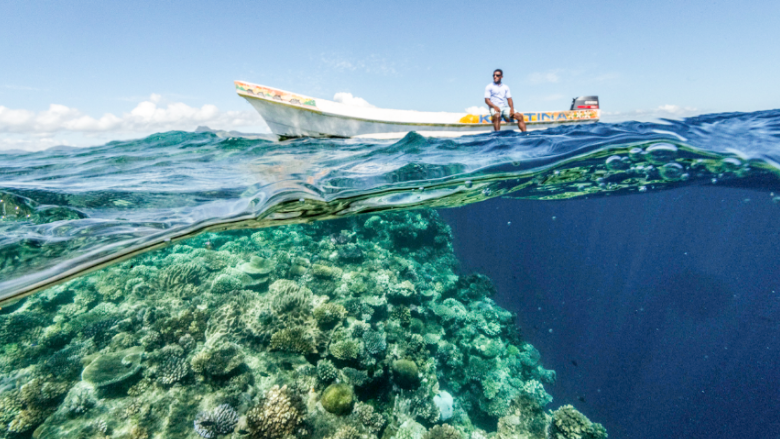 This commitment is part of the World Bank’s work to strengthen the resilience of the maritime economy and the habitats supporting it, to achieve what is called the “Blue Economy,” improving food security and creating sustainable income streams through more jobs from the ocean – particularly for coastal communities – while bolstering the resilience of countries most vulnerable to climate related events or disasters. It is also closely tied to the Pacific Islands Regional Oceanscape Program (PROP), another World Bank-supported program that works with Pacific governments, regional organizations and communities to help countries improve their effective management of oceanic fisheries, coastal fisheries and habitats supporting them.

However, despite the progress made in the last decade – particularly policy reforms, better monitoring of marine areas and more effective ocean management – there is still plenty to be done to ensure communities like Josefa’s can continue to thrive in and around the ocean, just as they have for centuries.

“Sustainability doesn't just start and stop with one generation; it must continue to grow with each new generation,” reflects Josefa. “That’s why I'm so very passionate about the ocean. Because we saw how our forefathers respected and protected it. It is a blessing to us.”

The World Bank’s support to Fiji includes funding from the International Bank for Reconstruction and Development (IBRD) and International Development Association (IDA), and grants for technical and analysis work. This is in addition to support from other key partners in the region.

Feature story: Toward a More Prosperous and Sustainable Pacific Ocean