Greater Inclusion Necessary for Haitians Living with a Disability 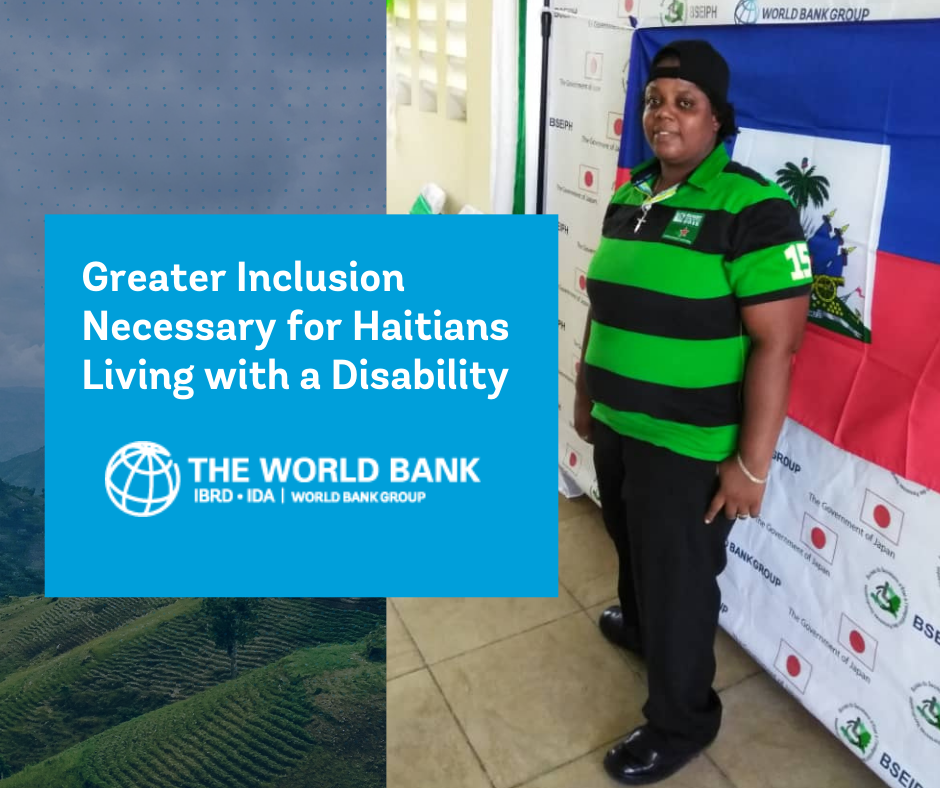 According to Rose Dinette Joseph, a young woman of 40, living with a disability should not be an obstacle to achieving personal and professional goals. However, for this Haitian born with congenital talipes equinovarus, known as a clubfoot, the reality is completely different. Her life has been filled with the taunts of her classmates, relatives and neighbors, social obstacles, and inadequate infrastructure to accommodate her disability. Rose Dinette has remained undaunted by these significant constraints and the opinions of others. In fact, these obstacles have pushed her to get involved to fight for better living conditions for the disabled. 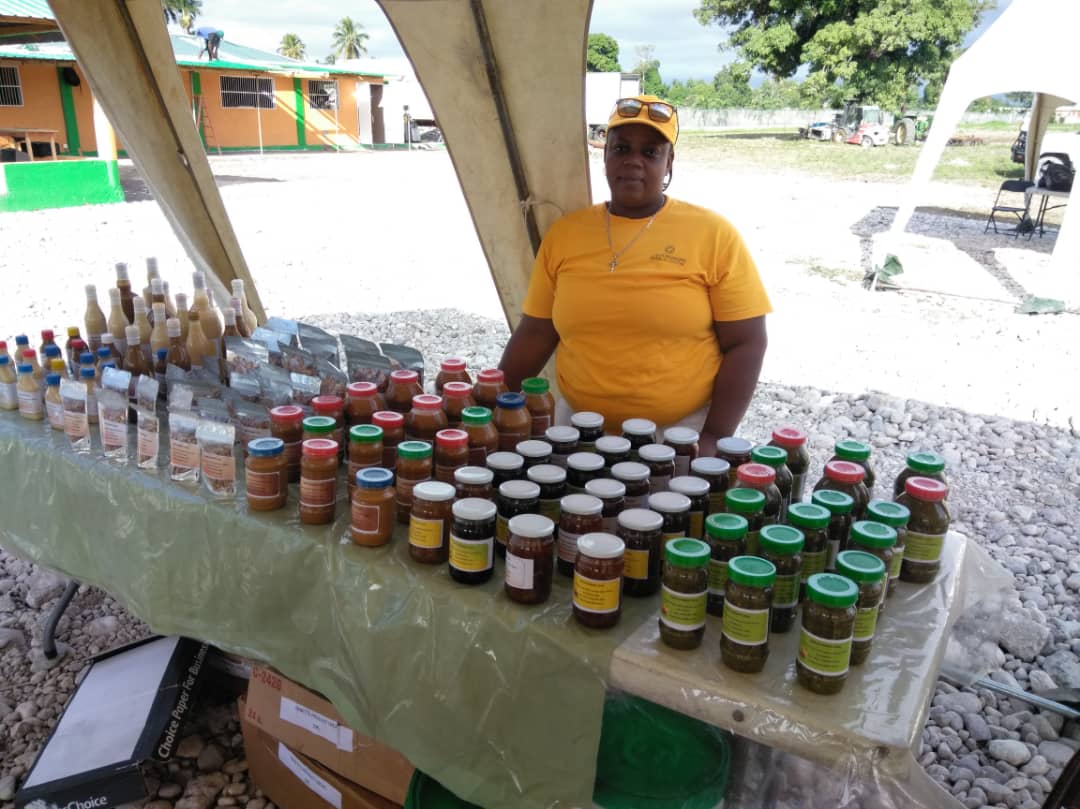 According to the report "Disability and inclusion in the Latin America and Caribbean region", published by the World Bank in December 2021, people living with a disability are over-represented among the groups at risk of falling into poverty. The report concludes that they are more likely to live in informal settlements, attend school for less time and be often excluded from the labor market. People living with disabilities, especially in developing countries, have been found to have limited access to services and there is often a lack of appropriate infrastructure to allow them to fully participate in society.

In Haiti, the prospect of full inclusion of people with disabilities is extremely challenging due to the extreme socioeconomic vulnerability of the population in general. Haiti has the lowest per capita GDP in Latin America and Caribbean region and the country is ranked 170 out of 189 in the UN Human Development Index table in 2020.

Lack of access to social services, a barrier to inclusion

As part of the ongoing expansion of the social registry SIMAST[1] the Office of the Secretary of State for the Integration of People with Disabilities (BSEIPH) carried out a survey to register 53,783 persons living with a disability in Haiti, using a new disability module in nearly 60 municipalities of the country.

According to the data collected, disabilities related to physical mobility are the most common in Haiti and affect 43% of respondents. Significant difficulties with vision, cognition, and the inability to take care of oneself affects between 21% and 27% of those registered. Hearing and communication difficulties respectively affect 11% and 14% of the disabled people questioned.

While the overall literacy rate is 62% in the country, the survey reveals that less than 30% of the disabled respondents were able to read and write. This trend is exacerbated for women with disabilities, as less than 23% of them can read and write. More so, certain groups appear particularly excluded from education, with less than 14% of women with hearing impairments being literate.

This survey also revealed that only 3.8% of the surveyed population receives any disability allowance (allowance, benefit, pension). While about 96% of the population is exposed to natural hazards, Rose Dinette regrets that there’s not enough specific attention for People with disabilities displaced in emergency shelters. “We have set up a Volunteer South structure for the protection of disabled people. When a disaster occurs, we assist the Civil Protection agency to ensure that people living with a disability in the safe heavens receive support adapted to their condition of reduced mobility.”.

Barriers to the World of Work

Data collected as part of this survey revealed that more than three quarters of people of working age living with disabilities are not working, citing their health and disability conditions as the reason. Only 2.6% of respondents work as salaried employees. Most of them report that they earn money through entrepreneurship.

Rose Dinette’s story reflects this grim reality. “After obtaining my degree in administrative sciences, I applied for several positions, but without success,” she recalls. Today, Rose Dinette volunteers for an organization serving women with disabilities as an accounting secretary for a project. She reports that many people living with a disability have been refused jobs based on concerns about their physical limitations. “Sometimes they are hired as a charity, without the employer taking into account their real competence.”

Across the Latin American and Caribbean region, people with disabilities continue to be widely discriminated against and have barriers that limit their personal development and social mobility. In the case of Haiti, people with disabilities are extremely vulnerable, have very high illiteracy rates and face a lack of integration into the world of work, as well as significant needs in terms of technical aids.

The National Policy for Social Protection and Promotion (PNPPS), adopted in 2020, recognizes the vulnerability of people with disabilities.  It is within this framework that the World Bank-financed Adaptive Social Protection for Increased Resilience (ASPIRE) project finances the new flagship safety net program run by the Ministry of Social Affairs and Labor, Klere Chimen, in the department of Grand’Anse. The project provides cash transfers to the most vulnerable households, including those with people with disabilities, to support them with regular cash transfers as well as accompanying measures addressing health, nutrition, and financial inclusion issues.

Beyond the survey data collection for the SIMAST, the BSEIPH also implemented a series of activities to promote the access to the labor market through professional training and job placement services, as well as sharing knowledge through outreach activities, including a communication campaign.  Training in the fields of cooking, agriculture and processing, and motorcycle repair was also provided to an initial cohort of 127 persons, including Rose Dinette. The project aims to provide them with ways to increase their incomes so they can gradually become economically independent[3].

“If you are not from a wealthy family, the only social mobility option for a person with a disability in Haiti is to start a business. For example, after my training in processing agricultural products, I set up my business that allows me to diversify my source of income,” says Rose Dinette.

Overall, these new data start filling a critical knowledge gap, allowing for a better understanding of the living conditions of persons with disabilities, and highlighting their extreme vulnerability. Persons with disabilities are often excluded from services, resulting in low literacy rates as well as low levels of labor market participation, and do not have adequate access to needed technical aids or allowances. A cycle of crises has further compounded the vulnerability of these populations. In this context it is critical to continue their registration into the social registry and promote their resilience and inclusion through programs addressing their specific vulnerabilities