Nigeria: The Community-Led Approach that is Helping Inclusive Development 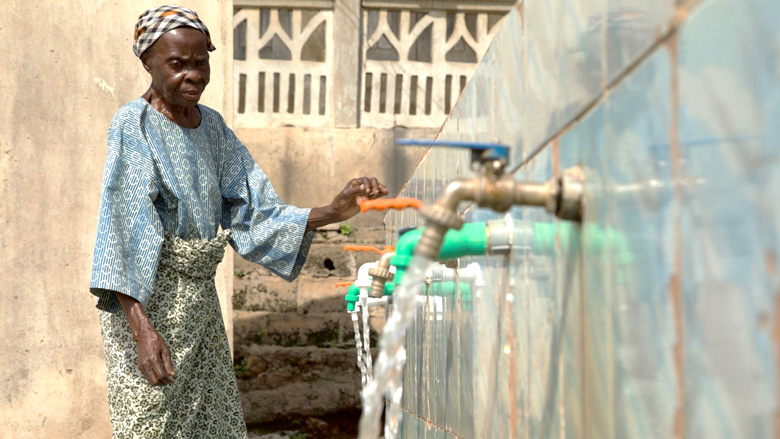 Listen to the story

ABUJA, Nigeria, October 21, 2021 - On the green hills of Wah, in the Sardauna area of Taraba state in Nigeria, lies a spring that has flowed for centuries. Yet, a lack of water storage facilities in this poor community of farmers and herders meant that the water from the spring had never been enough to meet the community’s needs, until now.

The spring water which hitherto collected into a brook and rolled down the hills into nothingness is now being captured in a storage facility that can hold 2,000 gallons of water, meeting the needs of the community.

“We now have drinkable water right in our homes because of the ingenuity of the CSDP team and our community leaders,” said Joshua Biri, a resident of the community. “Also, our women and children no longer have to walk the long distance to the brooks to fetch water. I am happy that my daughters are no longer late to school because of water.”

deployed under CSDP. At least 491 projects have been executed in Taraba, ranging from rural electrification to the provision of water.

CSDP supports the empowerment of communities and vulnerable groups within them to develop, implement and monitor micro-social infrastructure projects. It also aims to strengthen the skills and capacity of local government authorities and sectoral public agencies to support communities and build a partnership between them.

"It is a bottom-up approach where the communities are the drivers."
Aderonke Funmi Abokede,
The general manager of Osun CSDP in south-west Nigeria. 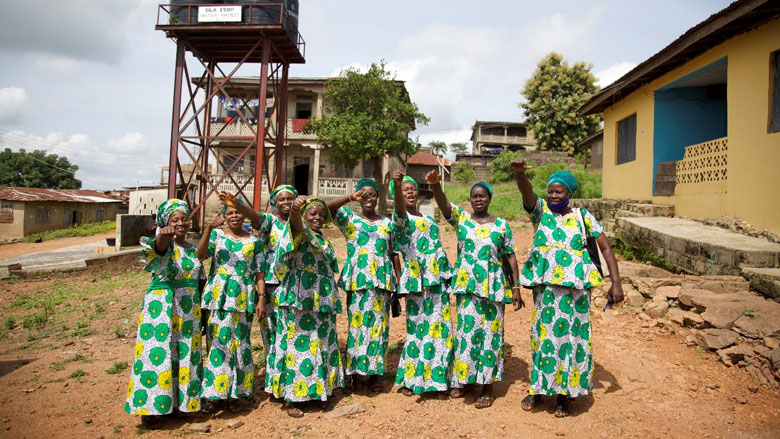 “Our community has benefitted by the addition of a road, toilet, electricity, water and a bridge.” Women of the Ola Community and Social Development project, southwest Nigeria.

No two communities are the same, and while there are similar infrastructural deficits in poor areas across Nigeria, the exigencies of their needs would be different.

At the heart of CSPD interventions is a Community-Driven Development (CDD) approach which empowers communities through the provision of grants to benefiting Communities.

“It is a bottom-up approach where the communities are the drivers,” said Aderonke Funmi Abokede, the general manager of Osun CSDP in southwest Nigeria. “A good reliability plan in place has helped Ola community to maintain the projects there.”

Her state has been implementing projects in several communities through the CSDP scheme for 10 years now, and Ms. Abokede said they are still going strong because of one key component: communities provide a certain percentage of the funds to execute projects.

“The aspect of contribution ensures ownership; they see themselves as stakeholders who have a stake in the project. If there is no money put in by the community, they will not see it as theirs”, she said of the CDD. “It’s a very good one that should be replicated everywhere, especially in developing countries.”

The success of the program, which can be found in 29 of Nigeria’s 36 states and the Federal Capital Territory (FCT), is that it also gives a voice to marginalized groups such as poor widows in Dingis community, in Bauchi State. These widows, when asked, pointed to orphaned children learning under a neem tree and said they wanted classrooms built for them.

Though the wide shades of the tree protected the children from the harsh sunlight that can get as high as 42 degrees Celsius, heavy winds carried their notebooks into the sky, sandstorms blew specks of dust into their eyes. The narrow leaves could not withstand the rains, which meant that classes were disrupted during the rainy seasons. After raising some money to build a block of classrooms, which was not enough, the community knew it was time to ask for assistance.

It is a similar story in Osun state where an incubation center was built in the capital Osogbo after a meeting between state officials and the deaf community.

The center was built with the support of Osun state CSDP through the World Bank, which contributed 95% of the fund while the deaf community contributed 5%.

“Here we train the hearing impaired with various vocational skills such as tailoring, hairdressing and catering”, said Olaniyi Temitope who is also hearing-impaired. “The center also has a hall which other than being used for meetings, is also rented out to raise money for its maintenance.” 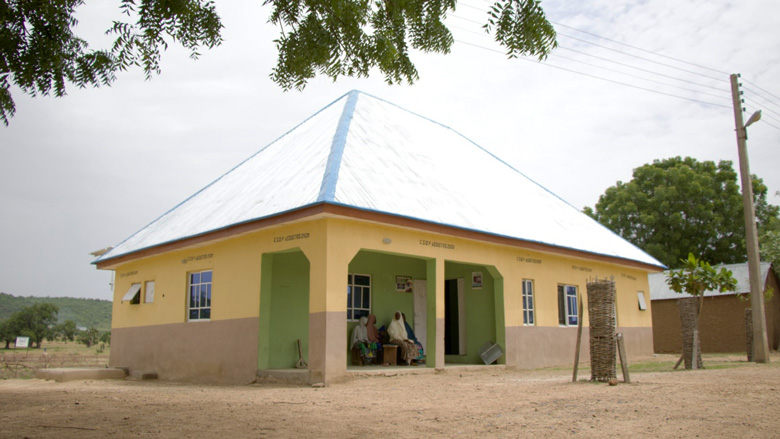 Dingis community, in Nigeria, now has a health centre which was one of the priorities of the women. © Sanumioluwa Modupe Dawodu, The World Bank

A key part of the CSDP is to strengthen the skills and capacity of the local governments and other agencies and ministries at the state level to support communities and build trust and partnership between them. One of such agencies is the Bauchi State Community and Social Development Agency (BSCSDA) headed by Abubakar Sadiq Mohammed.

, explained Abubakar Sadiq Mohammed. Like most government officials, he has a map in his office. But unlike most maps crisscrossed by contours of valleys and rivers, forests and towns, his map shows the concentration of poor communities in the state. The agency which was established by law to fight poverty does its job with “passion and professionalism” guided by the concept of community driven development.

The agency intervenes in seven sectors: health, water, education, electricity, transport, socio-economic development, and environment. Bauchi State has been able to achieve so much that it recently received a prize for being the state with the most completed micro-projects in Nigeria.

“This new concept of community driven development replaced the older supply model which did not involve the communities in deciding what projects would be most meaningful to them,” Mr Mohammed said. “The communities have been affected positively, and for the first time in their lives an agency is asking them what they want, lets them proffer solutions and gives them 90 to 95% of the cost of the project and the community is implementing the project,” he added. 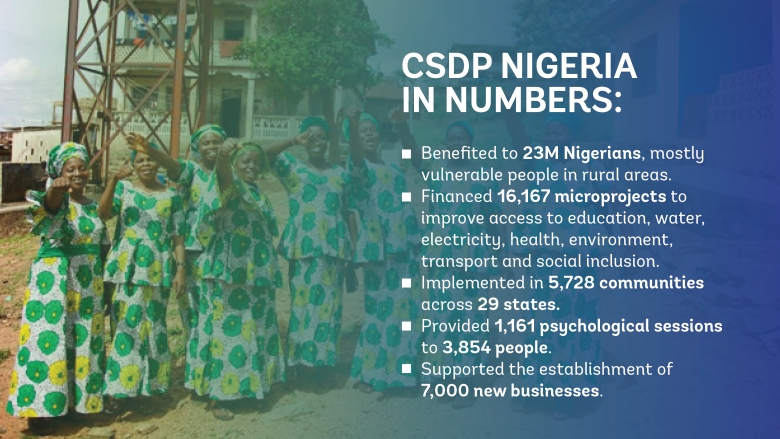 Challenges of Insurgency, Insecurity and Protests

But there have been challenges, in Bauchi state and elsewhere. There are maintenance and sustainability issues because of non-payment of user charges in some communities, while insurgency, insecurity, and the EndSARS protests in 2020 in some states led to the destruction of some projects and made some communities inaccessible. High inflation rates and the impact of the pandemic also reduced the value of the maximum 10-million-naira budget which affected the number of projects implemented.

Mr Mohammed’s map of the poor makes for grim reading and he rues the lack of maximum involvement by the local governments in his state, “who have not been forthcoming as they are supposed to in terms of providing the necessary technical backstopping to the communities and funding the local government technical review committee.

“We are under so much pressure from communities to access our intervention and I think it will be okay for the state government to contribute to the agency so that we can continue with what we are doing,” he said, his eyes still on the map.

But if he took his eyes off Bauchi and looked at the broader picture across Nigeria, he would be impressed by the colossal success recorded by the CDD template. More than 16,000 communities have so far benefitted from the project which has helped in alleviating the lives of the rural poor who are often neglected. And he doesn’t even have to look slightly down to Wah community where a shiny water storage tank is now a dot among the green hills. He only needs to look, past Gombe state to his right, to Adamawa, Borno and Yobe states, where 947 community housing schemes were built in 183 communities affected by insurgency through the CSDP. 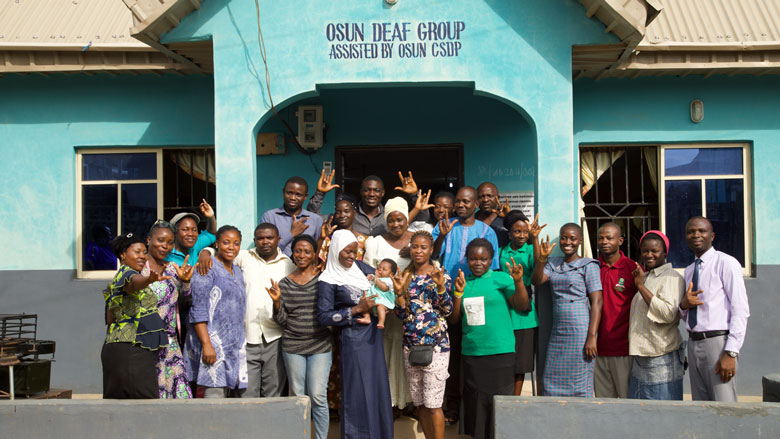