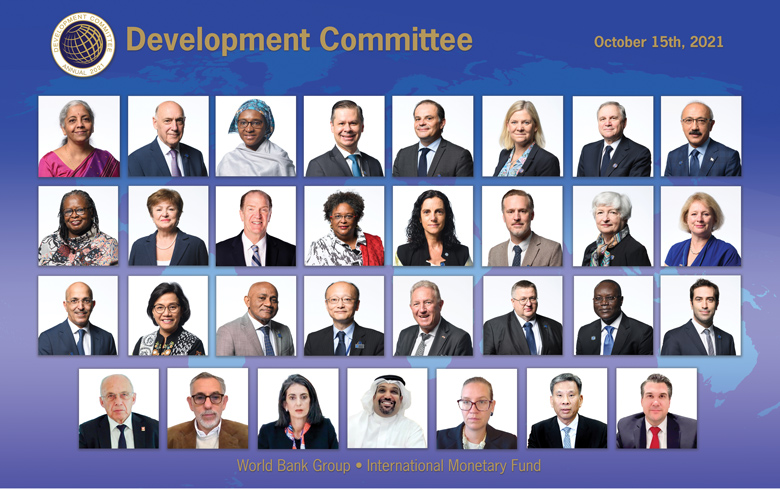 The global economy is experiencing an uneven recovery, with the risk that it will worsen inequality and leave low- and middle-income countries behind.  The path of the COVID-19 pandemic remains uncertain, with obstacles to vaccination in many countries.  Developing economies face challenges that could slow their recovery for years to come.  To help, the World Bank Group has mounted the largest crisis response in its history, and it is uniquely positioned to help ensure that all countries can participate in a green, resilient, and inclusive return to stability and growth.

These were key messages from the Development Committee, a ministerial-level forum that represents 189 member countries of the World Bank Group and the International Monetary Fund, in a communiqué issued at the institutions’ Annual Meetings.  The committee noted that the pandemic has compounded long-standing development challenges; low- and middle-income countries face acute vulnerabilities and need stronger policies, institutions, and resources to bolster resilience.

In a speech delivered in Khartoum, Sudan, before the meetings, World Bank Group President David Malpass shared in these concerns.  With reversals in development threatening people’s lives, livelihoods, and long-term prospects, he stated that “This drastic narrowing of economic and social progress is creating a time of upheaval in economics, politics, and geopolitical relationships.”  He called for new approaches and urged that the development community “focus our efforts more, set clear priorities by measuring what works and what doesn’t, and rapidly scale up successes.”

The committee and Malpass underscored the urgency of expanding access to COVID-19 vaccines, both to save lives and to help restart economies.  The Bank Group is partnering with COVAX, the African Union, and UNICEF to help countries purchase and deploy vaccines, with IFC helping finance manufacturers of vaccines and related supplies, particularly in Africa.  In addition, the Multilateral Leaders Task Force has brought together the Bank Group, IMF, WHO, and WTO to help speed the delivery of vaccines and finance testing, diagnostics, and treatment. 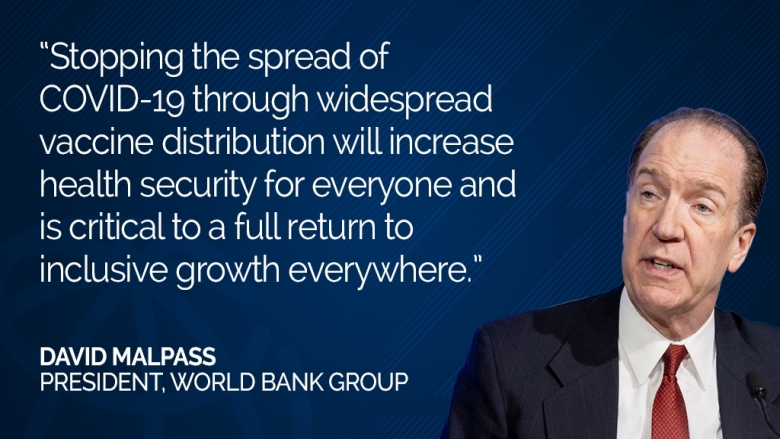 The committee underscored its support for the Bank Group’s comprehensive approach and rapid financing for recovery, tailored to the needs of its clients, from the poorest countries served by IDA to middle-income countries that have been hard hit, as well as those facing distinct challenges, such as fragility, conflict, and violence.  In his speech, Malpass outlined four key focus areas for determined action: achieving economic stability, leveraging the digital revolution, taking strong action on climate change, and investing in people through health and education.  Both there and in remarks at the Annual Meetings’ opening press conference, he also noted the critical importance of continuing efforts to make countries’ debt more sustainable and transparent.

On climate, Malpass emphasized the need for action on a much bigger scale: “we need thousands of large public-private projects that combine the world’s resources – from governments, MDBs, foundations, private investors, and the buyers of carbon credits” to reduce emissions, expand access to electricity, and adapt to a changing climate.  For its part, the committee welcomed the stepped-up ambitions of the Climate Change Action Plan, which increases Bank Group climate financing to an average of 35% over the next five years and offers countries additional support in meeting their Paris climate commitments and transitioning to cleaner energy.

The meetings took place with the 20th replenishment of IDA well underway.  The COVID response has brought Bank Group support for the poorest countries to an all-time high, largely through the IDA grants and highly concessional loans that donor countries help fund.  But with the 74 IDA countries’ economic output expected to remain 5.6% below pre-pandemic projections in 2022, a strong replenishment is vital to providing resources at a scale that can keep them from falling farther behind.

Despite the immense global challenges, the committee expressed its support for Bank Group’s role and approach in advancing recovery for its low- and middle-income clients.  In his speech, Malpass struck a positive note: “I feel optimistic that we will help countries avoid a lost decade." He added, “By working together, we will build a better development path.”

The meetings also included a series of flagship events that were open to the public and are accessible online.  These brought together global thought leaders for discussions of economic recovery, vaccines, climate action, and trade.