Have you Heard of Solar-powered Kilishi? A climate adaptation innovation in Nigeria 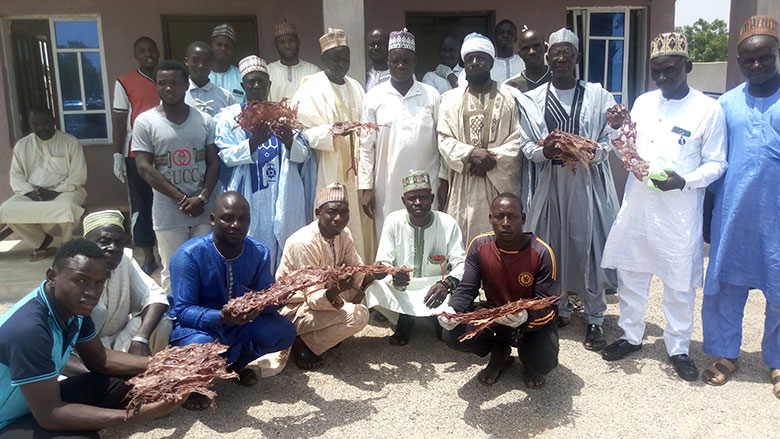 A group of Kilishi producers.

ABUJA, July 21, 2021—As he pulled on his new blue rubber gloves, Ibrahim Bature reflects on how barely a few months earlier, he was just another young migrant in Abuja, Nigeria’s capital city, earning 50,000 Naira (around $110) a month. A sum barely enough to sustain him and his family back home, but better than being in his village, Yaba, in the northern state of Katsina. Now he had returned to work in the new factory that had been set up in his hometown in 2020 – and is earning three times as much. The reason for his change in fortune, Kilishi, a favourite local food that originated in the dry northern part of Nigeria.

Kilishi or beef jerky, like South Africa’s biltong, is a Nigerian delicacy produced by family enterprises in small towns all over Katsina State. It is essentially made from thin strips of raw meat seasoned with spices (locally known as yaji – a mix of chilli, groundnut cake powder, pepper, and salt), smoked over woodfire and sun-dried in the open, with flies, birds, dust and other windblown particles settling on the drying meat. A laborious and time-consuming effort to make, it takes two to three days, and longer during the rainy season. This traditional method of drying Kilishi, asides being unhygienic, is also unsustainable with 100 kilos Kilishi requiring the use of 20 kilos of firewood. 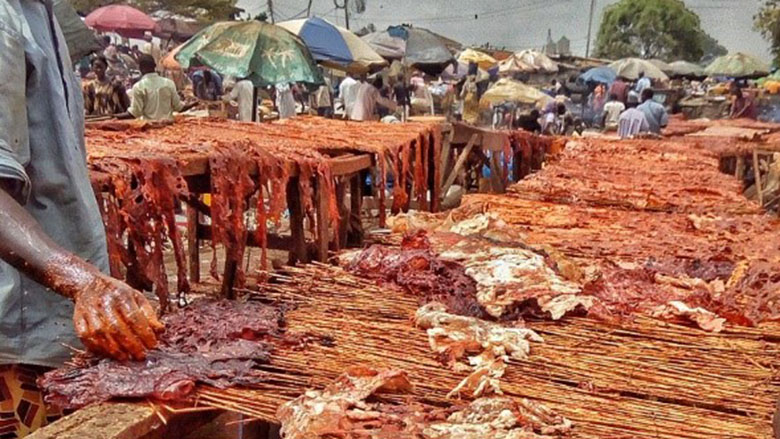 Nigeria has one of the highest rates of deforestation in the world – it lost around 410,100 hectare per year from 2005 to 2010 – according to Conservation International. Tree-felling and bush-burning worsen land degradation and desertification, which will likely worsen with climate change. The Nigeria Erosion and Watershed Management Project (NEWMAP), a World Bank supported project meant to address the severe sheet, rill and gully erosion that affects over 90% of Nigeria’s land area, gained an interest in Kilishi making primarily because of the firewood and charcoal used in its processing – since deforestation is a major national concern, especially in the arid northern part of the country.

In 2020, The Government of Katsina state partnered with the NEWMAP project to demonstrate a sustainable and innovative way of making Kilishi without charcoal and firewood. The initiative built a solar powered Kilishi factory – solar-powered meat drier domes, fuel-efficient kilns, heat extractors, security lights, borehole, and an office; bringing prosperity quickly to the local community, and creating employment opportunities for the youth who would have otherwise migrated to cities in other states. 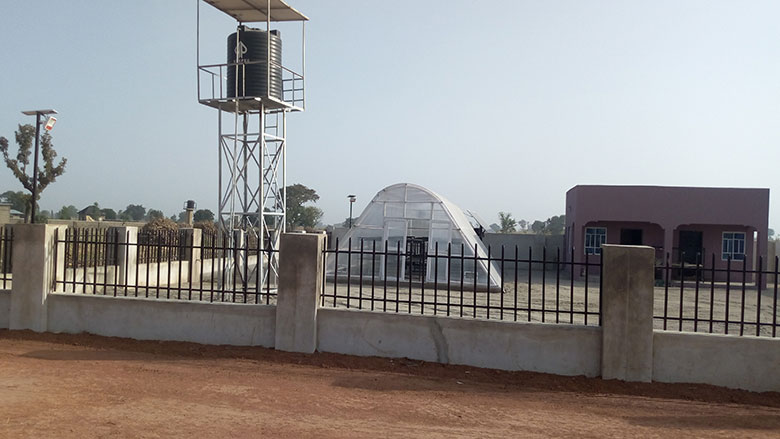 Ibrahim Bature speaks for many when he says: “We have returned home because of the presence of the factory. I earn over 150,000 Naira (about $367) per month. I am able to help others and our parents to pay school fees of our younger ones which they could not in the past - leading to a lot of problems including sending them out of school.”

The solar powered factory has led to a cut in production time from an average of 3-4 days to 3 hours (at peak sunshine); an increase in production capacity – 1,600 kg of meat (about the amount of beef from 8 cows) can now be processed per day – same quantity would take 20 Kilishi makers 2 weeks using the traditional sun-drying method. While production was barely sufficient for domestic consumption earlier, Kilishi is now being exported to customers in Kano, Abuja, and Lagos, while other states like Kaduna, Zamfara and Adamawa have expressed interest in placing orders.

Ai’sha Isa Malumfashi, who employs eight girls notes the surge in demand: “We used to make 30 kg of mixed chilly and groundnut cake powder a day before the start of the factory, but now we make up to 60 kg per day.”

Processing and drying Kilishi in solar drying domes eliminates the drudgery of doing so in the open air with the constant threat of rain, whirlwinds, flies, and birds contaminating the meat. The improved hygiene and taste of the solar-powered Kilishi has also increased its market value. 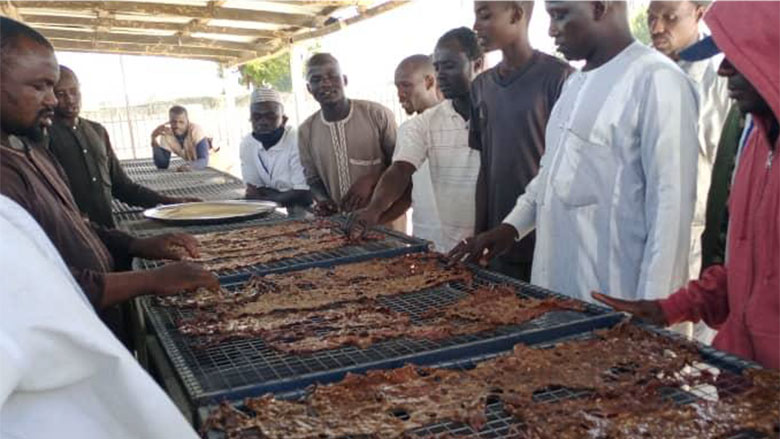 “Some youth left the community and moved to Abuja and other cities in search of menial jobs, but the moment the factory began operation, they returned home and registered to join the business. They are always thankful. You can see, jobs have been created for the youth and stopped rural-urban migration. This is not a less achievement. Everyone has a means of livelihood”, Alhaji Nasiru Hamza, the Yaba Village Chairman

Apart from the members of the Cooperative, who are the primary beneficiaries, several other people have benefited: security guards, cleaners, and office support staff have found employment at the new factory; the women who supply the chilly, and groundnut cake powder (from home), suppliers of packaging material, cattle sellers. oil sellers, animal skin buyers, and the Kilishi retailers who sell it to customers – and those who come to fetch water from the new solar-powered borehole drilled on site. 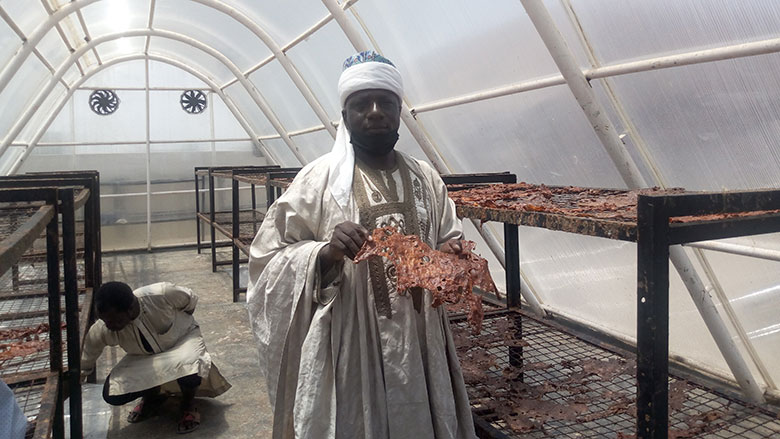 A local leader inside the new Kilishi facility. Photo: NEWMAP

While butchers are men and primary beneficiaries, women have also seen significant benefits as suppliers. Chairman Nasiru Hamza explains: “The value of Kwili Kwili (groundnut snack), groundnut oil, yaji (spice) and others, which are produced by women has risen. Women at home got a source of income by producing and supplying it to the factory. The butchers buy these items from the women and pay them. Virtually, women own the whole investment. Some Kilishi makers also mobilised their capital from their wives.”

While NEWMAP and the Katsina State Ministry of Environment hope this innovation helps in reducing deforestation and spreads to other areas in the state, the current success of the initiative is encouraging more members of the Mararrabar Kantara community to explore Kilishi production and more migrants to return home.