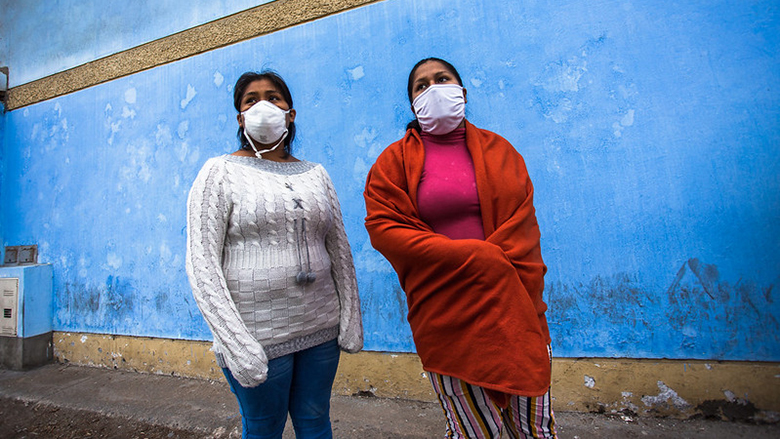 Women have quietly borne the brunt of the crisis and are the most affected in terms of employment and income losses: the current gender gaps in labor and education could cost the region 14 percent of its GDP per capita over the next three decades.

This coming March 8, International Women's Day, is shaping up to be a day with little to celebrate. There will be no presents, no “Happy Women’s Day” greetings, no celebrations. Almost a year after the pandemic was declared in several Latin American countries, the lockdowns that were imposed to mitigate the contagion have become a setback for much of the progress that had been achieved in gender issues in recent years. And the data confirms the worst fears: that Covid-19 is ravaging the most vulnerable populations in the region.

According to surveys carried out by the World Bank, female workers were 44 percent more likely than male workers to lose their jobs at the onset of the crisis. And while temporarily unemployed workers have begun to re-enter the labor market, job losses continue to persist at a higher rate among women: 21 percent of women who were employed prior to the pandemic report that they have lost their jobs.

Ximena del Carpio, Practice Manager for the Latin America and the Caribbean Poverty and Equity Practice Group of the World Bank, provides policy advice to governments. In the following interview, she explains the extent of the pandemic's impact on female workers.

Question: Why has the pandemic had a greater impact on women?

Del Carpio: I will beginning by discussing a substantial issue, which is that the drop in the female labor force participation rate has a high cost for countries in the region. A study by the World Bank estimates that the gender gaps in labor force participation and education could result in an average loss in Latin America and the Caribbean of 14 percent of its GDP per capita in the next three decades. Even prior to the pandemic, there was progress to be made. Only half of women of working age were active in the labor market (53 percent), compared with 77 percent of men. The pandemic has exacerbated job losses for all, but this is particularly true for women, and a recent study by the Bank confirms it.

There are at least three reasons why the situation is deteriorating. First, women tend to work in sectors which have been more heavily affected by the pandemic, such as sales, due to the need to restrict face-to-face interactions, as well as in occupations that do not lend themselves easily to working from home. Second, a high proportion of women are self-employed and work in the informal sector, that is, in vulnerable working conditions and jobs that cannot be carried out remotely. Third, due to the social norms of the region, the burden of household work falls primarily on women, and due to school closures, the amount of household work performed by women has risen, as has the time dedicated to caring for other family members, all at the cost of dedicating their time to other work.

Q: How can these data be measured?

Del Carpio: The best way is to “humanize” the statistics on female employment, observing what is going on inside of households so as to gain an understanding as to how day to day tasks are divided between men and women. For example, in Chile – where the situation is similar to what can be observed in the region and throughout the world – prior to the pandemic, women already dedicated an average of three hours more per day than men to domestic and caregiving tasks. If we add in lockdowns, working from home, daycare and school closures and the rise in caregiving these entail, it is not at all surprising that the pandemic is pushing women to the edge. According to the High-Frequency Monitoring Survey, a higher proportion of Chilean women who do not work report that they do not do so because they need time to care for children or sick family members (9 percent, compared to 0.7 percent of men). Opinion polls conducted in Chile support these findings: the 52 percent of women working from home during the pandemic indicate that the most difficult aspect of their work is trying make it compatible with carrying out household chores. At the same time, caregiving tasks are named as one of the limitations to returning to the labor market.

Q: Has any progress been made in terms of the inclusion of women in the labor market?

Del Carpio: The pandemic has hit many businesses hard, particularly those led by women. However, the impact also seems to be motivating those businesses with women at the helm to move toward digital solutions. The preliminary results of a global study by the World Bank (using data from the COVID-19 Business Pulse Surveys) on the differential gender impact of the pandemic on businesses show that, on average, women-led business ventures are more likely to use digital technology.

Q: How can we change the social norms that are often a barrier to integrating women into the labor market?

Del Carpio: One area where we can create change is in the care economy. Instituting paternity leave is one of the ways to begin this transformation. While it is difficult to establish causality, the correlation between paternity leave and the labor participation of women shows that, in countries such as Spain, where fathers have the possibility to care for their children after they are born, female labor force participation and employment rates are, on average, higher. However, establishing laws such as these does not guarantee that men will take advantage of paternity leave. Small adjustments such as reserving specific leave periods for fathers, increasing the flexibility of leave, or promoting the benefits of this type of leave amongst the public can influence behaviors and shift gender norms away from traditional roles.

Q: What can governments do to ensure that women are included in recovery plans?

Del Carpio: First, we must emphasize the importance of including women in the planning and decision-making processes. This is crucial for the economy, for society, and for families. Second, we must encourage policies that help to promote gender equality in a sustainable manner. One concrete example of how this can be done is to alleviate the increase in household responsibilities that fall on women and prevent this increase from becoming permanent. Alternative care services may also be guaranteed or extended to minors and other household members. Furthermore, the barriers faced by women in the labor market must be taken into account when reactivating economies. One way to do this is to create opportunities for women to successfully participate and start businesses in traditionally male sectors and professions.

In this regard, the World Bank provides gender analysis and sex-disaggregated data to assist in the design of programs and policies to respond to the crisis. For example, in Peru, the Bank made available data and evidence to assist in the design of fiscal stimulus programs that take gender into account, such as ensuring women can access financial support (for example, in the form of conditional transfers) and make effective use of the resources. It is also supporting programs that aim to promote gender equality in other areas, as is the case in Honduras. In Brazil, Mexico and Uruguay, we are supporting plans and strategies to end gender-based violence in its many forms, and to close the gaps in education and vocational training.