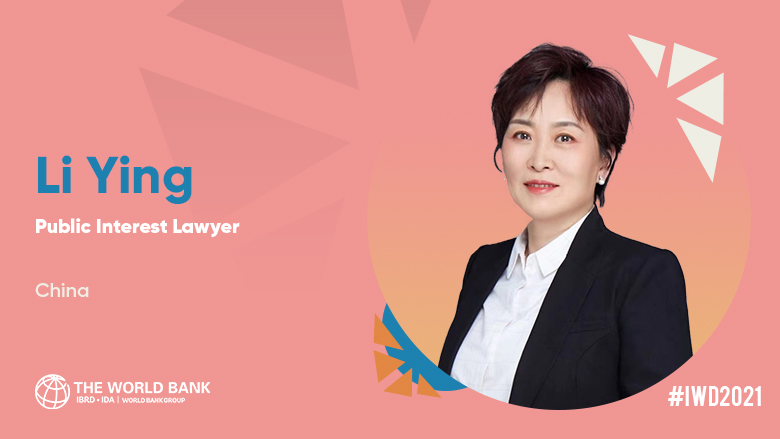 For International Women’s Day 2021, we’re sitting down with women across East Asia and the Pacific who are taking on leadership roles and working towards an equal future in a COVID-19 world. Li Ying has handled nearly 200 cases of gender-based discrimination and violence and provided legal aid to thousands of vulnerable women. She is also Director of the Yuanzhong Family & Community Development Service Center, a Beijing-based NGO that provides online and offline anti-domestic violence training courses and assistance to women.

The idea of protecting the rights and interests of women and children began in my teenage years. I am from a small mountain town by the river in central China. When I was young, I saw that women were always busy and working hard. On the wharf, they carried heavy loads on their backs and their bodies were bending forward. However, they had a low status in the family. They were not allowed to eat at the table and often beaten by their husbands. At that time, I thought I must help them when I grew up. In 1995, the Fourth World Conference on Women was held in Beijing, which opened a brand-new realm for me. I learned new words such as gender and domestic violence. I was most impressed when Hillary Clinton declared that "women’s rights are human rights". My first case as a lawyer involved domestic violence. The woman was beaten by her husband who broke one of her arms. I felt a deep pain when I saw her like this. And I decided to use the law as a weapon to fight for the rights of poor and vulnerable women and children and to make it my lifelong pursuit.

How was your work impacted by the pandemic?

Our work has increased, and our way of work has changed due to COVID-19.  In 2020, we received almost 1,000 calls through the national helpline service established by the Yuanzhong Family and Community Development Service Center that I work for. It was an increase of 21% compared to 2019, because of the restriction on offline services due to COVID-19. The victims’ needs for services also became more complex and diversified. We adjusted our work program, developed new service guidelines, and tried a business model that combines online and offline services.  We now offer online courses and expanded our channels for legal advocacy and public education.

Do you think the pandemic has presented new challenges for women in China? What challenges?

We have seen that more women are affected by gender-based violence, and such violence and gender discrimination have been on the rise due to COVID-19. In 2020, there were several serious cases of gender-based violence that attracted public attention. Some of these cases were very cruel. An example was Lamu who was burned to death by her ex-husband. As a frontline practitioner, I wish that people would pay more attention to gender-based and domestic violence. According to a report by UN Women, COVID-19 has worsened gender inequality. Some sectors where many women are employed, such as catering, hotels and domestic services, are the hardest hit, and more women are expected to lose their jobs and face financial difficulties.

Do you think the pandemic has created any positive changes for gender equality in China?

COVID-19 has posed more challenges for women. Last year, many gender-related issues drew public attention, for example, the focus on female medical workers and the discussion around “period poverty”, serious cases of gender-based violence, and Zhang Guimei (a school teacher dedicated to rural girls’ education) whose story triggered discussions about access to education for girls from poor families, as well as discussion about the value of a housewife’s work. Discussions around these topics had happened in the past, but rarely reached the breadth and depth as last year. With the impact of COVID-19, gender issues continue to arouse public attention, and we see a strong awakening of women’s consciousness and power. I think this will help promote gender equality in China.

This year's theme is 'Women in Leadership' - is there a female leader that inspires you? Why do they inspire you?

To me, Ruth Bader Ginsburg, former Justice of the US Supreme Court and a legal practitioner of the older generation, was a real person living among the people. It was reported that what Ginsberg said the most in her life was “I disagree”. This short sentence can take a lot of courage to say. I think the power of a role model is tremendous. A woman who is just like us, ordinary but extraordinary, gentle but tough. In the face of difficulties, we know that if she can do it, then we can do it too. This is how a female leader inspires me.

What do you think needs to be done to ensure more women end up in leadership positions in China?

Today, the number of women in leadership positions, especially those with decision-making power and influence, is low. This gender issue warrants attention and action. As President Xi Jinping said at the United Nations General Assembly to celebrate the 25th anniversary of the World Conference on Women in Beijing, "women are creators of human civilization and drivers of social progress, and they have made extraordinary achievements across all fields of endeavor." I think actions are needed at multiple levels. Measures can be adopted to increase the share of women at the decision-making level and enhance the visibility of female leaders; laws and policies can be introduced to ensure work-life balance, encourage men and women to share family responsibilities, and promote equal employment opportunities through parental leave, prevention of sexual harassment in the workplace, and anti-discrimination law.  Promotion of gender equality also requires a change in mentality and public awareness raising and education. We must build a new gender culture, get rid of traditional gender role stereotypes, and educate our children about gender equality.

What do you enjoy most about your work?

It is challenging, and inspires me to do my best, be passionate, use my intelligence and potential, and strive for results.

Do you have any advice for women in China?

Be yourself. In real life, many women are often ignored, neglected, and disregarded. They are bound by gender stereotypes, trapped in the gender inequality, and suffer from gender-based violence. I would like to advise my fellow women to be yourself - you are the most valuable. This is not a slogan. It is easier said than done. But the message needs to be communicated.

I would like to help more people. At the same time, I wish I would be less busy and have more time to be with my family, grow flowers, paint, play the piano, and see the world.