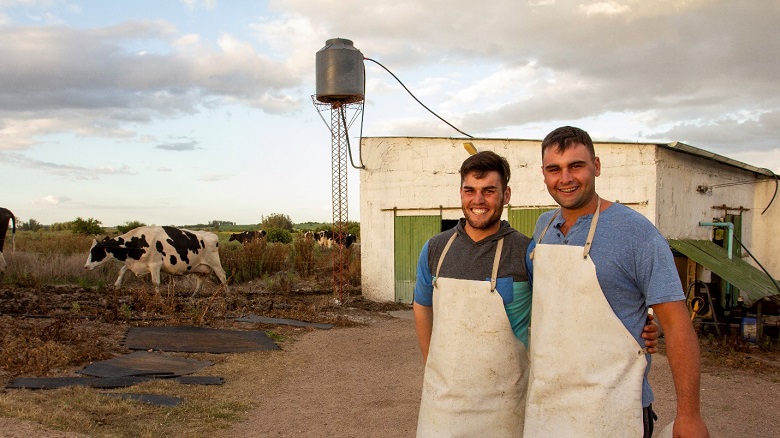 Uruguay produces enough milk to supply about seven times its own population.

In the days of the COVID-19 pandemic, when hardship and uncertainty has hit many economic sectors around the world, including meat and dairy production, Uruguay’s management of a previous crisis lends hope for a sustainable recovery. Uruguay, a country of 3.5 million people, produces enough milk to supply about 20 million people and is a major milk exporter. At the same time, Uruguay is one of a handful of countries in Latin America and the Caribbean where water is potable, in both urban and rural areas, and stickers in lavatories (“Uruguay – a country with safe tap water”) sometimes remind consumers of this precious national asset.

In the last decades, however, the two ambitions – high-quality milk and safe tap water -- have increasingly come to a head.

In March 2013, after years of dairy expansion, the residents of Montevideo discovered that the water they drank smelled and tasted bad. Although the bloom outbreak only temporarily overwhelmed the treatment capacity of the national water utility, it shed a harsh light on the deteriorating quality of the Santa Lucia river which supplies over half the country’s population in drinking water. An analysis identified diffuse contamination of the watershed, driven in large part by livestock, as 80% of the problem.

The story of the watershed (or cuenca) of Santa Lucia since the 2013 incident, and the investments made to gradually clean up dairy production, exemplifies the country’s journey to reconcile agriculture with stricter environmental norms. It takes place at a time when food systems, globally, are coming under pressure to meet citizens’ rising expectations when it comes to the safety, health and environmental impact of food and drink. And the impact of animals on people’s health is under added scrutiny because of the zoonotic nature of the new coronavirus.

The story begins at the rear end of a cow, when all that has not been digested and used to produce muscle and milk, exits the cow in the form of effluent waste.

In the past, a milk producer like Richard Irureta, who grazes 80 cows on 60 hectares in the department of Canelones, would simply hose off the waste that accumulates on the concrete area when cows are milked, and let the effluent seep downhill into a small creek that borders his farm. “I wish I could say otherwise, but it’s the truth,” acknowledged Irureta during a visit in February. The 47-years old farmer started working with cows when he was 10 years old, alongside his father. 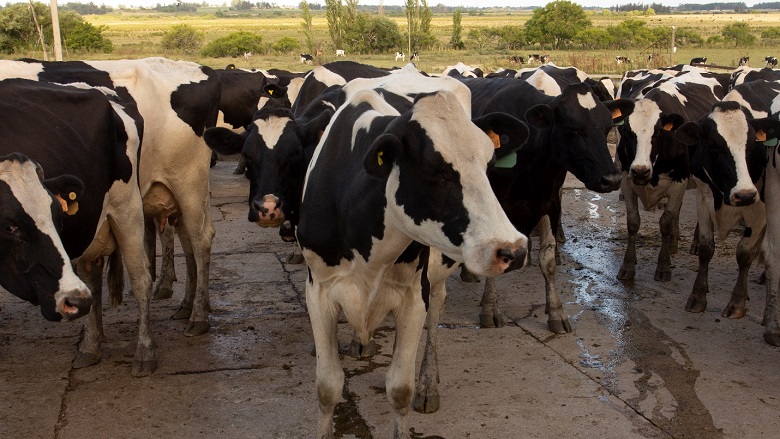 Today, his cows’ dejections are channeled into settling basins (or piletas). The mix of liquid and solid organic matter is then carefully sprayed on pasture using a pump system. In other words, nutrient-rich manure, a byproduct of dairy farming that causes trouble when it leads to eutrophication or cyanobacteria in water, is now collected and recycled as natural fertilizer, contributing to the growth of healthy crops and pasture. 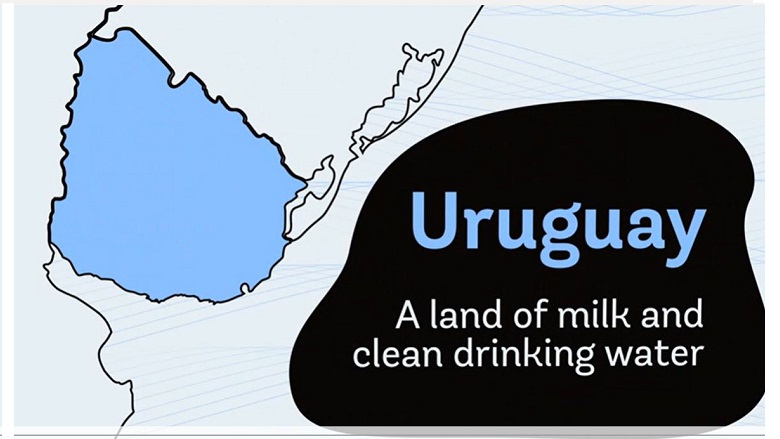 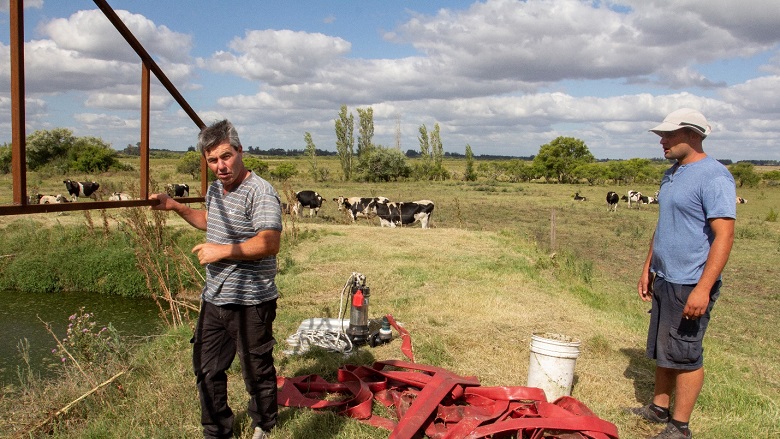 Richard Irureta (left) stands next to the settling basin which he uses to store effluent waste. The system helps reduce pollution of the Santa Lucia watershed and provides fertilizer for his farm.

About 500 out of 1,200 dairy farms in the Santa Lucia watershed have been equipped with this type of effluent management system. All producers in the watershed must also supply Sustainable Dairy Plans that are mapped and tracked in an integrated information system known as SNIA, as part of a broader national effort to better manage natural resources and improve decision-making using digital technology. The SNIA system and investments in effluent management were partly financed by the Sustainable Management of Natural Resources and Climate Change project, supported by a World Bank loan approved in 2011. For the Ministry of Livestock, Agriculture and Fisheries, which manages the ongoing investments, the vision of an environmentally-responsible productive sector is key to the country’s sustainable development and requires dedicated support in the form of new technologies and practices and financial support for small and medium farmers.

While dairy farms with over 500 cows were required to invest in the settling basin system on their own, financial and technical assistance was provided to small and medium dairy businesses that make up the bulk of the watersheds’ dairy landscape, with a focus on farms that posed the greatest risk to water quality because of their size or location.

For people like Cono and Carmen Puig, a couple currently milking 80 cows, or their neighbor Daniel Valdez who manages a small dairy operation with his brother in the department of Florida upstream of the Santa Lucia river, the $30,000 to $45,000 investment would otherwise be out of reach. 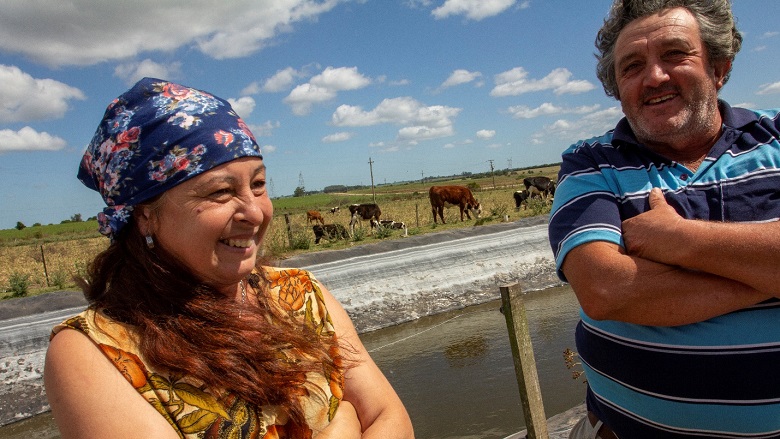 Cono and Carmen Puig have benefitted from financial and technical assistance to clean up their dairy farm.

The Puigs said they had “not taken a single day off in 21 years of marriage” - both because of the demanding nature of milking routines, and because they can’t afford it. “We work hard. We have to be here every day and can’t go on vacation, since we can’t afford to hire someone,” concurs Valdez.

In the long term, the system will increase dairy farmers’ livelihoods by reducing the amount of money they spend on chemical fertilizers at a time when costly inputs and fluctuating milk prices lead to uncertain margins. (The price of milk varies according to the international market since about 70% of Uruguay’s milk production is exported.)

For Irureta, who has used the reservoir system for four years now, the quality and timing of manure application also beats one-off chemical applications. He applies effluent waste to his fields, one hectare at a time, every 15 days: “The soil stays strong all year. The dry organic matter is particularly useful to improve the soil before planting sorghum,” he said.

By reducing the load of phosphorus and nitrates that enter the watershed, investments in improved effluent management systems reduce the need for costly treatments by the national water utility (Obras Sanitarias del Estado, or OSE) at the Santa Lucia river intake point at the well-named locality of Aguas Corrientes (“Running Waters”).

According to Juan Peregalli, who manages an environmental control and performance team at Uruguay’s national environmental body known as DINAMA, the multi-sectoral pollution control plan put together after the scare of 2013 is starting to show results: although milk production has increased in the Santa Lucia watershed, water quality has ceased to deteriorate, according to Peregalli. “It’s reached a plateau. But dairy farms are only one of multiple sources of pollution,” he cautioned. “Industries and households also contribute.”

The next step would be to expand pollution control beyond the Santa Lucia watershed to cover effluent waste in the rest of the country. “There are growing environmental demands globally,” said Peregalli. “It’s imperative that the agriculture sector adapt. The investment in sustainability is not just a cost; it’s important for the competitiveness of our country.”

Big milk buyers like Nestle and Unilever regularly inspect dairy farms to see how the milk is produced and evaluate the quality of Uruguay’s milk along multiple parameters. Although higher-quality milk, produced in more environmentally-friendly manner doesn’t necessary command higher prices, “it drives our access to markets. That’s worth a lot more than just price,” said Gabriel Oleginni, Manager for Cooperative Relations and Milk Production at Conaprole. The cooperative, which gathers over 1,800 milk producers, is one of the country’s leading export businesses with roughly $600 million per year in exports to 50 countries. All told, about 78% of Uruguay’s exports come from its agricultural value chains, including premium beef exports to stringent markets thanks to its unique nationwide cattle traceability system.

More sustainable dairy practices are also a crucial step on the path to restoring trust between food and drink producers in the countryside and savvy urban consumers. “Water quality is a question mark for me,” said Editha Sadewasser, a 72-year old city dweller who agreed to chat while purchasing fruits and vegetables at the Mercado Agricola de Montevideo (MAM), a recently-renovated and popular food market in the capital. “It has good reputation and I drink it, but you never know. We’re weary of everything these days. It’s become very hard to know what to eat.”

Farmers are increasingly aware of their responsibility in this area. “Minding the health of soil and water resources is expected of farmers today,” said Ricardo de Izaguirre, head of a 1,200-cow dairy operation which has self-financed the effluent management upgrade. “We do it because we needed to, as a big business. We also do it for the community – so we have the license to keep producing in the future.” 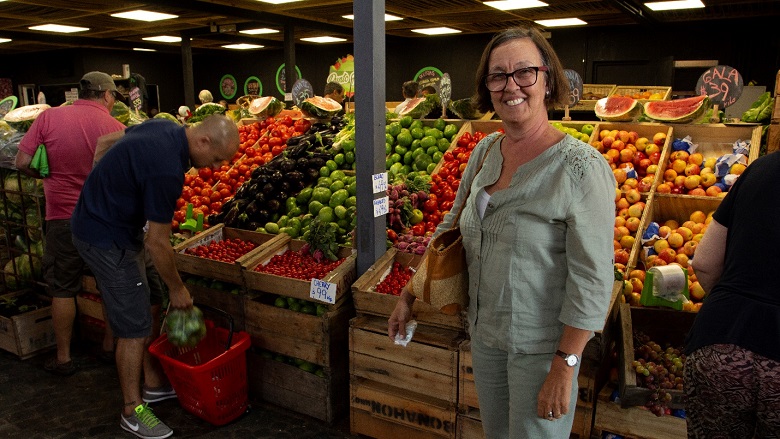 Water and food safety and quality matter to urban consumers like Editha Sadewasser, shopping in Montevideo.