Unshackling India’s Energy-Water-Agriculture Nexus: Is Solar Power the Panacea it Promises to be? 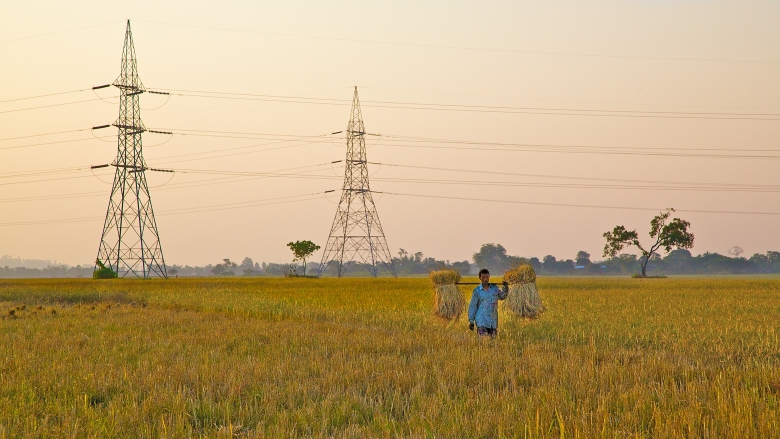 Groundwater levels in India are depleting at an alarming rate. While groundwater has played a key role in boosting agricultural production, the provision of subsidised power to farmers has led to the ubiquitous use of irrigation pumps and the over-extraction of this vital resource. Today,, largely because of the easy availability of largely free power to pump it out with.

The challenge – known as the energy-water-agriculture nexus – has led to a crisis in all the three sectors involved. . In peninsular India, the sustainability of groundwater-based agriculture itself is in question. At the same time, . To add to the challenge, climate change is disrupting agrarian ecosystems and livelihoods in adverse and unpredictable ways.

India has now reached a tipping point. “This is one of the most critical challenges facing India,” said Amitabh Kant, CEO, NITI Aayog.“Without dealing with water for agriculture, we will never be able to release water for our rural, urban and industrial needs.”

Recognizing that a highly collaborative approach is needed to tackle such a long-entrenched issue, the World Bank recently organized a workshop in New Delhi, in partnership with NITI Aayog.

The event brought together the entire gamut of stakeholders— from senior officials in the power, water and agriculture ministries, regulatory commissions and renewable energy agencies, to policy experts from development agencies, electricity distribution companies, academia, farmer associations and the private sector, including banks.

The workshop highlighted a series of state initiatives to break this long-standing nexus.

In Punjab, for instance, under the “Paani Bachao, Paisa Kamao” pilot, farmers are not only following better agronomic practices, their water and electricity consumption is down by 30 per cent. Though farmers still get free power, they are allocated a fixed quantity for each crop season. If they use less power, they receive an attractive payment. If they exceed the limit, they are not penalized. Supported by the World Bank, it took vigorous engagement before the farmers voluntarily agreed to have their power consumption metered. “They are also taking on the responsibility of ensuring that ground water depletion in Punjab can be slowed down,” said Ravneet Kaur, Additional Chief Secretary, Power, Government of Punjab.

In Gujarat, farmers formed a solar cooperative through which they are supplementing their incomes by selling the surplus power generated by the solar pumps in their fields.  These solar pumps provide farmers with reliable day-time electricity for irrigation, while the surplus generated is sold to the Madhya Gujarat Vij Company under a 25-year purchase power agreement. Since the farmers can now sell their surplus power to the grid, they pump up just as much water as they need, saving both water and electricity. The initiative - pioneered by the Solar Pump Irrigators Cooperative Enterprise (SPICE) - has helped farmers earn more than Rs.12.8 lakh in three years.

Piloted by IWMI in Dhundi village of Kheda District, efforts are on to replicate it state-wide under the Surya Shakti Kisan Yojana. Whether it will work on a large scale or not is hard to gauge as yet, but the model offers the promise of using solar energy in a more sustainable way.

The promise and perils of solarization of agriculture

Given the record drop in the cost of solar and solar-powered technologies, many other states are experimenting with such programs, too. The Government of India’s ambitious KUSUM Scheme also aims to leverage solar in a big way. It is targeting 35 lakh farmers with funds and support to set up  stand-alone solar pumps and grid-connected solar irrigation facilities, all aimed at providing clean, reliable power and doubling farmer incomes by 2022.

On the other hand, the “grid-connected” solar pumps offer an additional advantage. Since farmers can sell their surplus electricity back to the grid, they can earn an extra income that is also climate-friendly. The caveat, however, is that the earning from surplus solar electricity has to be higher than the value of extracted water if used in agriculture. A recent World Bank analytical study titled, “Grow Solar, Save Water, Double Farmer Income: An innovative approach to addressing water-energy-agriculture nexus in Rajasthan” has shown that it is possible to achieve the trifecta of increasing farm income, conserving water and saving electricity. State government and the state Discoms would also benefit financially.

Nevertheless, overall discoms are currently in a weak financial situation, which may impact their ability to buy large quantities of surplus solar energy. This may also pose a challenge for raising commercial financing to scale-up grid-connected solar solutions.

“Once the market is primed, other aggregators trading in renewable energy and local large customers could emerge.”

Getting the solar initiative right

. In actuality, many complementary actions are needed but the workshop helped distil wisdom that may help to “get solar right” - solar will work better for states that are prepared to undertake power and agricultural sector reforms, embrace irrigation efficiency and design and deploy solar programs to suit their local ecosystems. If states incorporate all these lessons from the pilots, there is higher likelihood of their farmers switching to more sustainable agricultural practices and the unshackling of the nexus.

“We look forward to changing it into a virtuous cycle or a synergistic cycle instead of being a nexus,” summed up NS Bains, Director Research, Punjab Agriculture University.

“Lighthouse India” is a World Bank initiative supporting systematic knowledge exchanges on good practices and innovations in development programs between Indian states and the world.