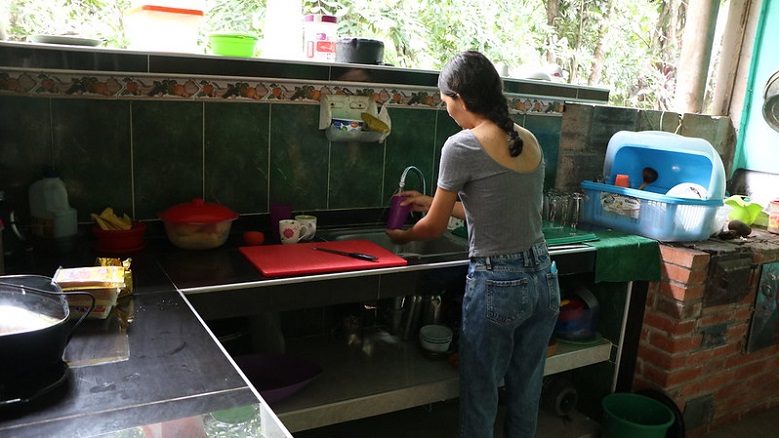 When women lose their jobs and with it their financial independence, they can find themselves dependent on a violent partner.

In addition to its heavy toll on human life and the economy, the coronavirus (COVID-19) pandemic is exacerbating existing weaknesses in the fabric of societies. Among these is gender inequality. In Latin America and the Caribbean, a region already plagued by the shadow pandemic of violence against women and girls, it is threatening to erase decades of progress toward gender equality.

Together with negative outcomes on gender equality documented in previous pandemics, these developments underscore the urgency of continuing efforts to empower women across the region by enhancing their voice and agency, eliminating violence against them, removing barriers to women’s ownership and control of assets, securing successful school-to-work transitions for young women, preventing teen pregnancies, and removing constraints to more and better employment.

“We need to address these gender dimensions in our response to the COVID-19 crisis”, says Miriam Müller, social scientist at the World Bank and co-author of the briefs Closing Gender Gaps in Latin America and the Caribbean and Gender Dimensions of the COVID-19 pandemic. “However, the crisis is also underscoring the urgency of eliminating gender inequality for good.”

In a region where already one in three women are affected by gender-based violence, the stretched capacity of response services reduces the protection and support available, which can contribute to a heightened perception of impunity among men.

A few examples from around the region highlight the seriousness of this issue. In Colombia, calls to a domestic violence helpline have jumped by 91% since stay-at-home orders were put in place. In Mexico, they’ve jumped by 36%. In Argentina, where 7 out of 10 murders of women and girls happen at home, emergency calls for domestic violence cases have increased by 25%. And in Bolivia, the city of Santa Cruz has reported the highest number of cases of both domestic violence and COVID-19. Alongside Paraguay, Bolivia also has the highest prevalence of murders of women and girls in South America.

In fact, we can be sure that the number of domestic violence incidents is much higher, because fewer than 40% of survivors report a crime or seek help of any kind. Reduced health service availability and less access to first responders make getting help more difficult, and women may also avoid seeking health services for fear of possible infection from the virus.

Participation in the labor market

Especially in lower-income countries, many women are engaged in informal work and other vulnerable forms of employment, such as self-employment in small subsistence businesses and domestic work.  This can leave them out of formal social protection measures such as unemployment insurance, according to the World Bank’s Gender Dimensions of the COVID-19 Pandemic brief.

In addition, more women than men work in some of the hardest-hit industries, such as retail, hospitality, and tourism. In the Caribbean, where many economies depend heavily on tourism, some countries will see half of the working population lose their jobs.

Women, traditionally responsible for caring for children and the elderly, often remain in charge of caring for the ill as well during a disease outbreak. Women will likely experience a significant burden on their time given their multiple care responsibilities as school closures and confinement measures are adopted.  This could lead to reductions in working time and permanent exit from the labor market. Even before the pandemic (in 2018), only 52% of women participated in the region’s labor market, versus 77% of men.

Besides increased levels of violence and loss of financial independence, there are other dimensions of gender inequality exacerbated by the pandemic. The shift in resources can disrupt key health services for women and girls, such as reproductive and sexual health services, including family planning. There is evidence of increases in both teenage pregnancy and maternal mortality due to a lack of critical resources in similar crises.

In a region that has the second-highest adolescent fertility rates in the world, the pandemic poses a potentially enormous setback for efforts to reduce teen pregnancies. The highest adolescent fertility rates are found in the Dominican Republic (94 births per 1,000 women aged 15-19), Venezuela, Nicaragua, Panama and Ecuador, according to the brief on Closing Gender Gaps in Latin America and the Caribbean.

What can be done

Bolstering first-response systems for domestic violence, expanding shelters and temporary housing for survivors, mental health care, and reducing the perception of impunity for perpetrators are all vital steps, according to UNWomen. Cash transfer programs for the most vulnerable groups, including women-only households, will be also necessary, as will programs to support women´s return to economic activity and efforts to ensure access to key health services for women and girls, such as reproductive and sexual health care.

The brief Closing gender gaps in Latin America and the Caribbean highlights not only the gender gaps in the region before COVID-19, but also examines some innovative projects where the World Bank is helping client countries close these gaps. Learning from those experiences, as well as expanding and broadening the scope of the efforts that work, is more urgent than ever before to prevent major setbacks in gender equality.