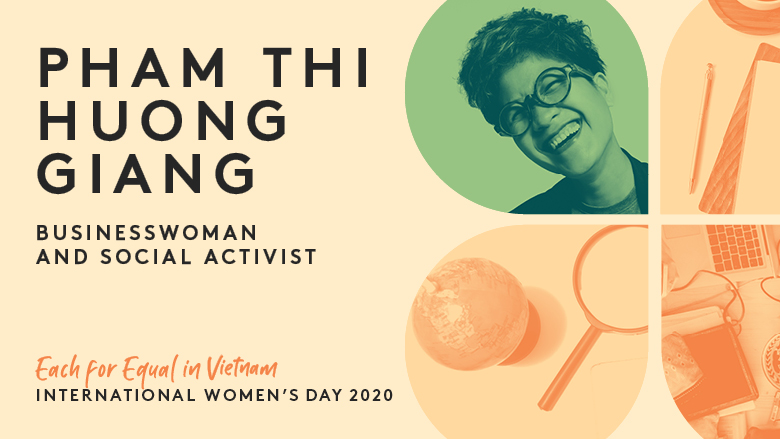 For International Women’s Day 2020, we’re getting to know the pioneering women across East Asia Pacific who are breaking barriers and creating change for the decade ahead. Pham Thi Huong Giang is founder and president of SONG (LIFE) foundation, a non-profit dedicated to promoting sustainable ways of life in harmony with nature. Meet Pham.

You are now seen one of the most prominent social activists in Vietnam. Can you tell us more about yourself and your work?

I am the founder and president of SONG (LIFE) foundation—a non-profit dedicated to promoting sustainable ways of life, in harmony with nature. One signature initiative of ours is to build resilient communities in disaster-prone areas. Since 2013 when we started, we constructed more than 700 resilient houses for impoverished families in seven provinces.

Another initiative is about planting trees in both urban and rural settings. The idea is that a when a child is born, his or her parents will plant a tree to give back to nature. It is a way for humans to reconnect to nature and appreciate its life-giving aspect. Last year, we planted some 17,000 trees in Ho Chi Minh City and the number keeps growing.

In between trips to the field, I oversee a company working in brand consultancy and communication.

How does your NGO differ from other NGOs or international organizations which pursue the mission of reducing poverty?

We are a community-for-community organization and we don’t preach, we act. There are many communities in Vietnam who live in houses that could be swept away by landslides or floods in the blink of an eye. Despite such vulnerability, they are reluctant to leave the land that has been passed on through many generations in their families. The sense of being uprooted is just too much. Whereas some relief efforts try at resettlement housing—temporary or permanent—we aim to provide safe and durable accommodation right where they belong.

We build the houses not for them but with them. Our architects make sure that the structure of the new house is robust enough to withstand extreme weather events, and that the house is made in a cost-effective way and has flexible spaces for further upgrades should needs arise. Other factors such as aesthetics and usability are for them to decide.

In the spirit of true ownership, they are required to chip in half of the upfront costs and have their hands on in every stage of the construction process, from sourcing materials to hiring builders. Money, time, energy, everthing they’ve got—they put it all in. That’s why they beam with pride when the house is completed. They also gain confidence throughout the process. True, it is a house-building endeavor, but it might as well be a character-building experience.

A resilient house is the first start. We also work with them to find a more sustainable livelihood in the changing climate and how to build more harmonious communities. Ultimately, we want to make sure any positive impacts our work brings about will last or lay the foundation for something even better. This is impossible unless the local communities are treated as equal partners and their knowledge and wisdom is respected and utilized.

What propelled you to set foot on this path?

My grandma was such a big influence in developing a great sense of empathy for others in me. Since I was a child, I was attuned to the hardships of other people and tried to help them out whenever I could. That explained why I started my career working for an international development organization, co-ordinating a project to assist farmers in the coastal areas.

It was not until 2009 that it became clear to me what I wanted to do for the rest of my life. In that year, the central part of Vietnam was hit by some of the deadliest storms and typhoons in history. I visited village after village and two things struck me hard: how vulnerable those communities were to natural disasters and in a broader sense, and how powerless human are against an angry Mother Nature. She could be fatally destructive if human continued the transgressions against nature in the quest for growth and material gains.

My mission since then is to build resilient communities and promote a sustainable way of life in harmony with nature.

Do you have a favourite quote or saying?

“Where there’s a will, there’s a way”—This is true for you, for me, for everyone. Let me illustrate this point with a story of an old lady we worked with a few years ago. She was living by herself in a dilapidated wooden house. She only had VND10,000 in cash. But for her to join our house-building program, she needed to contribute at least VND25 million. Have you ever found yourself in a situation when the down payment is 2500 times the size of all that you’ve got? That sounds crazy but it was exactly her case. She seemed unfazed and asked us to help her figure it out. We brainstormed together and found that she could earn a significant amount of money by dismantling her house and selling the timber. She did that but it covered only 40 percent of the needed amount. Then she reached out to her three daughters who lived far away, convincing them to make up the rest. They did, she accumulated enough money, and the rest is history.

Where do you see Vietnam in 25 years?

There have been dozens of scientific reports projecting a dire future of Vietnam against the backdrop of climate change. The Mekong Delta continues sinking and stronger storms and typhoons will ravage our extensive coastline more frequently. If these trends prevail, I can see that Vietnam will experience more of the detrimental impacts of climate change 25 years from now.

Having said that, I also envision Vietnam being a more resilient nation and its citizens more environment-conscious. We will be better prepared to cope with natural disasters and climate change impacts—or so I hope. The reason behind my optimism is because I notice an attitude shift towards environmental issues. The debate about the compatibility between economic growth and environmental sustainability has started to gain traction in the public discourse, which is an encouraging sign.

How do see gender equality in Vietnam and what’s to do about it?

Vietnamese society is among four Asian countries heavily influenced by the Confucian teachings which expect women to operate from a subordinate position. I have to say such expectation, even though less overt today, is pretty much still there. I always think that any shift in societal norms begins from changing mindset.  And I’d rather try to imprint new norms of behaviour on the next generation than trying to change the previous ones. Thanks to an increasingly interconnected world, it is now much easier for the young to gain exposure to gender equality.  As long as Vietnam stays open to the world, changes will find their way to those who are most receptive.

If you could use one word to describe women in the East Asia Pacific, what would it be?

Grit. From offices to households, I could see how women function like glue to hold things together, but also like oil to get things going. Every woman I’ve met is a warrior in her own way. I guess that’s the spirit when you must wear many hats and under the expectation to wear them perfectly. I rarely see a woman give up when obstacles get in their way—they only get more resourceful.

What is your big hope for women in this region in the future?

My hope is that eventually when our societies continue evolving, more and more women in the region will have the freedom to be who they are, do what they love and live a fulfilling life. I want to see women carve out their (deserving) places in high-level leadership positions or sectors that are traditionally dominated by men.