Working on behavior: A new approach to achieving development objectives 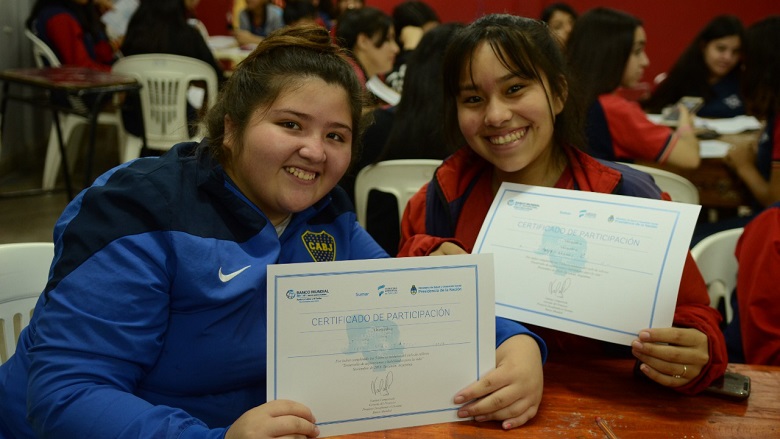 Three examples in Argentina demonstrate the positive effect of incorporating behavioral sciences when working with youth and the environment.

Apathy, frustration, a lack of perseverance, and poor self-esteem are some of the behavioral factors that influence how we think and how we make decisions and act. Public policy’s development is increasingly taking these factors into account to ensure a greater impact.

“Traditionally, public policies have assumed that beneficiaries are entirely objective and rational in their decision making. The reality is that we constantly act impulsively, and our decisions depend on others and subjective views of the world. Behavioral sciences contribute to deliver more tools for designing and implementing policies, providing solutions that are closer to the way we effectively make decisions,” says Jorge Luis Castaneda, an economist with eMBeD, the behavioral sciences unit from the World Bank.

Three recent experiences in Argentina have shown how to design creative solutions for dealing with complex and diverse challenges in the areas of prevention of teenage pregnancy, the employability of young people, and waste recycling.

The pilot project Changing the odds targeted 900 teenagers between the ages of 13 and 15 who in 2018 were in their first or second year of high school in public schools in Salta and Tucumán. In these provinces, the fertility rate was 83 births per 1,000 teenagers in Salta and 72 in Tucumán, both above the national average of 68.

The project sought to promote greater awareness of teenagers in vulnerable communities about the responsible decision making and the establishment of life goals. Through a series of workshops, they worked to develop the socio-emotional skills, including educational and employment aspirations. The sessions specifically focused on improving self-image and self-esteem, building the skills needed to face challenges, looking at gender roles and stereotypes, and working on the development of life plans that promoted education as a priority for personal development.

“The results of the study are encouraging. We observed clear positive impacts on more equitable beliefs and attitudes towards traditional gender roles. Most of the participants in the workshops are likely to support a vision of motherhood as one of the role, and not the main role for women; jealousy is not seen as a way to show affection, and women can also contribute to the financial support of the household,” indicated Vanina Camporeale, World Bank Health Specialist, who led this initiative.

In contrast to students in schools that did not receive the workshops, the participants in the sessions were better able to self-regulate, had more empathy and respect, and had a greater growth mindset and autonomy. As for the impact on more responsible sexual attitudes and practices, after attending the sessions, 23 percent of students stop thinking that it was out of line to ask their sexual partner to use protection and, among the sexually initiated, there was greater reported use of contraceptives.

“An isolated project cannot reduce early childbearing rates, but this new focus can strengthen the influence of traditional programs on the prevention of unwanted teenage pregnancies that are currently being implemented in Argentina,” said Camporeale.

The municipality of Trelew, in the province of Chubut, counts with a modern recycling plant and a differentiated waste collection system for households and businesses. However, only 3 percent of waste is recycled.

“We decided to implement an initiative based on behavioral sciences to understand the current obstacles to recycling. The information collected enabled us to design a communications strategy that directly targeted those obstacles,” indicated Carole Megevand, Program Leader of the Sustainable Development and Infrastructure Program in Argentina, Paraguay, and Uruguay.

As part of a successful collaboration with the municipality of Trelew and the German Development Institute (DIE), letters containing simple motivational messages along with calendars reminding the collection days were distributed to around 5,000 households and small businesses. Two weeks later, the team collected and assessed the waste from 900 homes randomly selected, revealing that the number of families who separated their garbage and put it out on the correct day of the week had doubled.

Additionally, the project was highly cost-effective, with an average cost of just US$0.55 per participating household, in contrast with the economic and ecological benefits resulting from more sustainable and effective waste management.

Between 2017 and 2019, a pilot project was carried out as part of the program Youth with More and Better Jobs, from the Ministry of Production and Labor. The aim was to tackle some of the difficulties faced by the young participants, such as a lack of knowledge of the requirements and benefits of the program, the complicated registration process, and the flawed expectations of the applicants.

The project involved 6,700 participants in more than 50 municipalities across the country, who received more detailed training on improving their motivation and providing them with practical strategies for planning and achieving goals, and who also worked on the idea that it is possible to develop skills with effort and dedication. The young people who participated in the sessions increased their registration in other services offered by the program by 20 percent.

“The initiative was a successful example of collaboration with the various implementation units in the Ministry and showed that interventions that have better-structured content and that guide and support participants more actively do make a difference,” said Marcela Salvador, World Bank Task Team Leader for the project.