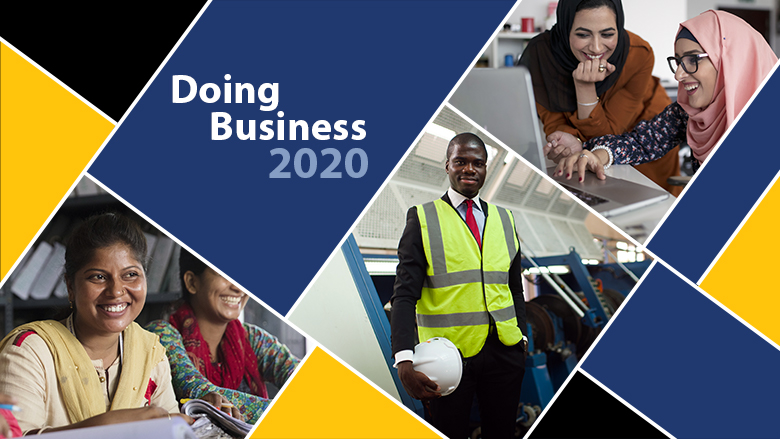 Regulation exists to protect workers, public safety, businesses, and investments. But inefficient or inadequate regulation can stifle entrepreneurial activity and business growth and impact the ease of doing business. It takes over 200 hours to complete export border requirements for maritime transport in Cameroon and Côte d’Ivoire. In contrast, it takes only 10 hours in Singapore. Border compliance costs for export at seaports in Gabon average over $1,600, but just over $300 in Mauritius.

Burdensome rules may drive businesses away from the oversight of regulators and tax collectors into the shadows of the informal sector or out of the country in search of a more supportive business environment. Foreign investors may shun economies where rules prevent economic activity from flourishing.

Cumbersome red tape holds back more than individual businesses or investors: an economy’s ability to grow sustainably may suffer. Economic freedom to do business goes hand in hand with economic development and a thriving private sector, and these in turn underpin poverty elimination and the pursuit of shared prosperity.

Doing Business 2020 measures regulations across 190 economies in 12 business regulatory areas to assess the business environment in each economy. Ten of these indicators were used to estimate an ease of doing business score this year, over the 12 months ending April 30, 2019. This is the 17th edition of a study that has motivated governments worldwide to undertake business reforms with the goal of bolstering sustainable economic growth.

The study looks at rules affecting a business from inception through operation to wind-down: starting a business, dealing with construction permits, getting electricity, registering property, getting credit, protecting minority investors, paying taxes, trading across borders, enforcing contracts, and resolving insolvency.

What is measured in Doing Business?

Best places to do business 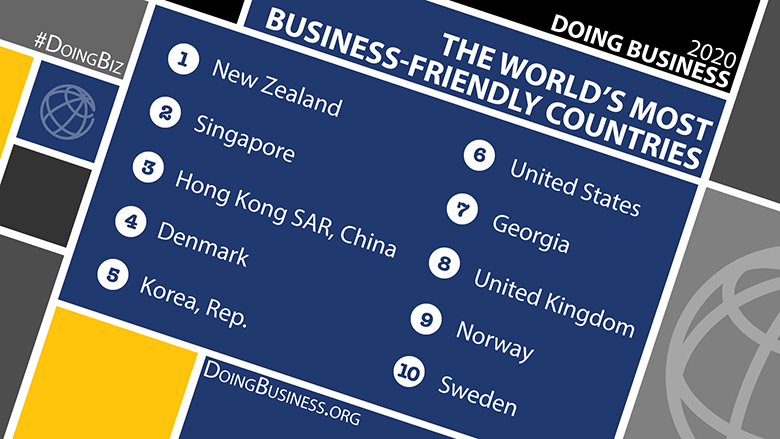 In general, the 20 top performers have sound business regulation with a high degree of transparency.

Most improved places to do business 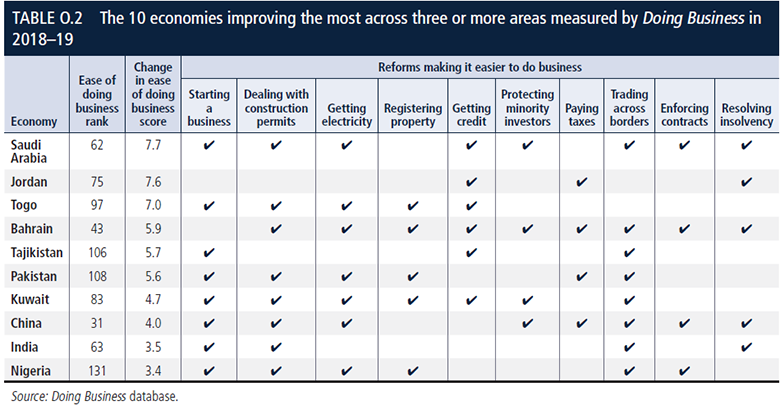 In Saudi Arabia, authorities established a one-stop shop for company incorporation and eliminated the requirement for married women to provide additional documentation when applying for a national identity card. The country also streamlined and merged pre- and post-registration processes.

Jordan joins the top reformers for the first time with three reforms. The economy strengthened access to credit by introducing a new secured transactions law, amending the insolvency law and launching a unified, modern and notice-based collateral registry. In addition, Jordan made paying taxes easier by implementing electronic filing and payment for labor taxes and other mandatory contributions.

With five reforms to business regulations, Togo ranked among the world’s top 10 most improved economies on the ease of doing business score for the second year in a row and for the third time in the past five years. Authorities abolished the requirement to notarize company documents and reduced the time to register a company. The government streamlined the process for getting a construction permit and made it easier to connect to the electrical grid. It also facilitated the processes of registering property and getting credit.

Among other top reformers:

Reforms in every region – More in some than others

Overall 115 economies around the world implemented 294 business regulatory reforms making it easier to do business.

The Middle East and North Africa was one of the strongest regions in implementing business-facilitating reforms, carrying out 57 regulatory changes. Economies of the Gulf region were particularly active, carrying out 35 reforms. Four economies in the region are among the 10 most improved globally. Getting a construction permit in the region takes 28 days less than among Organisation for Economic Co-operation and Development (OECD) high-income countries. Reform efforts were most active in the areas of getting electricity and dealing with construction permits. However, getting credit in the Middle East and North Africa remains harder than anywhere else an in the world. In addition, barriers to female entrepreneurs are widespread across the region.

Economies in Europe and Central Asia accelerated an already strong momentum to improve business climates and carried out 56 reforms. The region hosts two of the world’s top 20 economies to do business – Georgia ranks 7th while North Macedonia places 17th. The region implemented nine reforms in the area of paying taxes. Since Doing Business began to research business climates, 22 economies in the region have allowed electronic filing of taxes. The region also carried out six reforms in enforcing contracts. And the economies of the region stand out on the ease of registering property: the costs of transferring a property are lower on average than among OECD high-income economies.

South Asian economies maintained a solid pace of regulatory reforms, as both India and Pakistan earned spots among the top most improved economies. India carried out four reforms, including making getting construction permits easier. Pakistan implemented six reforms, including improvements to getting electricity. However, Afghanistan, Bhutan, the Maldives, and Sri Lanka made no regulatory changes. Resolving a commercial dispute in the region takes on average almost twice as long as among OECD high-income economies.

While many economies in the East Asia and the Pacific region make doing business relatively easy, the pace of reforms has slowed from previous years. Reforms were implemented in fewer than half of its economies (12 out of 25). Even so, five East Asia and the Pacific economies are among the top 25 global performers, including Singapore (2nd), Hong Kong SAR, China (3rd); Malaysia (12th); Taiwan, China (15th); and Thailand (21st). China jumped in the ranking to 31st and is among the top 10 improvers for a second consecutive year.

Economies of the Caribbean carried out a record 19 reforms and 11 of 16 economies implemented business-facilitating reforms primarily focused on starting a business, getting electricity, paying taxes, and enforcing contracts.

Latin America lagged other regions of the world in smoothing the path for domestic small and medium-size enterprises to do business. No economy in the region has appeared in the 10 top improvers list over the past two years and no Latin American economy ranks among the top 50 best places globally to do business. At 60th, Mexico remains the region’s top-ranked country, but for the second year in a row Mexico did not introduce any major business climate improvements.  However, there are some bright spots. Colombia has implemented a total of 37 reforms since 2005 and continues to lead reform efforts in the region. The country, ranked 67th globally, initiated three major reforms over the 12-month period to May 2019.

Doing Business is in its 17th year, and since its inception, 178 economies have implemented 722 reforms in the area of starting a business, reducing or eliminating barriers to entry. Despite such improvements, however, considerable gaps still exist between developed and developing economies on most Doing Business indicators.

However, the incentives are clear. Economies that score well on Doing Business indicators benefit from a higher level of entrepreneurial activity. This in turn generates better employment, greater government revenue and higher incomes. In addition, where burdensome and protracted regulatory processes exist, the temptation to resort to corruption to get things done may be greater.

The results of Doing Business 2020 demonstrate that in almost every economy in the world, there is some scope to streamline or expedite rules to make it easier to do business, allow entrepreneurship to flourish, and make it possible for economic activity to reach its full potential.