Ms. Keoula Souliyadeth has been working on the Resettlement Management program under the Nam Theun 2 (NT2) hydropower project for over 20 years. As the former Vice President of the Lao Women’s Union of Khammouane Province, Keoula has always put gender equality and women’s empowerment at the heart of her work. She is currently responsible for work plans including resettlement, land titling, downstream support, and healthcare, and she strives to ensure that women are included in the organizational structure at all levels and involved in the implementation of all work.

“The resettlement management plan has paid strong attention to gender equality. My job is to ensure that women are involved in the implementation of programs and that they understand the process of adaptation from their old to their new lives since moving.”

"Women have better access to information. They know they have rights to decide for themselves. They can choose how they want to lead their lives." 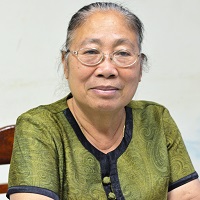 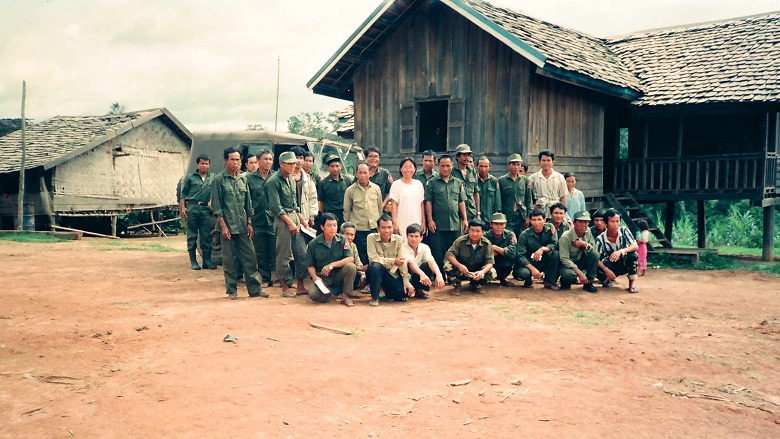 Keoula Souliyadeth with local villagers during the consultation period prior to the project start.

Keoula began her involvement with NT2 helping with the village consultations prior to resettlement. At that time, it was difficult for a young woman to earn respect working side by side with men, as women were perceived to be weaker and less educated. The remoteness of the villages in those days was an additional challenge, but Keoula remained passionate about connecting with women, even in the most difficult to reach communities. In rural areas, women were often excluded from information and decisions. Men, as the head of the household, tended to have the ultimate decision-making power in the family, even decisions about having children.

Keoula’s passion and courage came from wanting women to become self-reliant and, ultimately, to see gender equity in Lao society. She wanted to become an example for female colleagues and demonstrate to her male peers that a woman can be as independent and work as hard as men. As a role model, she was able to empower district Lao Women’s Union members to join her village consultation work in remote areas. She encouraged female villagers to take non-traditional roles by taking part in decision-making discussions.

“Before moving to the new area, these villagers lived in very remote areas with no proper road access. Empowerment and even sharing information was challenging, particularly for women. Women were not educated. They did not understand some concepts related to healthcare and childcare. Women were usually left out of village meetings or discussions due to their lack of education and perceived lack of understanding," she says. "During the consultations prior to resettlement, I had to empower them to get involved in the discussions, so I could understand their thoughts, and could make them aware of the resettlement policy to be prepared for the move.”

Ms. Aeng, a resettled villager currently living in Buama village, says that in her old village women worked harder than men. They were not only the main caregivers for children but also the main source of farm labor, while men would often go to meetings or gatherings.

“When I was in my old village, women’s lives were very difficult," Aeng reflects. "We worked physically hard. We had our children on our backs while we carried a full load in the front. Since moving to the new village I have learned about women’s rights and gender equity through community outreach a few times a year. I get to travel to new places for trainings and I see many different things, which has opened my perspective.” 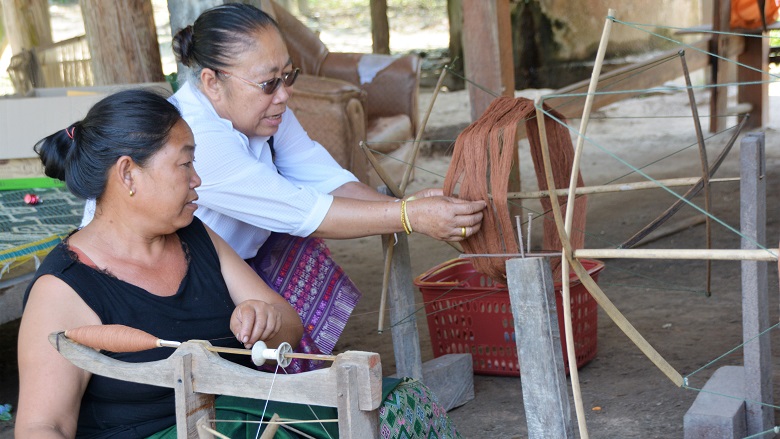 Keoula Souliyadeth with the weaving group at Sop Hia village

Keoula sees how the lives of women like Aeng have changed significantly, “Women have better access to information. They know they have rights to decide for themselves. They can choose how they want to lead their lives. Learning about healthcare and family planning has been a turning point for women. They now know how to take care of their children’s health, and many choose to have only 2-4 children instead of 14, as in the past. When women have fewer children and are healthier they can engage in economic activities to earn a living for their family.”

In addition to improved healthcare and family planning, women now have more income generating opportunities. Apart from subsistence farming, some women choose to do off-farm work such as weaving, making handicraft products, or fisheries, now that they have better access to markets. Electricity access to homes has also expanded their possibilities, with the ability to work or study at night.