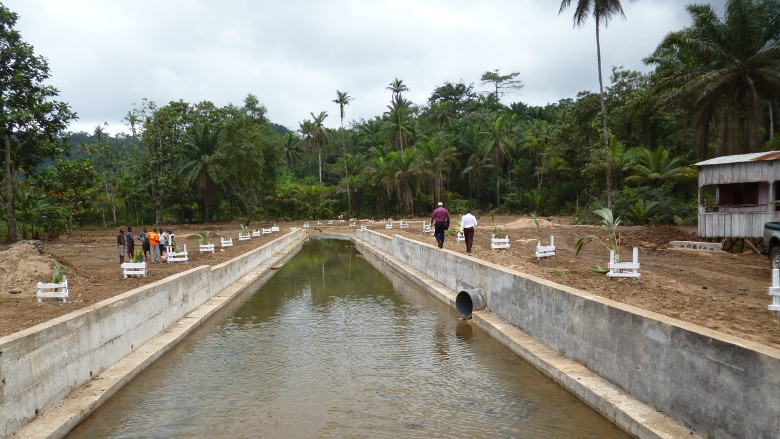 Better land use planning, construction of green and grey infrastructure, and tree planting to stabilize the shoreline have helped mitigate the impacts of flooding and landslides. © World Bank Group

SAO TOME, August 19, 2019 – A couple of years ago, João Fernandes had one of the biggest scares of his life. His small village of Santa Catarina was flooded by a heavy rain accompanied by a strong windstorm.

“I rushed home, and on the way, I saw houses collapsing and neighbors struggling to save whatever they could,” said Fernandes, who had been fishing when the storm hit. “My house was already tilted to one side and did not seem to be able to resist the strong storm. Water had invaded the house and our belongings were floating. My wife was in the last days of our second pregnancy and could barely move. I just prayed that the house would not collapse and that the weather would improve.”

Flooding is common to Fernandes and many people living in coastal villages across Sao Tome and Principe (STP), which have been affected by climate change, driven by both natural and man-made causes such as air pollution. As lower areas are flooded by sea water during bad weather, upper areas are invaded by water mixed with mud sliding down the mountains with heavy rains.

"To reduce the incidence of floods in this community, with the Adaptation to Climate Change Project, we have built dikes, drainage system and breakwaters to help channel the water into the sea and worked with the communities on voluntary relocation to safer areas,” said Arlindo Carvalho, West Africa Coastal Area STP Project Coordinator. “The first four coastal communities can now safekeep their house, livestock, canoes, and assets.”

After the success of the Adaptation to Climate Change Project—financed by the Least Developed Country Fund managed by the Global Environment facility (GEF)—support for STP’s coastal communities has been increased through the West Africa Coastal Area Resilient Investment Project (WACA-ResIP). WACA-ResIP, also supported by the International Development Association (IDA), provides support to Benin, Cote d’Ivoire, Mauritania, Senegal and Togo, and aims to strengthen the resilience of coastal communities and targeted areas in Western Africa and scale up knowledge, finance and dialogue.

Through the WACA ResIP project, eight additional coastal communities have developed and will implement adaptation strategies specific to their needs. Better land use planning, construction of green and grey infrastructure, and tree planting to stabilize the shoreline have, together, helped mitigate the impacts of flooding and landslides on households in the pilot sites, approaches which would now be replicated. The combined effect of these measures is that flooding events have less impact and natural disasters are shorter.

“I am part of the families most affected by the floods and mudslides, so we volunteered to be relocated," said Fernandes, whose family home was one of the first residences built in safer areas in the first phase of the WACA project. "I feel very good that my family will be safer now and we could have a normal life away from the coast. We have learned one lesson: we should not build houses in places where we are not allowed.”

To make coastal villages more secure and reduce the probability of deaths, WACA ResIP created patrols of trained volunteers, through local risk committees who provide early-warning, identify risks of flooding and landslide, and carry out maintenance work to reduce risks. Knowledge on how to handle risks during bad weather is also cross-fertilized among senior and junior fishermen to increase resilience.

By the end of the project, an estimated total of 20,730 people, nearly half of them women, will benefit from the project.