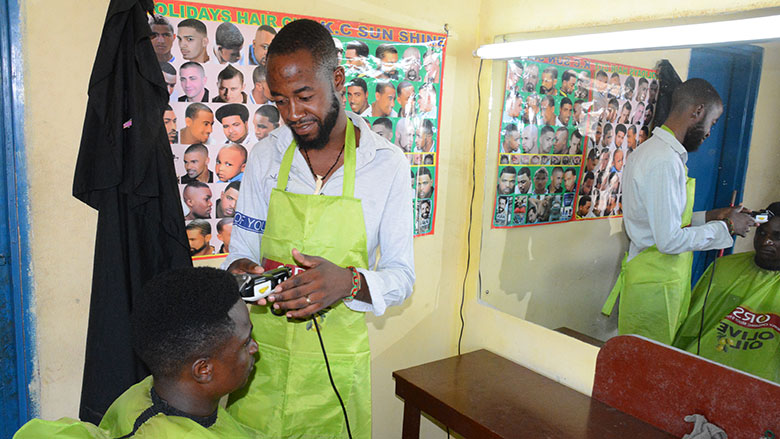 Barbershop owner Luckson Ngoma is one businessowner who will benefit from a stable supply of electricity through the Scaling Solar program.

LUSAKA, May 14, 2019 – During the peak of load-shedding in 2017, Edah Muleya, a salon owner in Lusaka’s Kalingalinga area, saw a significant reduction in profits, hurting both her business and her family.

But Muleya no longer has to worry. Last month, President Edgar Chagwa Lungu inaugurated the Bangweulu Scaling Solar Plant in Lusaka’s Multi-Facility Economic Zone. The 54-milliwatt (MW) plant is expected to supply as many as 30,000 households and several businesses with electricity. This is particularly important in Zambia, where one-fifth of the population has access to electricity and drought has taxed hydropower facilities.

“I am excited to hear that President Lungu has launched the Bangweulu Solar plant, because it means load shedding will reduce,” said Muleya. “With stable supply of electricity, I am able to make a profit of about K3500 ($350).”

Constructed with support from the World Bank Group through the International Finance Corporation (IFC), Zambia is the first country in Sub-Saharan Africa to implement the Scaling Solar program. The program brings together Bank Group services and instruments under a single engagement aimed at creating viable markets for grid-connected solar energy.

“This program represents what coordinated efforts can achieve,” President Lungu said during the event. “The collaboration and commitment shown by the key government institutions involved in this effort should be a model of how we facilitate private sector growth in Zambia.”

Small business owners such as Canan Mutunta, a welder, and Luckson Ngoma, a barbershop owner, also hope to benefit from the stable supply of electricity.

“When there is no load shedding in a week, I am able to make a complete metal gate which I sale for K1500 (US$150),” Mutunta said. “I am happy that government is working toward reducing loading shedding through use of solar energy.”

Scaling Solar is an open and competitive approach that facilitates the rapid development of privately-owned, utility-scale solar PV projects in Sub-Saharan Africa. It enables governments and utilities to procure solar power transparently and at the lowest possible cost. Through competitive auctions organized by the program, Zambia was able to attract world class developers to its first two projects and obtain some of the lowest tariffs in Africa at that time; $.06 cents and $.078 cents per kilowatt hour fixed for 25 years.

In recent years, droughts in southern Africa have significantly reduced the electrical output of Zambia’s hydropower plants, leaving many Zambians in the dark. Power shortages and forced rationing have impacted the national economy and pushed the government to mandate the procurement of 600 megawatts (MW) of solar photovoltaic (PV) power and to target an overall increase in electricity generation to 6,000 MW by 2030.

With its year-round sunshine and geographical location, Zambia is well positioned to integrate solar power into its energy mix dominated by climate-vulnerable hydropower.

“The Scaling Solar Project will make Zambia save significant amounts of money in the long run,” said Ina Ruthenberg, World Bank Country Manager for Zambia. “For a 54-megawatt project over a 25-year concession period, it equates to a saving of almost $140 million.”

Scaling Solar is also quick. Zambia has been able to assess projects and manage competitive tenders in short order. The first plants are now being built with commissioning set to occur within a fraction of the time it would have taken Zambia to do so independently.

The first projects at Bangweulu, sponsored by French company NEOEN, is now commissioned with IFC financing and letters of credit backed by International Development Association (IDA) partial risk guarantees. Zambia has entered a second round with Scaling Solar to develop additional solar plants, which also envision IDA18 payment and loan guarantees to back-stop the plants coupled with IFC financing.

Zambia’s Minister of Energy, Mathew Nkhuwa, said the projects will not only curb power shortages and provide a source of energy that complements Zambia’s hydro-based system, they “will allow the government of Zambia to reduce its electricity purchase from expensive diesel power plants.”

Based on initial assumptions, Zambia’s savings over the first 25 years would be about $163 million per 50 MW power plant. The first two plants will increase the country’s available generating capacity by 5% and will help restore water levels in its hydropower dams.