Our Mission Is More Urgent Than Ever 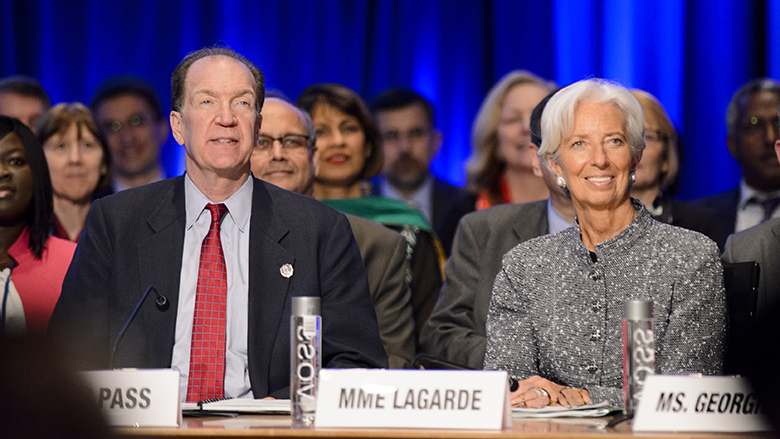 The global outlook foresees a moderate slowdown in economic activity, with lingering downside risks. Global trade growth has weakened, while investment prospects have softened; both of these remain important engines of growth, productivity, innovation, job creation and sustainable development. Debt vulnerabilities persist, and policy uncertainty is weighing on confidence.  For developing countries, it is important to adopt growth-enhancing policies while containing risks and protecting the most vulnerable. The World Bank Group, in partnership with the International Monetary Fund, is able to help countries in addressing these concerns.

The committee, which represents 189 member countries, underscored its support for the Bank Group’s twin goals of ending extreme poverty and boosting shared prosperity, as well as the overarching strategy guiding its work through 2030.  The committee noted the Bank Group’s progress on a set of policy reforms tied to the capital increase it approved a year ago for IBRD and IFC, which aim to deliver development results more effectively while making the institutions more financially sustainable and efficient.

The meetings marked the arrival of incoming World Bank Group President David R. Malpass, who previously served as U.S. Under Secretary of the Treasury for International Affairs. In welcoming him and noting his strong commitment to the Bank Group’s mission and strategy, the committee also expressed appreciation for the leadership of former Bank Group President Jim Yong Kim and of Interim President Kristalina Georgieva.

In its communiqué, the committee highlighted its support for the Bank Group’s work through the International Development Association (IDA), its fund for the poorest countries, including the Private Sector Window that allows the International Finance Corporation (IFC) and the Multilateral Investment Guarantee Agency (MIGA) to increase their investments in IDA countries and fragile situations. The committee noted the strong start of the Bank Group’s Human Capital Project, with nearly 60 countries now participating. It also welcomed efforts to help developing countries expand access and make effective use of disruptive technologies to create opportunities for the poor. The committee reiterated the importance of delivering on the Bank Group’s Climate Change Action Plan and expressed its support for a strategic approach to help countries cope with issues of fragility, conflict, and violence.

In taking office the week of the meetings, Malpass also expressed his support for the recent capital increase and for the Debt Transparency Initiative, which the Bank Group and the IMF have adopted to increase public disclosure of debt and reduce the frequency and severity of debt crises. At the meetings’ opening press conference, Malpass touched on key challenges, including the growing concentration of global poverty in Africa and the need for continued international cooperation on range of global issues.  On joining the Bank Group, he said, “I am enthusiastic about the job that I've undertaken.  I'm deeply honored to be here and to tackle these challenges.”

In a statement after the Development Committee meeting, Malpass stressed that “Our mission is more urgent that ever.” He noted that with over 700 million people still living in extreme poverty, income growth is insufficent to ensure shared prosperity. He said, “It is critically important that we work tirelessly to foster broad-based growth, raise median incomes, create jobs, and fully incorporate women and young people in economies, to support a stronger, more stable global economy for everyone.”

Malpass expressed optimism about the work ahead: “The World Bank Group is well-positioned to help in these efforts. We have the right tools and resources, talented and professional staff, and a clear and urgent mission.”