Belt and Road Initiative in Central Asia and the Caucasus 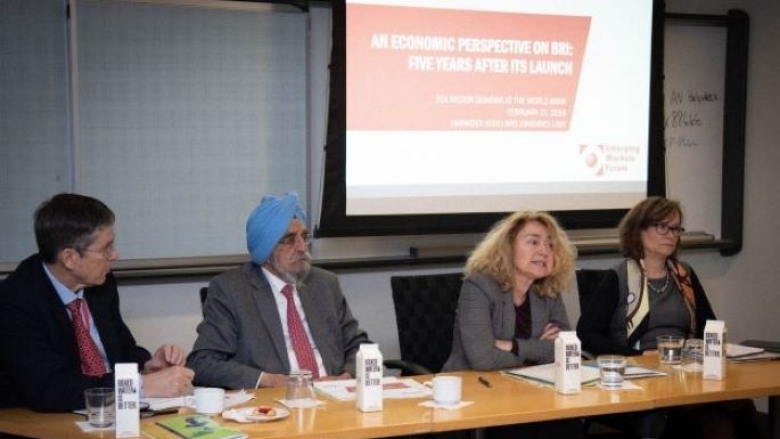 The massive Belt and Road Initiative (BRI) plans to build roads, railways, seaports and other trade infrastructure in dozens of countries in the Eurasian continent. The BRI aims to connect Asia to Europe, and the initiative has steadily expanded economic corridors and projects as far as Africa.

Two of the planned corridors of this ambitious project will run through countries in the Central Asia and South Caucasus. These countries are mostly land-locked, and their transportation infrastructures and quality tend to be low.

“However, there are also significant risks involved, and the initiative can leave countries with excessive debt and poor quality projects; and there are potential environmental and social costs,” Demirguc-Kunt said. “So the question is how can these countries maximize the benefits and minimize the risks?”

Economists Harinder Kohli of the Emerging Markets Forum and Johannes Linn of the Brookings Institution spoke about the BRI at the inaugural ECA Talks event, a series of monthly talks in which researchers exchange and challenge ideas about key issues affecting the region.  Their talk was based on a study that draws on background notes prepared by experts from the region on their countries’ perspectives on the BRI, hence providing an “inside-out” perspective.

One of the constraints to good analytical work in this area is that no comprehensive dataset exists with reliable information about BRI project costs, conditions and terms of financing.

“There are great benefits to be had but also considerable risks that need to be addressed in one way or another,” said Linn. BRI investments should reflect country priorities and be integrated with national and regional plans.  Macroeconomic constraints, especially debt sustainability, must be carefully monitored and respected.

"What we need is to have more data and more information. This is the only way we are going to understand where the benefits come from."
Caroline Freund
World Bank Director of Trade, Regional Integration and Investment Climate

Governance and corruption issues are important as in any large infrastructure project, so there is a need for greater transparency on terms and conditions of these projects, for example open and transparent public procurement.  Some BRI routes pass through ecologically important landscapes lacking adequate protections, posing a wide range of environmental and social risks, which need to be addressed.

Reaping the benefits will also depend on soft investments made to support trade. Such soft investments include ensuring the efficient operation and maintenance of projects after they are built and improving trade logistics at border crossings. Kazakhstan, for example, stands to receive a potential $5 billion annually in transit fees from goods moving through it to other markets.

BRI projects also include investments in energy, mining, agriculture, communications, and technology to improve trade connectivity. But not everyone will benefit from BRI projects, which will usher in more global trading competition and labor mobility. Countries will need to consider ways to compensate businesses and workers that are eventually forced out.

“What we need is to have more data and more information,” said Caroline Freund, World Bank director of trade, regional integration and investment climate. “This is the only way we are going to understand where the benefits come from.”