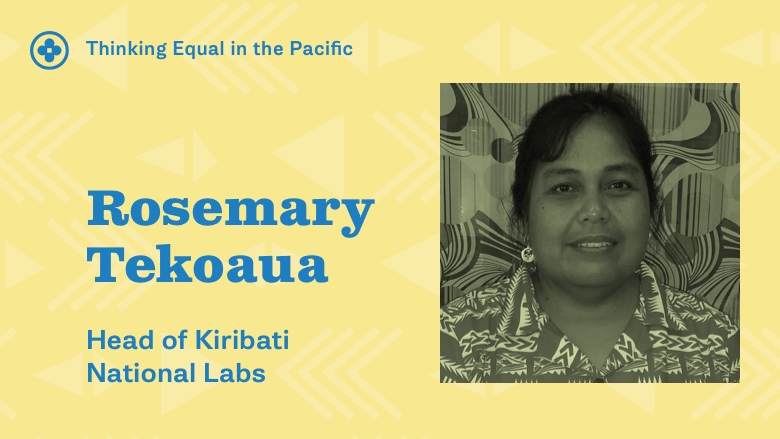 For International Women’s Day 2019, get to know some of the women driving change and increasing equality across the Pacific Islands and Papua New Guinea. Rosemary Tekoaua is the Chief of Laboratory Services in Kiribati, based in the capital, Tarawa. In her role, Rosemary looks after all three hospital labs across Kiribati, and oversees the work of nearly 30 technicians and medical scientists.

I started in the lab and have worked my way up to the Head of Laboratory Services. I have been in this role for more than five years. Before this, I was the Deputy Chief of Laboratories, and I was in a medical role before that.

I’m also the Chair of the Hepatitis B Taskforce. There is a high prevalence of Hepatitis B in Kiribati and we have many deaths from it. We are fortunate to have a treatment program that started in March last year, which has helped lots of people with the disease. The Hepatitis B Free project is also getting medicine and providing treatment for the first four years, with DFAT [Australian Government] support.

Mostly within the labs we do rapid tests for blood-borne diseases and along with bio-chemistry and hematology work, we assist in the treatment and testing of cancer and deal with microbiology to identify micro-organisms causing disease.

Caring for others, especially the sick and vulnerable, is what drives me to help in any way I can, especially in terms of medical science.

When I started university I was training to be a teacher. But along the way I started to want to work for the hospital and became interested in laboratory science, so I managed to get a scholarship to study in Melbourne for my undergraduate and post-graduate. Now I can work for the people of Kiribati in health services.

I think I was interested in this because I wanted to know what causes a patient to get sick, and what could be done to cure them along the way. I’ve always been very keen on that.

Now there are a lot of women wanting to take up professions in medical science, so it is more balanced, but I would say that they need to be prepared and whatever they want to pursue they need to bear in mind that if there is a problem there will always be a solution to it.

What are the biggest issues in Kiribati right now, and how can they be addressed?

One of the main issues is gender-based violence in the country. A few years ago it was recognized in a study as a major issue, it is often a taboo issue that is not openly discussed but this study actually informed decision-makers to act on it.

There has been a lot of work done in this area by law and policies, but work on awareness for our government officials, especially new ones, needs to continue as they need to be informed. [Government officials] often have other priorities, but with extra awareness our officials can provide a positive impact to our country in this area and most importantly, [they can] strengthen our laws, policies and guidelines around this issue at the national level.

One of the main problems of gender-based violence is the lasting effect of the trauma. We have had women die from physical abuse, but another long term effect is the ongoing trauma and the emotional effect is huge on women.  This is a big issue, but things have been done and I’m grateful the government has done something.

The second issue I see working in the hospital is teenage pregnancy. It is a big issue in our country. This should be a national issue as women with babies can’t achieve what they want if they are pregnant at a very young age.

Where do you see Kiribati in 25 years?

For me, I think more women will be free from violence and they won’t be traumatized from all these issues. And giving to a program that gives ongoing awareness and advocacy on teenage pregnancy will make the girls ready and prepared to be responsible for their actions.

What change would you like to see that could bring greater equality for women in Kiribati?

I would like to see more people embracing the importance of women’s roles and recognizing their capabilities in the country. Women support the country and economic growth. Respecting these roles will bring greater equality and respect for the women of Kiribati.

If you could use one word to describe women in the Pacific what would it be?

Kind hearted. Maybe they are too kind hearted. I think they are so kind that sometimes, as we have learnt about gender based violence, we see women sometimes feel they cannot over-rule their husband; so it is a conflict between culture and regulation and laws around this.

I think in rural areas where the cultural system is strong, it is harder to change this straightaway, but at the national level, the law should be promoted across these more culturally-influenced islands. We have 33 islands and it is hard to enforce the law. So this is a challenge, but with a new generation and ongoing awareness I’m looking forward to seeing changes and how this affects those leading Kiribati in the future.