Investing in Our Knowledge Base: The World’s First International Research Conference on Carbon Pricing

Last week in New Delhi, India, the Carbon Pricing Leadership Coalition (CPLC), which is convened by the World Bank Group, organized the CPLC Research Conference—the world’s first international research conference on carbon pricing. Hosted in collaboration with The Energy and Resources Institute, the two-day event brought together over 30 researchers and 150 participants from a range of sectors, with special emphasis on drawing in young, emerging scholars and researchers from developing countries. Participating researchers were selected by an International Scientific Committee, chaired by Andrei Marcu, Senior Fellow at the International Center for Trade and Sustainable Development, and Michael Mehling, Deputy Director of the Center for Energy and Environmental Policy Research at the Massachusetts Institute of Technology. Proceedings focused on six themes spread over the two days: (1) Learning from Experience, (2) Carbon Pricing Design, (3) Concepts and Methods, (4) Political Economy, (5) Decarbonizing the Economy, and (6) Emerging Frontiers. The conference was designed to take stock of the existing carbon pricing research base—both theoretical and practical—to better inform future decisions made by business leaders and policymakers using carbon pricing. To do this, 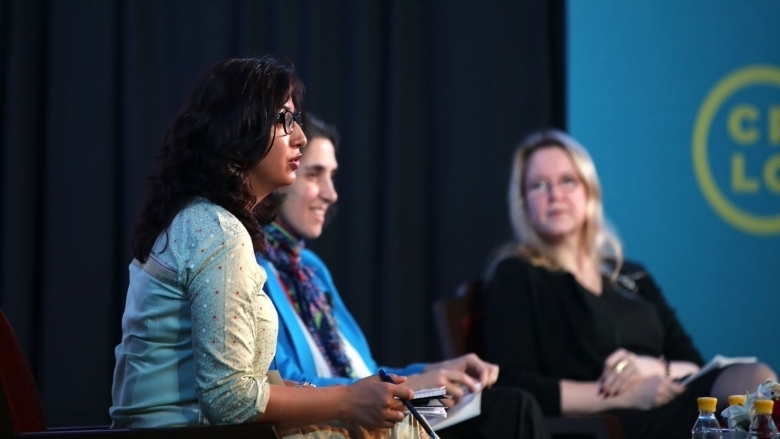 Neha Mukhi from the World Bank leads a panel on carbon pricing and air quality.

Day 1: John Roome, World Bank Senior Director for Climate Change, opened the conference by addressing the audience as the world’s “carbon pricing brain trust”. He was followed by Gérard Mestrallet, co-chair of the CPLC High-Level Assembly and the former CEO of Engie, and Lord Nicholas Stern, co-chair of the High-Level Commission on Carbon Prices and IG Patel Professor of Economics and Government at the London School of Economics. Presentations then covered a range of topics on the first three themes, with highlights including “Creating a Climate for Change? Carbon Pricing and Long-Term Policy Reform in México” by Arjuna Dibley, “Proposal for a Carbon Fee and Dividend Policy in the State of New Jersey” from Jivahn Moradian, “The Environmental Effectiveness of Carbon Taxes: A Comparative Case Study of the Nordic Experience” from Sachintha Fernando, as well as “Pricing Carbon to Contain Violence” from Shiran Victoria Shen. Andrei Marcu closed the first day with in-depth conversation on the status of Article 6 of the Paris Agreement with practitioners and experts involved in the negotiations. Overall, the day provided a comprehensive overview of the history and performance of carbon pricing measures around the world.

Day 2: Michael Mehling kicked off the second day chairing an opening plenary on carbon pricing in practice with representatives from Sweden, Mexico, Canada, the World Resources Institute and the World Bank. Presentations covered the larger social-political-economic context of carbon pricing, from “Carbon Pricing Design Options to Address Co-Pollutant Hotspots ” presented by Rachel Cleetus, to air quality and the practical implications of carbon pricing design in relation to common concerns such as equity, policy interaction, and competitiveness. For example, Daniela Gutiérrez Torres presented on the “Interaction between the Carbon Tax and Renewable Energy Support Schemes in Colombia: Complementary or Overlapping?”

Not only was increased investment in the knowledge base highlighted as key to filling research gaps but further collaboration between the research and practitioner communities was also strongly noted. In a similar vein, also strongly emphasized was the value of different and diverse perspectives—from and within academia, government, business, civil society, etc.— to come together to better understand the effectiveness of carbon pricing policies and how they can be used to meet the goals of the Paris Agreement and deliver additional social and economic benefits.

The conference closed with a call for increased content development, including more country-specific research, as well as upcoming opportunities to push the carbon pricing message—such as Innovate4Climate in June in Singapore. Moving forward, the CPLC and World Bank Group reiterated their commitment to supporting knowledge creation and providing platforms for greater collaboration.  This unique convening facilitated the possibility of further collaboration between these groups, which could lead to better informed and potentially more socially-optimal carbon pricing proposals.