The Acid Attack Survivor Who Fought to Change the Law 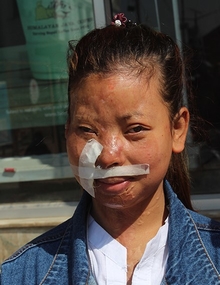 Three years ago, 16-year-old Sangita Magar had arrived for a preparation class for her School Leaving Certificate (SLC) examination in Kathmandu. She was waiting for her teacher when she felt a liquid thrown at her face and hands. She felt a sharp, terrible pain. It all happened in a few seconds.

When she reached home, her mother immediately took her to Bir Hospital. “I was too numb to realise what was happening and later fainted,” Sangita recalls. She was then transferred to Kathmandu Medical College, where she spent six months recovering from severe burns to her face.

Her friend Seema, who was also injured during the attack, wrote a letter to the Prime Minister requesting him to make a provision to allow both of them to sit for SLC examination at the hospital. The Prime Minister agreed, and the girls sat for the examination, which took place 25 days after the attack.

Sangita was successful in passing her SLC, however, it took her three years to leave her house again. The attack caused her to lose her confidence, and she still fears that her attacker will try to hurt her again. “Living with constant fear is torturous,” Sangita shares.

The acid attack garnered a lot of media attention, and the police were under tremendous pressure to find the perpetrator. Her attacker, Jivan BK, was a tenant in the same building where she lived. BK claimed that he was a jilted lover rejected by Sangita, and that her family’s scorn towards his caste made him take this drastic step. However, Sangita says that his narrative was not the truth, and that they hardly interacted. “I was rarely at home as I used to take tuition classes before and after school time,” she says. Sangita is angry that media romanticized the story and that they never tried to verify it.

However, she felt that media attention might have helped her when later challenging Nepal’s laws on acid violence. Sangita also explains that most acid attacks are reported as an act of revenge when men feel ignored by women of their interest. “It is good that at least these cases are now being reported,” she says. “A majority of such cases go unreported.”

Fighting for a change to laws

Previously under Nepali law, the Government didn't provide financial support for treatment to acid attack survivors, nor was any compensation provided. Sangita said that it was very difficult to cover the costs, with a surgery alone costing US$300-$400, and medicines being very expensive.

In June 2017, Sangita and her friend Seema became the two plaintiffs in a public interest case that challenged Nepal's laws on acid and burn violence. As a result, the Supreme Court ordered that victims should get immediate financial support from the Government to cover treatment. The Court also increased the penalty for committing acid attacks from three years to ten years imprisonment. These changes came into effect on August 17, 2018 as part of a new civil and criminal code. After the verdict, Sangita has been receiving discounts on medical treatments, and hospitals now provide free treatments to acid survivors immediately after attacks.

Sangita is now fighting to stop the sale of acid which is freely available in the market, and is pushing for life punishment for the perpetrators. She is also advocating for stronger policies to support acid attack survivors, including the provision of compensation for survivors.

Sangita has appeared in public programs to create awareness about acid attacks, and she along with her friend Seema are also planning to open an NGO to support acid attack survivors. “Both me and my family went through such a difficult phase after this incident,” Sangita shares, “So I want to do something for the survivors like me. I believe I should dedicate my life to supporting acid attack survivors.”