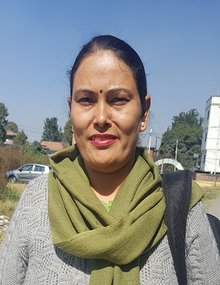 Kalpana Karki believes that her leadership qualities were evident very early in life. Born into a poor family in the remote village of Tumparkot in Sindulapchowk, she had to take care of her four younger siblings while their parents worked in the field. However, Kalpana was dedicated to her studies, obtaining top marks in her classes, while excelling in extracurricular activities.

Kalpana recalls an incident when she was in Grade Six. During the boom of the carpet trade in Nepal, a large number of people from her village were going to Kathmandu to work in carpet factories. Kalpana’s father wanted to send her to Kathmandu, too. However, Kalpana’s mother fought with her father and refused to send her away. “My mother knew the value of education and insisted that I study harder to make a life for myself,” Kalpana recalls gratefully.

Gaining a greater understanding of the struggles in local communities

In 2005 Kalpana received an opportunity to work with Community Self-Reliance Center (CSRC), a non-government organization campaigning for land rights and reform, working in a Dalit community in the Banke district of Mid-Western Nepal where she obtained a deeper awareness of the extent of poverty in Nepal.

Two years after she started working with CSRC, Kalpana supported a land rights movement to help provide rights to tenants who had been deprived of their rights, despite being major contributors to the agricultural production and management of the lands on which they were working. After series of movements, CSRC were successful in registering tenants and granting them rights to half of the land.

During this time, Kalpana learnt that women were also being deprived of their rights, given the lack of land certificates in their name. “Holding land is a form of wealth, and until women have land certificates in their name, they will not be empowered financially,” Kalpana says, referring to the 2011 Census which reported that land is the primary source of livelihood for many rural households, with 66% of the population reporting that working in agriculture was their main occupation.

To raise awareness of women’s land rights, Kalpana participated in a women’s march over 11 days which took place across Banke, Bardia, Dang and Mahendranagar. The objective of the march was to hand to the Constituent Assembly’s Deputy Speaker, Purna Kumari Subedi, a memorandum to help give women rights over their lands. After a series of land rights movements for women’s ownership on land, the Government of Nepal introduced for the first time that only NRs. 100 (USD=NPR 113) would need to be paid to obtain a land registration certificate in cases of joint entitlement. This also contributed to government’s decision of providing 25 %-35%  tax exemption when registering land in women’s name in 2008.

Kalpana has since supported 12,000 poor families from five districts in the Mid-Western region to receive dual ownership land registration certificates. “Since the Government decreased the fees, the number of dual ownership on land registration certificates increased,” Kalpana says. “We realized that that this piece of paper, giving women recognition of their rights, made a huge difference in their lives.”

She says resolutely, “There are several challenges but we are not giving up. If the Government is serious about reducing poverty, then their interventions should empower women. We have seen plenty of examples of how an empowered woman contributes to uplifting her family and hopefully, eventually, society.”

"We have seen plenty of examples of how an empowered woman contributes to uplifting her family and hopefully, eventually, society."
Kalpana Karki
Land Rights Activist
Api