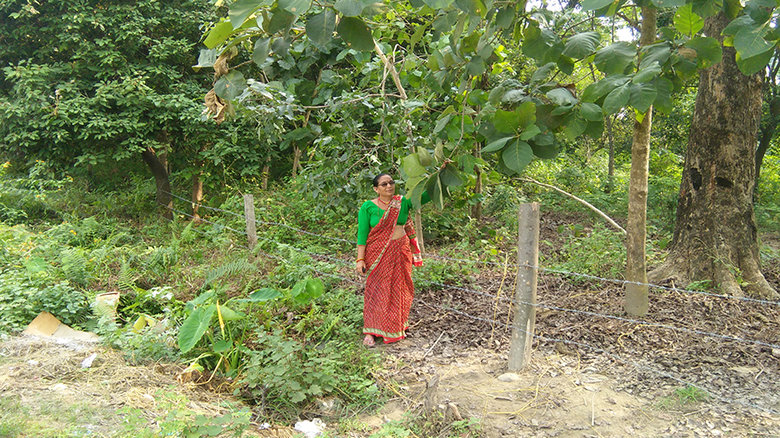 Renowned community conservationist, Nanda Devi Kunwar, was married at the age of 13 in the remote district Achham in Far-Western Nepal. Now 46, Nanda has endured a life full of challenges and hardships. She and her husband struggled to raise and feed their family of six, including their youngest daughter who was born with paralysis. In 1995, they moved to Kailali district in search of employment, but continued to struggle to raise their large family. Three years later, her husband left for India for employment and has been working there since, sending back to Nanda part of his monthly income.

After her husband went to India, Nanda Devi and her family started living in a small hut near the Madhumalati Community Forest in Kailali, where she became an active member of the community forest’s management committee. “This forest brought hope in our lives,” Nanda Devi recalls. “My family was so dependent on it, as I used to get fodder and timber from the forest.” She was so committed to the community forest that she was later elected the President of its committee. She recalls, “Since my childhood, I have always enjoyed playing and spending time grazing my cattle in the forest.”

She and other households relied on the 17-hectare community forest for fodder, wood and seasonal fruits, and for income. After she became the President of the forest’s management committee, she led tree plantations that made the forests denser, and home to various new species of birds and animals. However, when she realized that Madhumalati Community Forest was not protected and that wild animals were able to roam around the nearby villages, she made the decision of protecting it with iron fencing, a move which she said “rattled timber smugglers and land encroachers.”

Nanda Devi recounts one early morning when she was attacked by forest encroachers, who attacked her with a sharp weapon. As she tried to protect herself, both her hands were badly injured and she lost consciousness. Her neighbors came to her rescue after hearing her cries for help, and she was brought to Kathmandu. Both her injured hands were operated upon. The medical team were unable to save her right hand, and Nanda Devi now has to rely on her left hand, but her thumb on her left hand is paralyzed too. “The incident shook me very badly,” she shares “More than me, it was my children who got scared and asked me to resign, so I resigned. I still live in constant fear that the attackers might return to seek revenge on me.”

Government recognition of her efforts

In recognition of her contribution to forestry conservation, the Government named a newly found rare species of orchid after her, upon the recommendation of botanists who discovered the orchid. The orchid is called  ‘Odanchilas Nandeyi’. Nanda Devi says, “It is a huge honor to be associated with this rare species of orchid.” The community forest has also has been named Madhumalati Nandadevi Community Forest.

Despite the incident, Nanda Devi says, “The community’s trust for me is so immense that I have not been able to stay away from Madhumalati Nandadevi Community Forest. I will continue to love this forest.”

"The community’s trust for me is so immense that I have not been able to stay away from Madhumalati Nandadevi Community Forest. I will continue to love this forest"
Nanda Devi Kunwar
Conservationist
Api