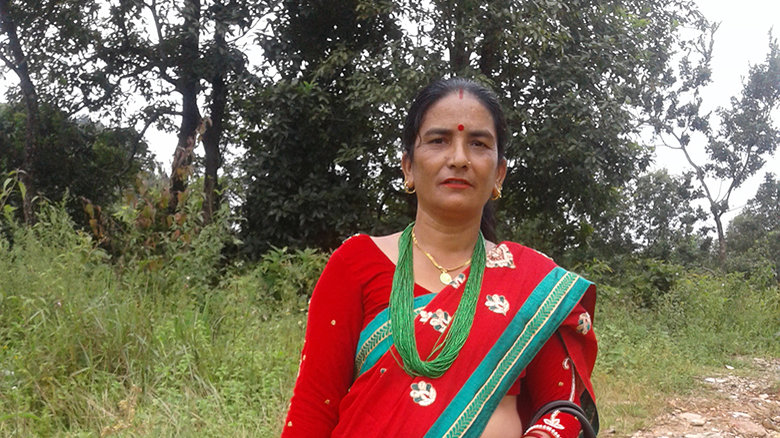 Fifty-five year-old Sannani Pariyar initially became interested in politics during her school days. While her family was very poor, her parents knew the value of education and enrolled her in school. She was able to complete grade seven, the highest level her school offered. As her parents couldn’t afford to send her to school at the district headquarters her education temporarily stopped. She was able to commence Grade Eight only after three years when her village school was upgraded to higher levels.

However, when she was in grade nine, her family started to force her to get married. “I did not want to get married but I had no choice because I didn’t have an excuse for not getting married,” Sannani says, “All my friends had already gotten married and it was very difficult to get a good marriage proposal.” She finally succumbed to family pressure and got married and within a year, gave birth to her son. “I was preparing for my School Leaving Certificate (SLC) exam. But I had to give birth to my son just before, which forced me to quit the examination,” Sannani reveals.

She dedicated her time and energy into raising her son and later a daughter, but as her and her husband’s financial situation wasn’t good, she began to help her husband in his tailoring shop. Sannani reflects, “sometimes, I feel that these struggles teach you more and make you more determined as a person.”

That determination and courage led her to become involved actively in politics after her children were old enough to go to school. Sannani joined the All Nepal Women’s Association, a sister organization of Communist Party of Nepal-Unified Marxist Leninist (CPN-UML) as a member. Reigniting her thirst for education, Sannani decided to continue her studies, 18 years after her schooling stopped. She went to the school along with her daughter and both of them passed SLC with good marks.

After completing SLC, Sannini became involved in various organizations including People to People group, a local level group which works to end various kinds of caste-based discrimination and violence against women. She explains, “Being involved in these groups helped me connect with the community and to work with them very closely, which helped me eventually build trust and leadership.” She however believes that women and minority groups such as Dalits are given positions in political parties only to fulfil the quotas and aren’t provided with meaningful opportunities to participate. She said that there still a long way to go to changing the attitudes and mindsets of people, adding, “There is still a vast difference in what people at the decision-making level do and say. Breaking that barrier and putting an end to the discrimination will be my ultimate win.”

She submitted a nomination for chairperson in her ward in the 2017 local elections, but her party initially tried to discourage her from filing the candidacy for the position. She recalled, “They told me it would be very expensive to win the election. But I told them that it was not their problem, and that I would manage somehow.” She contested for the election after she got a loan from a cooperative, and ultimately won.

Promoting Gender and Social Inclusion in her municipality

Sannani has also become a member of the District Coordination Committee (DCC) in her district of Dhading. As an advocate for women’s rights and preventing violence against women, she has used her role as member in the DDC to support the drafting and approval of a Gender and Social Inclusion (GESI) policy for her municipality of Jwalamukhi. This policy is the first of its kind in the municipality and will be used by all the wards within Jwalamukhi. Sannani hopes that it inspires other municipalities to draft their own GESI policy. She has also been regularly advocating for the provision of a separate gender-responsive and GESI-related budget, and has been successful in lobbying for allocating a separate budget of NRs. 500,000 (US dollar 1= Nrs. 113) for the GESI programs in her municipality.

"There is still a vast difference in what people at the decision-making level do and say. Breaking that barrier and putting an end to the discrimination will be my ultimate win."
Sannani Pariyar
Member, District Coordination Committee, Dhading
Api