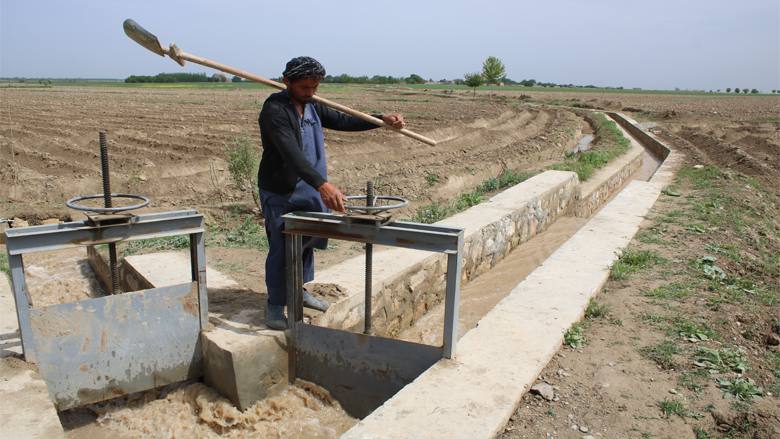 Supported by the Afghanistan Reconstruction Trust Fund (ARTF), the On-Farm Water Management Project works to improve agricultural productivity in project areas by enhancing the efficiency of water use.

Balkh District, Balkh Province – Since early morning, 22-year-old Shirdad and his elder brother have been working tirelessly on their patch of melons, one of the main crops they sell to the market. It is a cool fresh morning in Asia Qonaq village in Balkh district, and most of the residents are working on their farmland.

Shirdad is hopeful that his family’s land will yield more this year, having suffered from poor earnings in the past. He has reason to be positive since the On-Farm Water Management Project (OFWMP) rehabilitated and improved a section of the main irrigation canal in his village, the backbone of the Asia Qonaq irrigation scheme.

Until recently, bringing irrigated water to his land took two hours, which meant he had trouble irrigating even half of his 12 jeribs (2.3 hectares) of land. “I had an hour of irrigation water share and 50 percent of the water would be wasted in the canal,” explains Shirdad. Faced with water shortage, Shirdad says that his output was low and the quality poor. “The quality of the melons was poor and we sold them at a low price to the market. Now, the amount of irrigation water is good and we hope to earn more.”

Asia Qonaq is a village of 250 households, where over 80 percent of the families earn their livelihood by working in the fields and keeping livestock. The villagers are already seeing an improvement in their farming since the rehabilitation in 2017. Abdul Qayum, 50, a village resident and farmer says, “The project made positive changes and improved our irrigation water system. Now its condition is much better than in the past.”

"The project made positive changes and organized our irrigation water system. Now its condition is much better than in the past." 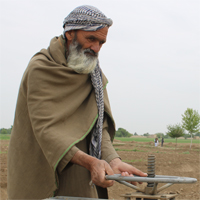 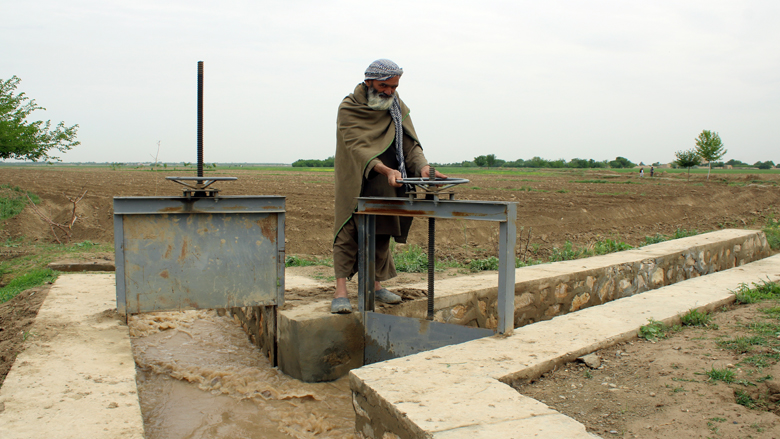 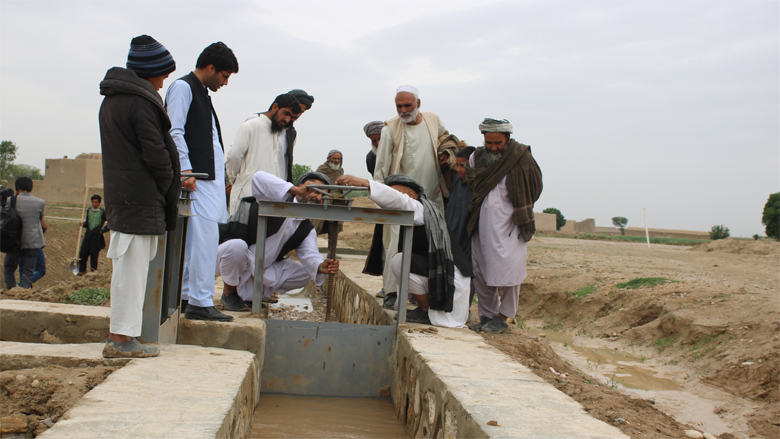 Under the On-Farm Water Management Project, farmers have been introduced to effective ways of managing irrigation water through the Irrigation Association set up in every village.

The rehabilitation and improvement of the 1,813-meter section took a year to complete at a budget of some 7.2 million afghanis (about $100,000). The entire irrigation scheme, including smaller channels, totals four kilometers and takes water from Balkh creek to irrigate 328 hectares of farmland in three villages, including Asia Qonaq. The rest of the scheme will be reconstructed during next phase of the project.

Haji Abdul Shakoor, 50, who owns 25 jeribs (5 hectares) of land in Asia Qonaq village, says the amount of irrigation water available has increased because seepage has reduced as a result of the canal rehabilitation. “We had irrigation water in the past, but the water wastage was high,” he says. “Thankfully, now [that section of] the canal does not absorb water. It is having an impact on farmers’ crops.”

OFWMP works to improve agricultural productivity in project areas by enhancing the efficiency of water use. It is implemented by the Ministry of Agriculture, Irrigation, and Livestock (MAIL) and supported by the Afghanistan Reconstruction Trust Fund (ARTF), administered by the World Bank on behalf of 34 donors. The pilot project aims to support on-farm water management investments in five regions—central, eastern, southwest, northeast, northern—covering a total of 19,000 hectares.

Masumullah Arifi, OFWMP regional manager of the northern region, confirms that rehabilitating existing irrigation canals has had direct benefits. “Based on our mid-term survey in the places where we have implemented projects, the amount of water wastage has decreased by 25 percent and farming productivity has increased 25 percent,” he says.

Since the start of implementation in 2011, . 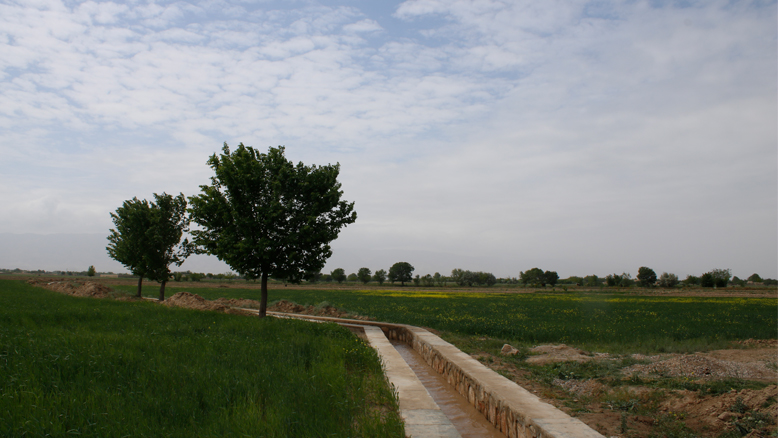 View of Asia Qonaq village in Balkh district of northern Balkh Province. The village is home of 250 households, where over 80 percent of the families earn their livelihood by working in the fields and keeping livestock. Photo Credit: Rumi Consultancy/ World Bank

, including learning to use water more efficiently to increase harvest from a small piece of land.  Shirdad thinks that farmers who are benefiting from OFWMP activities will have better earnings in the near future. “It will definitely improve their welfare and will mean lower rates of hunger with healthier families in the rural areas,” he says.

Farmers have been introduced to effective ways of managing irrigation water through the Irrigation Association (IA) set up in every village where OFWMP has carried out a project. The association is made up of farmers who have access to the irrigation scheme. They contribute 50 afghanis per jerib annually on the amount of land they own toward the maintenance of the scheme.

The elected executive board of the Irrigation Association is responsible for the operation and maintenance of the irrigation scheme. It also organizes training courses in which OFWMP engineers train farmers on new irrigation methods and show them how to level their lands to improve irrigation.

and hope OFWMP will rehabilitate the remaining sections of the scheme to reduce water wastage to zero.