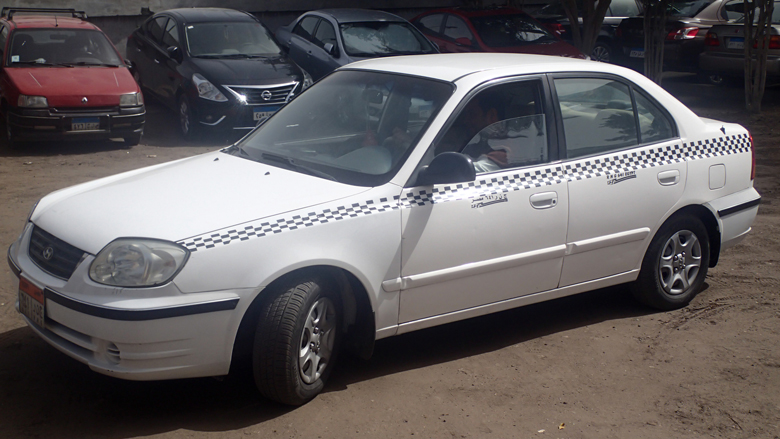 “My new taxi enabled me to work longer hours and make more money,” said Walid, a 38-year-old taxi driver from Cairo. “Thanks to my greater income, I could save the money I needed to buy a home, rather than living in a rental. This has been a lifelong dream of mine” he added.

Walid was one of 45,000 taxi drivers who turned in their vehicles for scrapping and recycling, in return for new upgraded vehicles. This vehicle exchange is a part of the ‘’Egypt Vehicle Scrapping and Recycling program’’ which was launched by the Government of Egypt to minimize air pollution through the reduction of harmful gas emissions coming from outdated- sometimes over 40 years old- taxis in Cairo.

Cairo was the source of 40% of Egypt’s Green House Gas (GHG) transport emissions. GHGs, including CO2, trap heat in the atmosphere,causing temperatures to rise and are accompanied by harmful air pollutants that result in respiratory infections, heart disease, and cancer. A significant amount of those emissions was attributed to the 45,000 taxis in the governorate’s fleet that were removed from the streets of Cairo.

In efforts to protect the environment from air pollution caused by the aging vehicle fleet, a new traffic law was adopted in 2008, mandating that fee-based transport vehicles, including taxis and microbuses, that are over 20 years of age would no longer be eligible for a new operating license or license renewal. However, the lack of a clear vehicle scrapping and disposal mechanism slowed the law’s enforcement.

To implement the law fairly and efficiently, the Government of Egypt launched a national Vehicle Scrapping and Recycling Program that enables taxi owners affected by the law to turn in their vehicles voluntarily for managed scrapping and recycling, in exchange for new vehicles. These new taxis were purchased from a number of pre-registered vehicle dealers at a discounted price and with financing facilities.

The government requested the World Bank’s support for the program through the Bank’s Carbon Partnership Facility (CPF). The facility operates in accordance with the United Nations Framework Convention on Climate Change (UNFCCC) treaty which aims to decrease global pollution by putting a cap on the amount of GHGs that developed countries are allowed to emit. Should developed countries need to exceed their assigned quota of GHG emissions, they can do so through purchasing certified emission reductions (CERs) from GHG-reducing projects in developing countries that are registered with the UNFCCC.

Alongside the national budget financing, the project received additional financing from the global network created by the CPF in order to further expand its operations. As a trustee of the CPF, the World Bank provides results-based financing, an instrument that links financing to pre-determined results. This supports the Egypt Vehicle Scrapping and Recycling Program by purchasing the certified emission reductions (CERs) that result from the replacement of older taxis. According to the UNFCCC treaty, the CPF purchases the CERs on behalf of governments that contribute funds. The transferred CERs help offset the GHG emissions of the developed countries participating in the CPF. Funds attained from selling these carbon credits are used by Egypt’s Ministry of Finance to expand the program and increase its capacity to scrap old vehicles and provide new ones.

The World Bank is also trustee of the Danish Carbon Fund and the Spanish Carbon Fund. Both funds made an advance payment to finance the program. Profits generated from the sales of carbon credits are considered as a revenue for the fund that manages the project. In its capacity as the funds’ trustee, the World Bank in collaboration with the Ministry of Finance designed, managed and supervised the implementation of the program. The CPF will purchase the CERs issued for the period up to the end of 2018.

The new replacement vehicles use up-to-date technology that reduces pollution through lower fuel consumption, reducing running costs, which improves the livelihoods of drivers. More than half of the new vehicles run on Compressed Natural Gas, which is a type of environment-friendly fuel that generates minimal GHG emissions. A recycling facility has been outsourced to ensure that the old vehicles are taken off the road permanently and that scrapped vehicle components such as tires, oils and batteries are disposed of and recycled in an environmentally safe manner.

In addition to decreasing pollution, the upgraded vehicles have improved working conditions for taxi drivers. “The steering mechanism in my new car makes driving less exhausting, I am now able to drive comfortably for long periods of time”, said Walid. “The air conditioner is also great, as it helps me maintain my usual working hours in hot summer weather and makes rides more pleasant for passengers.’’

In January 2018, the program team hosted a study tour for high level officials responsible for the transport sector in the West African countries of Burkina Faso, Cote d’Ivoire, and Togo. The delegation requested the study tour to benefit from the ‘’Egypt Vehicle Scrapping and Recycling Program’’ experience. Currently, the visiting countries are implementing World Bank-funded programs for the modernization of their transport sector including development of self-sustaining fleet renewal schemes. During the visit, the delegation met with the key program stakeholders in the Ministries Finance, Interior, and Environment as well as the operators of the one-stop shop and the scrapping site. The delegation also went on a half day site visit to the vehicle scrapping facility, to witness the scrapping process first hand.

After the project’s success in Cairo, the Government of Egypt is now considering replicating the same model in other governorates.