Bellona, October, 2018 – It has been nearly two months since a ship has come to the island of Bellona in Solomon Islands’ south. Today, the wait is over and there are over 100 people on the beach watching the incoming ship and waiting for its arrival. Excitement is high; nearly everyone on the island has turned up – many will be getting crucial supplies, some will be seeing loved ones after a long wait, and the others are just there to watch the spectacle.

A woman on the beach shifts anxiously from foot to foot as the first small boat ferrying the supplies from the ship scrapes onto the sand. A younger woman gets off, and the two embrace, touching their foreheads together in a traditional Polynesian greeting of love and respect. It has obviously been a long wait.

Even by Solomon Islands’ standards, Bellona is particularly isolated. It is a two-day boat trip or a twice-weekly flight from the capital, Honiara.

Getting even the most basic of services delivered here is a significant challenge. This is no different for law and order. There are no police on the island; getting justice for a crime, or dealing with disputes can often take years, or in some cases, the disputes are never addressed.

This lack of conflict resolution has serious impacts: a land dispute can lead to work on a road, a school or a clinic stalling; it can do terrible damage to the close-knit communities who may not be able to resolve issues between citizens. Serious criminal cases such as robbery or gender-based violence may not be referred to the police, as many see the police, and more generally, the state, as largely removed from daily life.

If not managed carefully, these issues can lead to more instability, undermining efforts that have gone into stabilizing this post-conflict developing country. The Solomon Islands government recognized this challenge and, with support from the World Bank and the Australian government, it began investigating ways to address this problem at its heart: in the community.

Since 2014, the Community Governance and Grievance Management Program  has been building support to address a challenge that goes well beyond Bellona and the Solomons’ nearly 1,000 islands, with potential implications for remote island communities across the Pacific.

"Our research found two main things. One: there were a huge amount of social order issues going on following the civil conflict, and traditional solutions, along with the police, simply weren’t coping. And two: people were feeling very little connection to the state because there was little government presence."
Ali Tuhanuku
Program Field Researcher 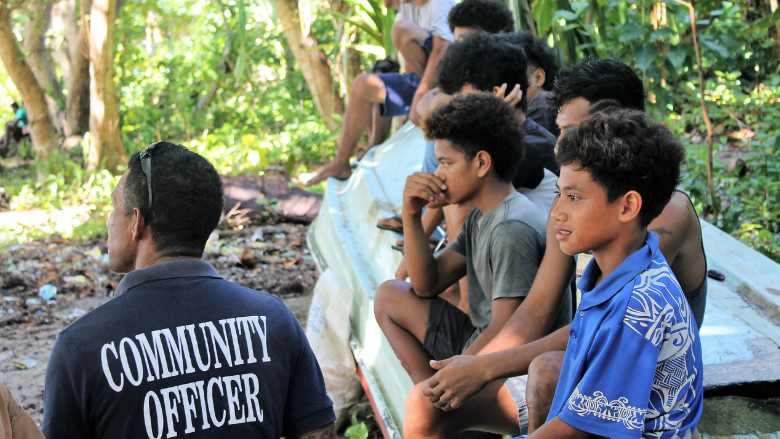 A community based approach

Building on this research, the Community Governance program sought to relieve the first challenge by creating a ‘first line of contact’ for people with law and order in the form of Community Officers. These officers are elected by the community to direct serious issues to relevant authorities or help to solve smaller cases within the community itself. This in turn is strengthening links between the government and the community.

Walter Baiabe is the Community Officer in the area that includes the beach where people were waiting for supplies. His role is to mediate and solve issues when they arise and work with community leaders and elders where possible to reach solutions.

“The biggest challenge people have here is a lack of income, unemployment and no organized activities for youth,” Walter said. “When they are drunk these frustrations come out.”

Community Officers are also often the only link to the government within a village providing community members with information about what the government is planning at the local and provincial level which communities previously had no access to.

Strengthening villages will strengthen the state

Building these connections to the state is vital as the Solomon Islands slowly recovers from the period of ethnic civil conflict, known locally as ‘the Tensions’.

“State institutions were collapsing by the end of the Tensions,” says Ali Tuhanuku. “Schools couldn’t function, clinics had no money and had to close; it was a disaster.”

Following the 15-nation intervention force known as the Regional Assistance Mission to Solomon Islands (RAMSI), law and order was restored and institutions rebuilt. Yet the memory of serious dysfunction within the state is fresh, and an element that drove the Tensions – people’s sense of disconnect from the state – is still very much a concern.

“What the program looks to do is move from the state government level to the local community-level, looking at how governance works at the village level and seeking to improve it. After all, Solomon Islands is a country of villages – 80% of the people live in rural and remote communities – so a broken system for villages means a broken system for the government,” said Ali.

Through the support of the Australian Government, the program is now expanding from the provinces of Renell Bellona and Makira-Ulawa to Malaita and Central Province. The project is supported by the World Bank and financed by a US$3.08 million grant from the government of Australia.