Nazeema is one of 21,000 beneficiaries in eastern Nangarhar Province, who received a loan to start her small business. She received loan from her Village Savings and Loan Association, an initiative established by Afghanistan Rural Enterprise Development Program. The program aims to increase employment and income of rural communities in five of the 34 provinces in Afghanistan.

KHAIWA DISTRICT, Nangarhar Province – It is a sunny afternoon in Barshad Khan village. A group of young and elderly men have gathered, discussing milk prices and consulting the notebooks in their hands, while their cows are out to pasture nearby.

One of the men, Ghulam Haidar, 62, is reading from his notebook in which he has recorded his earnings: “My monthly income from milk collection is about 18,000 afghanis (around $260).” It is good extra income to his main income of selling vegetables, he says. With the extra earnings, the father of 10 says his children can go to school and he can meet their needs. “I am so thankful that I make halal money for myself and my children’s future.”

Ghulam Haidar and 31 other residents of Barshad Khan village, in Khaiwa district in Nangarhar province, are profiting by doing business with a milk collection center, named “Parmakhtak” in Pashto, which was set up two years ago. Through the center, Ghulam Haidar has learned to use the milk from his cows for profit. “I have learned not to waste a single drop of milk,” he says, “I keep orderly accounts. I collect the milk and bring it to the center. They sell it to a dairy company and I get paid well.”

Barshad Khan village milk collection center is one of three centers in the province set up by a Producer Association established by the Afghanistan Rural Enterprise Development Program (AREDP). As a result of AREDP’s work, many, like Ghulam Haidar, found that the cows they had always kept for personal use could be used as a source of income.

Imam Jan, an AREDP employee in the village, points out how the program has changed the lives of residents. “There were dozens of cows in this village, but people never thought of turning them into a source of income. However, when the project came to the village, things changed. AREDP’s activities were the most beneficial experience for the residents of this village.”

AREDP is a program of the Ministry of Rural Rehabilitation and Development (MRRD), started in 2010, with an aim to increase the employment and income of rural men and women. It receives funding support from the International Development Association (IDA), the World Bank Group’s fund for the poorest countries, and the Afghanistan Reconstruction Trust Fund (ARTF), administered by the World Bank on behalf of 34 donor countries.

AREDP is currently active in five of the 34 provinces in Afghanistan: Balkh, Bamyan, Herat, Nangarhar, and Parwan. The program works to improve economic activity among the rural poor by organizing them into various types of groups, such as Savings Groups, Village Savings and Loan Associations, and Enterprise Groups (EGs). Producer Associations are formed by several EGs coming together. Since 2010, the program has been active in seven districts of Nangarhar province and has set up 1,280 EGs and 62 Producer Associations.

"I keep orderly accounts. I collect the milk and bring it to the center. They sell it to a dairy company and I get paid well."
Ghulam Haidar
farmer, Barshad Khan village, Nangarhar province 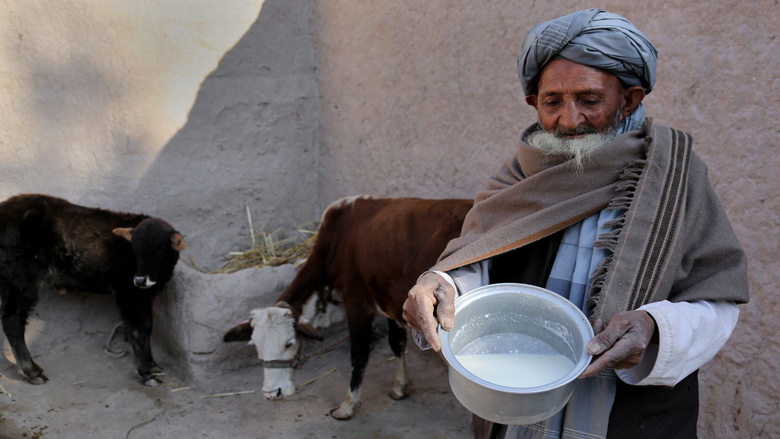 Afghanistan Rural Enterprise Development Program is currently active in five of the 34 provinces in Afghanistan: Balkh, Bamyan, Herat, Nangarhar, and Parwan. The program works to improve economic activity among the rural poor by organizing them into various types of groups, such as Savings Groups, Village Savings and Loan Associations, and Enterprise Groups (EGs).

The setting up of Producer Associations has enabled EGs to perform better and has improved earnings for their members. For example, while dairy farmers in an EG might not produce enough milk to make regular sales, several EGs could come together in a Producer Association to combine resources to establish a milk collection center to supply markets. .

The center has changed thirty-five-year-old Gul Ahmad’s life. A farmer, Gul Ahmad worked on land that was not his and did not earn very much income. “As I am working for others, I earn very little and it’s not enough to feed my family,” says the father of six. “I had the cows, but never thought I could make a business out of it.”

With the ability to supplement his income, he is thinking differently about the possibilities of a better life. “This program has helped me sell my cow’s milk and create my own small business,” Gul Ahmad says. “”

AREDP support not only helped the Producer Association establish the center, but also provided technical training on bookkeeping and livestock husbandry. The training taught the farmers to reduce disease and increase milk production in their livestock by maintaining a suitable environment and ensuring proper nutrition for their cows.

“We now know the value of our cows,” says Haji Jan Mohammad, 68. “.” The father of seven says that he has learned not to waste any milk. “I used to waste a lot of milk, but now I understand better and I keep a record of every single liter.”