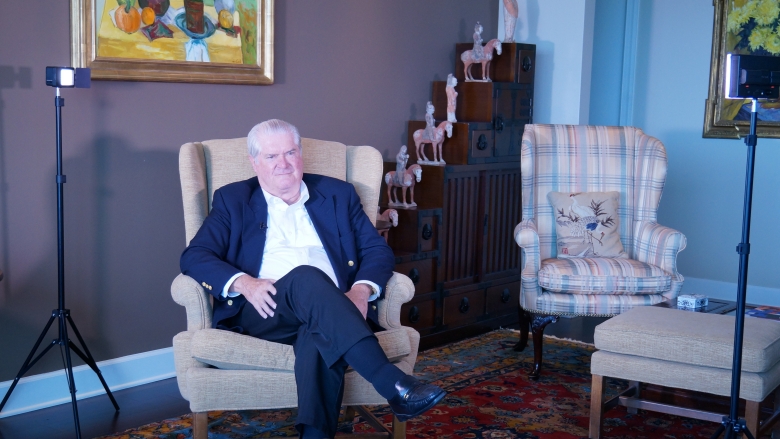 If you asked Don Roth at Princeton graduation who was the least likely person in his class to live outside the United States, he would have voted for himself. The 6-foot-2, 180-pound future World Bank Treasurer played football, lacrosse and basketball. A trip to the 1965 NCAA Final Four basketball tournament was as far as he cared to travel. But after his interest in finance was sparked at the University of Chicago School of Economics, Roth ended up moving continents seven times, traveled the world with Merrill Lynch and eventually made a stop at the World Bank Treasury in 1987.

“If you were involved in international capital markets from the ‘70s throughout the ‘80s, the World Bank was really the principal player,” said Roth on why he joined the World Bank after a long career in the private sector when we visited him at home in Rosslyn.

Roth’s penthouse apartment, full of art he collected when living abroad together with his wife - from Chinese Neolithic vases to original art by Andy Warhol and Joan Miro - is where he enjoys his retirement after a remarkable career in investment banking.

“The best thing about retirement for me is not having to travel. Apart from visiting our four children,” said Roth, the World Bank Treasurer in 1987 to 1991.

When he landed on H Street in Washington, DC, Roth immediately became part of history in the making.

"“You can call it conservative innovation or innovative conservatism. But the changing marketplace, apart from the Bank’s issues, both in terms of the deepening of markets, the integration of markets around the world and the new technology allowed the continuous increase in new ideas, and those new ideas would lead to new issuing techniques, new structures, new types of bonds,”"
Don Roth
Former World Bank Treasurer (1987-1991) 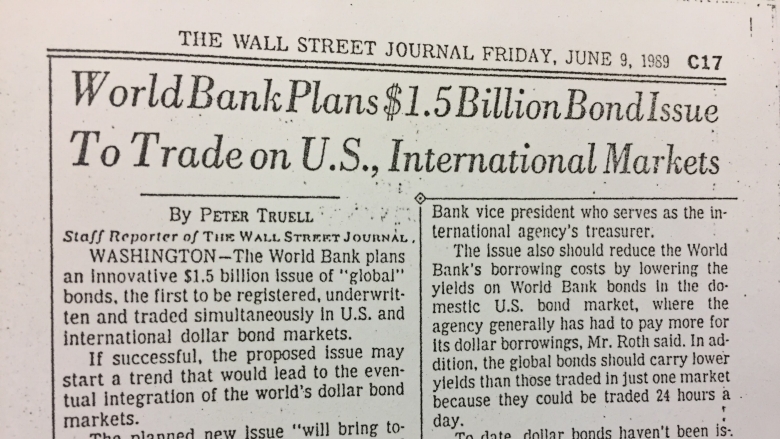 For some time, teams at the World Bank Treasury have been working on a groundbreaking idea of what would be termed a “global bond”, but the concept was unheard of in the ‘80s. Treasury was designing a bond with unrivaled liquidity that it hoped would be acceptable worldwide.

Over the course of several years, Roth and colleagues conducted painstaking research into the habits and desires of the world’s leading investors and securities funds. As it was noted in The Wall Street Journal in June 1989, until then bankers believed buyers in different markets had separate investment criteria.

“If successful, the issue could start a trend that lead to the eventual integration of the world’s dollar bond markets,” The Wall Street Journal rightly predicted.

On September 18th, 1989, the World Bank launched its first global bond offering, a USD 1.5 billion 10-year issue, simultaneously in the Euromarkets and the US domestic market. It was the largest fixed rate dollar denominated debt issue ever in the international capital markets. The issue was seven times oversubscribed and paved the way for the boom of issuance that followed in the ‘90s.

However, prior to this revolutionary issue, Roth faced a tremendous amount of skepticism.

“We wanted to make the coupon paying environment more uniform between the various markets on the semi-annual versus annual pay. We wanted to reduce the cost of issuance in terms of the frontend fees that were paid. We wanted to make the trading more liquid in the marketplace by not having bonds traded in Europe or in the United States, but having them traded on a global basis. There was skepticism that it would go the other way and that would widen spreads or be less liquid, etc. But as it turned out, it was very, very successful,” said Roth.

The first Global Bond issue was without a doubt a milestone in the development of the international capital markets. The Independent called it “World Bank’s Trail Blazing Issue”.

As Roth reflected on his days as Treasurer and on the 70 years since that first World Bank Bond of 1947, he noted that the Bank always made sure to encourage staff to stay on top of changes, and quite often, to lead changes through innovative issues, despite its conservative financial policies.

“You can call it conservative innovation or innovative conservatism. But the changing marketplace, apart from the Bank’s issues, both in terms of the deepening of markets, the integration of markets around the world and the new technology allowed the continuous increase in new ideas, and those new ideas would lead to new issuing techniques, new structures, new types of bonds,” said Roth.

Story and Video by: Rita Stankeviciute