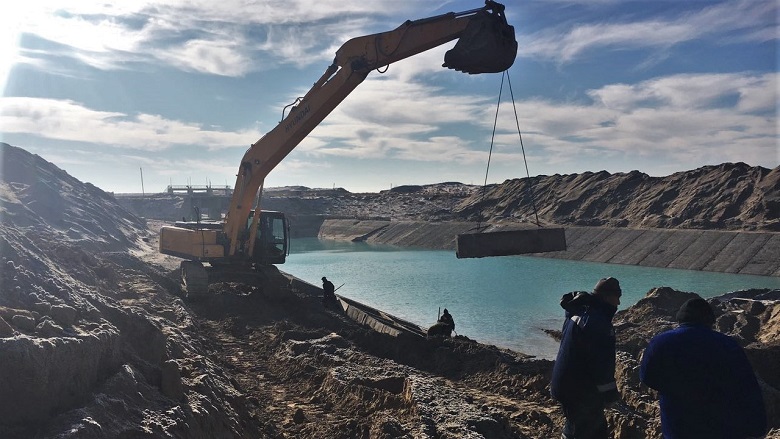 It was a brutally cold, windy day in February when the World Bank team reached a project site in Elikkala district of Karakalpakstan, an autonomous republic in the north-western part of Uzbekistan. The temperature was -12°C, but it felt more like -20C because of the wind-chill. Weather extremes are the norm in this region, which is surrounded by some of the world’s largest deserts. During winter, the temperature can drop below -20°C, while in summer it can easily reach +50°C. There is practically no rainfall throughout the year, making life here even more difficult. 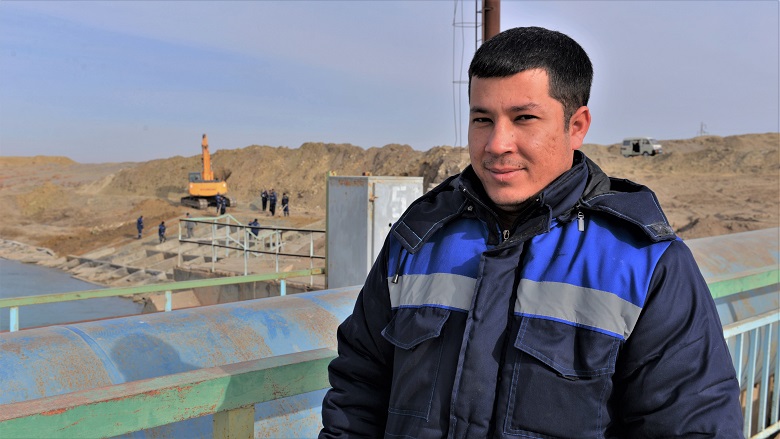 As harsh as they are, however, the climate conditions won’t put a stop to the ongoing civil works along part of the Bustan irrigation channel in South Karakalpakstan. Islombek Ismatov manages the day-to-day operations on the construction site.

After graduating from a university in Spain, where he earned a Master’s degree in energy studies, twenty-nine-year-old Islombek returned to Uzbekistan. He joined a local construction firm contracted under the project that supports improvement of water resources management in South Karakalpakstan.

“The climate in Karakalpakstan is certainly different to that in Spain, but you get used to the frigid temperatures and to the heat here. In fact, it stimulates us to work even more enthusiastically,” says Islombek with a wide grin.

Islombek takes his duties seriously, and even had to miss his son’s birth last summer due to the heavy workload at the construction site. 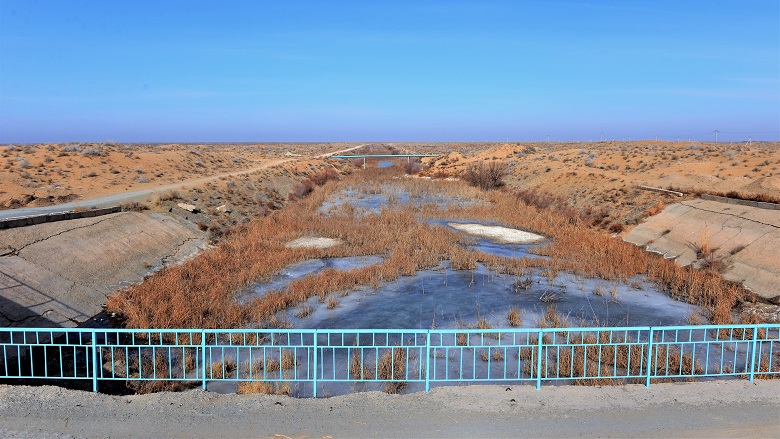 A segment of the Bustan irrigation channel, which will be restored under the project.

“Our firm is planning to complete the civil works along the Buston channel this year. Thousands of farmers in several districts of South Karakalpakstan will be able to receive water for the irrigation of their lands. Lack of water in this region makes it more valuable than gold,” adds Islombek. 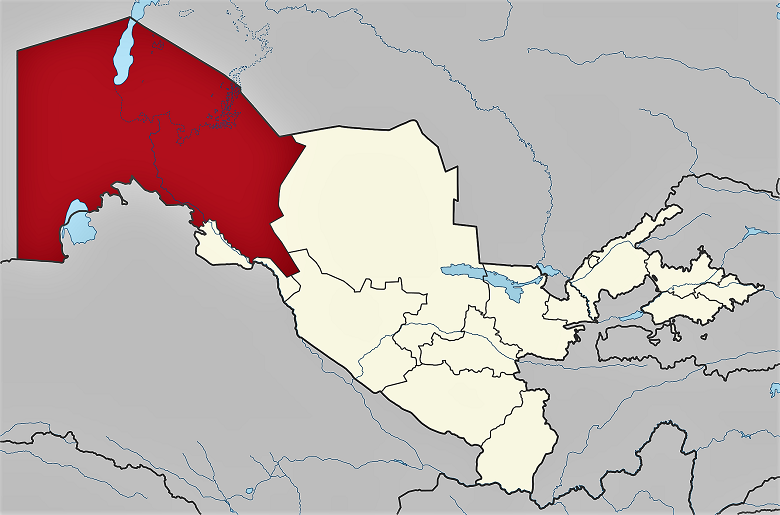 Karakalpakstan occupies over one-third of Uzbekistan’s territory (447,400 km²) and has a population of about 1.7 million people. (Image: Wikipedia)

Karakalpakstan is one of the poorest regions in Uzbekistan, with a poverty rate of 32%. This region has been adversely affected by the shrinking of the Aral Sea, which started during Soviet times and led to a serious human health, economic and environmental crisis.

Inefficient water management and deteriorating irrigation and drainage systems have contributed to growing salinization of land and water resources in irrigated areas, exposure to dust storms and poor-quality drinking water. 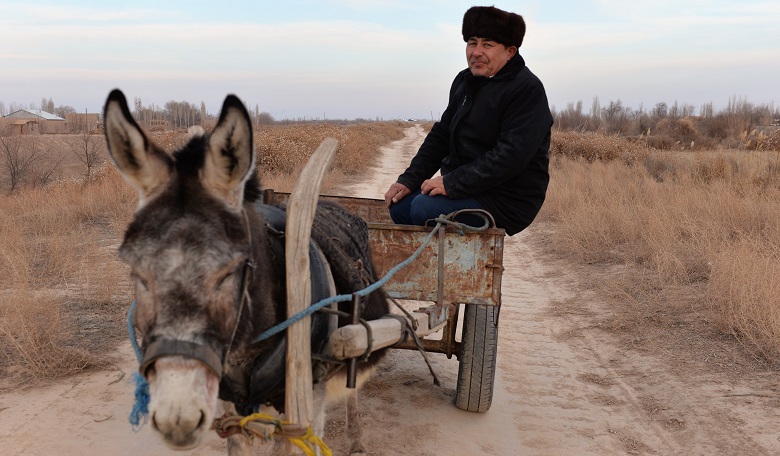 A resident of Elikkala district of Karakalpakstan.

Consequently, the local population has been impacted by increased food insecurity, forcing many people to endure severe living conditions, or to relocate. The collapse of the fishing industry, and decline in the agriculture, healthcare and education systems have added to outward-migration. Up to 30% of working-age people in Karakalpakstan have left to find work in neighboring Kazakhstan and Russia.

The economy of the region is mainly supported today by the production of cotton, livestock and melons – but it also relies heavily on extensive irrigation development, much of which is poorly managed, unfortunately. Improving irrigation systems is therefore critical to helping the local population here move out of poverty.

Large-scale irrigation and drainage development in Uzbekistan started in the late 1950s, with the construction of extensive waterworks, reservoirs and irrigation networks – but this water infrastructure is now aging. Due to deteriorating infrastructure and poor water management, it is estimated that the country loses about US$1.7 billion annually.

The South Karakalpakstan Water Resources Management Improvement Project covers three districts, including Beruniy, Ellikkala, and Turtkul districts. More than 40% of the irrigation supply in this area continues to depend on three major pumping stations and more than 20 floating pumping stations that withdraw water from the Amu Darya river. The total annual energy cost of pumping water amounts to about US$2.4 million.

To reduce the dependence on pumping, the project will develop a gravity off-take from the Tuyamuyun reservoir and dismantle all lower Amu Darya pumping stations serving the project area. This will result in energy savings equivalent to the annual consumption of a city of 160,000 inhabitants. 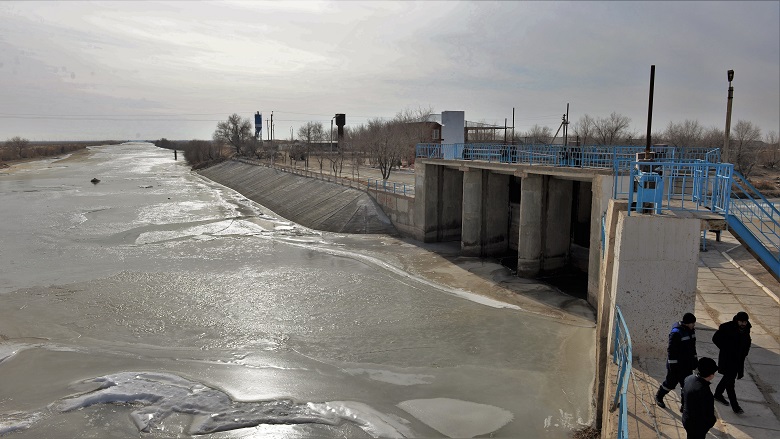 Seventy kilometers of the Bustan irrigation channel will be modernized, leading to a significant reduction (50%) in water losses, and less water withdrawn from the Amu Darya. Irrigation supply will become more reliable, and farmers will be able to grow higher-value crops, such as fruits and vegetables, which are less water intensive and can generate incomes five times higher than cotton and wheat. 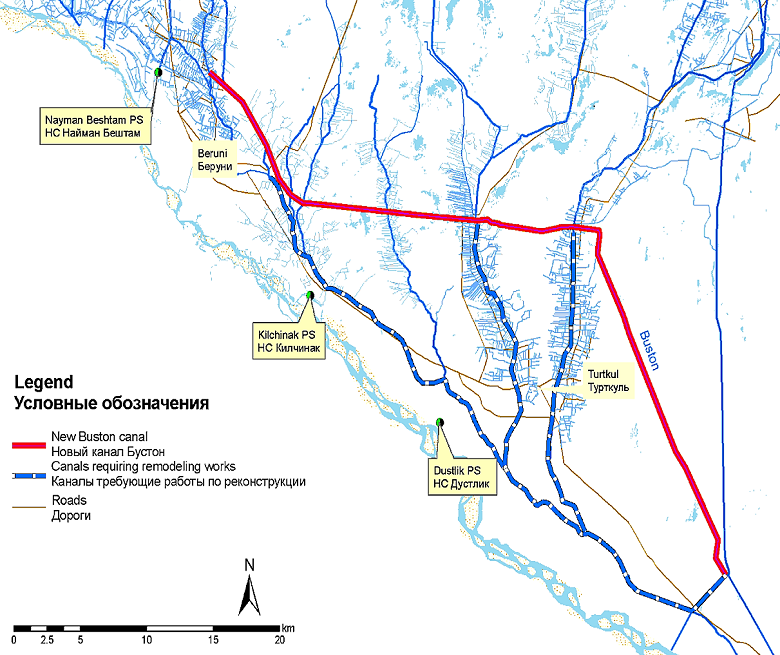 Thanks to the project, 1,500 private farms and 40,000 small family farms will benefit from more reliable water distribution. More than 30,000 ha of abandoned land will be recovered for horticulture and fodder crops production, once the irrigation water supply is restored. 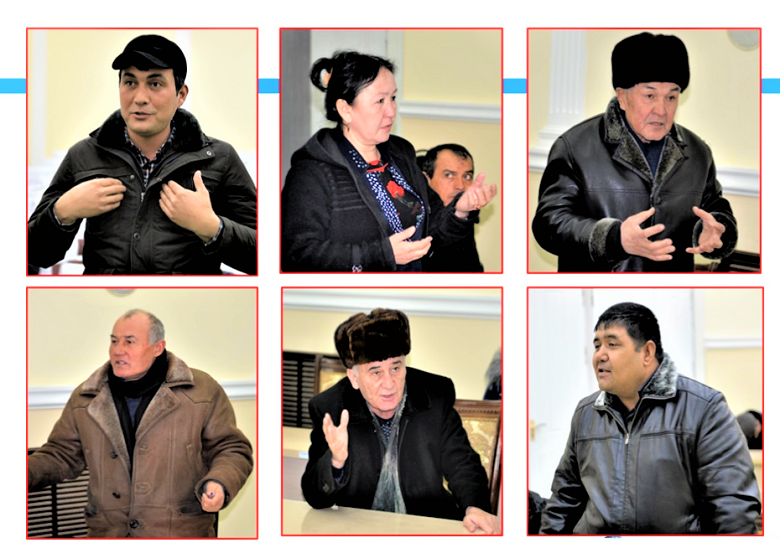 Consultations with farmers from Beruniy, Ellikkala, and Turtkul districts in the South Karakalpakstan in February 2018.

During consultations with local inhabitants of the project area, farmers stated that the improved irrigation would not only allow them to create additional jobs on farms, but that new job opportunities would also be possible in downstream production – in the processing of juice, jam and cheese, for example, as well as in the storing and packaging of agriculture products (fruits, vegetables, dairy and meat), which can later be sold on the domestic market or exported abroad.

The Bustan channel’s conditions before and after the civil works completed by Islombek’s construction team.

Islombek Ismatov swipes through photos on his smartphone to show the condition of the Bustan channel both before and after his construction team’s work. He is happy with the results, and says confidently that 2018 will be a year of great achievements.

This summer, the construction team will complete the civil works along the Bustan channel to bring long-awaited water to fields of Karakalpakstan. Having accomplished this mission, Islombek is planning to be at home with his family, celebrating his son’s first birthday.