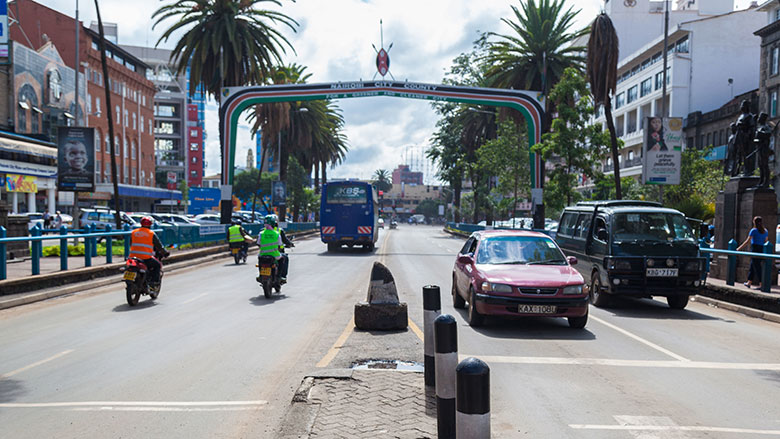 Private sector investment is key to augmenting government spending on infrastructure development for Kenya to sustainably meet its infrastructure-driven growth potential by 2030.

NAIROBI, June 5, 2018 – In the five years that Dennis Ashiono, 41, has plied the Nairobi-Nakuru highway as a matatu (minibus) driver for Nairobi Western Classic Shuttles, he has seen enough accidents to write a dossier on the road regarded as “one of the deadliest on earth.”

From trucks that ram other vehicles because of faulty brakes, to reckless driving on the two-lane highway, Ashiono adds unplanned, unmarked speed bumps that pop up overnight to the list of highway hazards.

“I’ve witnessed many cases where a truck’s brakes fail and it ends up hitting a vehicle that lands in a ditch or hits another vehicle, leading to a multiple crash,” Ashiono said.

That may soon change. With investment from the private sector and support from the World Bank, the Nairobi-Nakuru Highway, officially known as A104, is set for expansion.

For Caroline Cerruti, World Bank senior finance sector specialist, crowdsourcing long-term finance for the project through a Public-Private Partnerships (PPP) arrangement seemed to be an obvious option. PPPs are one financing model that dovetails with the World Bank Group’s emphasis on Maximizing Financing for Development (MFD)—part of the Joint Principles for Crowding in Private Sector Finance, leveraging the private sector and optimizing the use of scarce public resources. Through the Kenya Infrastructure Finance Public Partnership Project, the Bank is providing technical assistance to build frameworks and methodologies for PPPs and advisory services for project preparation and procurement, says Shyamala Shukla, World Bank senior PPPs specialist.

Nairobi-Nakuru highway is one of the many projects prepared and being brought to market under this loan not to speak of the entire legal, regulatory and institutional framework that was created with the Bank’s technical assistance under the IFPPP, Shukla added. Prior to the IFPPP implementation, there was nothing except a PPP Act and a Director for PPP Unit, she said.

“Now we have a world class framework and methodologies, a high level of skills within government and a robust pipeline of projects,” Shukla said.

Reiterating the private sector value, Cerruti added that “institutional investors such as pension funds and insurance companies have long-term liabilities, and infrastructure PPPs are usually long-term assets,” she said. “Institutional investors provide local currency, which is needed to limit the contingent liabilities of the government.” This is what Rachel Muthoga, deputy head of Public-Private Dialogue at the Kenya Private Sector Alliance (KEPSA) is promoting. Progress in the energy sector shows continued interest in PPPs.

“Quite a number of private players have managed to come onto the scene and quite a number of PPP projects have taken off,” Muthoga said, noting that potential for an infrastructure PPP is both exciting and innovative, and would position Kenya to be a role model for Africa. Muthoga is concerned about the Nairobi-Nakuru highway’s dubious reputation as one of the world’s top 10 killer roads. From December 2017-January 2018, for instance, the road registered a dramatic upsurge in fatal accidents, underlining the need for the infrastructure PPP initiative.

For Cerruti, if something must be done to honor the killer road’s victims, it’s cutting the number of people who risk dying just because they choose to travel home or to visit their families. “This calls for a lot of interest, and in a special way, the government’s, for the project to proceed and succeed,” she said.  Still, constraints exist. “PPP projects need to be “bankable,” that is, have a stream of long-term and secured revenues to back up the private investment,” Cerruti said. “The model that has been retained by the government is to have users pay a fee for using the road, to make private investment viable. The government will also backstop revenues in case they are insufficient, and, therefore, it should have a strong fiscal position to provide comfort to investors.”

One challenge is the proposal for tolls on the new road, which will be used to repay private investors and financiers.

The government is eyeing key financing partners such as the Retirement Benefits Authority (RBA) and the Insurance Regulatory Authority (IRA), regulate member funds and are required to pay members when needed.  “So, a balance needs to be struck between liquidity and long-term investing,” Cerruti said.

Capacity is another constraint that prevents institutional investors from lining up. Such investors may be familiar with their local capital markets, but not with project finance where they take the risk on one single asset, with only future cash flows and no track record. Suitable instrument is another. For instance, pension funds cannot provide debt directly, so if they want to be exposed to PPP projects with senior debt, they need a suitable investment vehicle.

A third one pertains to prudential regulations that may not allow institutional investors to put their money into infrastructure development—a concern IRA and RBA share.

Despite constraints, Nzomo Mutuku, RBA acting chief executive officer, is excited by “emerging opportunities for pension schemes to participate in infrastructure projects through PPPs.” Such investments have the potential to deliver good returns to members besides their “feel-good effect,” as they see themselves contributing to development and transforming fellow Kenyans’ lives. According to Mr. Mutuku, investment guidelines, therefore, need amending to have a separate category for debt instruments for PPP projects for infrastructure or housing with a proposed maximum of 10 per cent. The final decision on this lies with trustees and fund managers of each pension scheme.

Though the road presents some challenges, there is consensus that expanding the highway will improve the economy. “Infrastructure investment is long-term, which dovetails with pension schemes, which are long-term investors and may mean higher returns for schemes, and by extension, scheme members,” Mutuku noted.

Robert Kuloba, chief manager of policy and research for the IRA, said infrastructure PPPs have long-term benefits. It will save lives, he said, and save funds paid out in claims, which insurance companies can then channel to development in a win-win situation.