Fishing for Success: The Fish Kiosk Entrepreneurs of Tamil Nadu 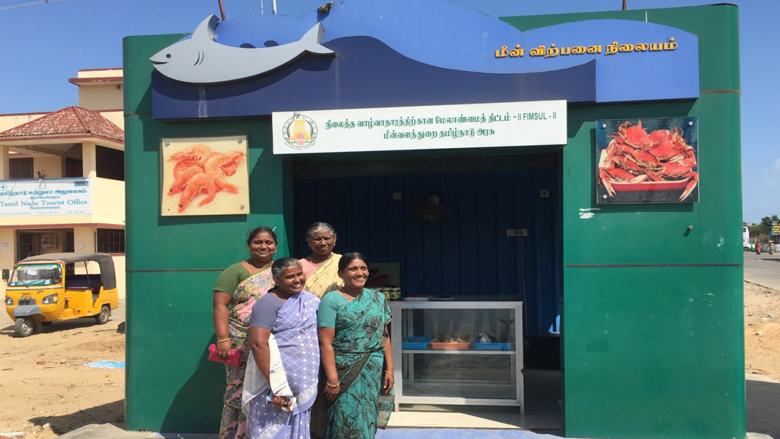 It's a hot day in Marthandam, a town in Tamil Nadu's Kanyakumari district near the Kerala border, just a few kilometres from the coast. As evening sets in and the sun embarks on its final descent towards the western horizon, a dusty street near Marthandam junction comes alive. Men, women and children swarm out to kirana stores (grocery shops), vegetable vendors, fruit sellers and various other commercial establishments.

Amidst all the shops on the street, one particular establishment stands out, even to the casual eye. With its storefront painted in bright blue and green and a big cut-out of a merry fish hanging over the entrance, Marthandam's fish kiosk is unmissable.

A gaggle of people stand at the kiosk's counter. Inside, three women – Celine Mary, Mary Shanti and Chandra – move about busily. It's 6 pm and peak hour for the kiosk. Business is brisk.

“Tastes like home food,” smiles a customer, when Celine Mary hands him a packet of fish curry and rice.

As the man pays up and leaves, another customer steps forward. He points to a bottle of fish pickle at the counter and asks if he can get 100 of those before the end of the week.

“I am going to Dubai next week. This pickle is very popular with the Indian community over there,” he explains.

Another customer waits as Mary Shanti packs 500 grams of seer fish, while another asks if the 'fish fry', a preparation popular with customers in the area, is ready yet.

The women would stay busy for the next three hours.

A new beginning for those who have lost everything

The Marthandam fish kiosk is one of the 12 fish kiosks supported by the Tamil Nadu Department of Fisheries (TNDoF) across coastal Tamil Nadu as part of the World Bank-supported Coastal Disaster Risk Reduction Project (CDRRP). The initiative is directed at widows from fishing families who have lost their husbands at sea in isolated incidents or during disasters such as the 2004 Tsunami that claimed the lives of more than 8,000 people in Tamil Nadu and severely affected the livelihoods of thousands of coastal households.

Under the initiative, four or five women come together to run a kiosk. The Project provides them with a furnished space, shelves, and equipment such as freezers. Trainings are organized for the women in various technical areas like preserving fish and other perishables, maintaining hygiene, and preparing value-added products such as pickles and masalas (spices). The women have also been linked to an entrepreneurship training program conducted by the Entrepreneurship Development Institute (EDI).

"We attract regular customers. This is because people know that we maintain hygiene and preserve the fish well. They know that they will find more varieties of fish here than in the market. That is how we are different from the fish market."
Mary Shanti 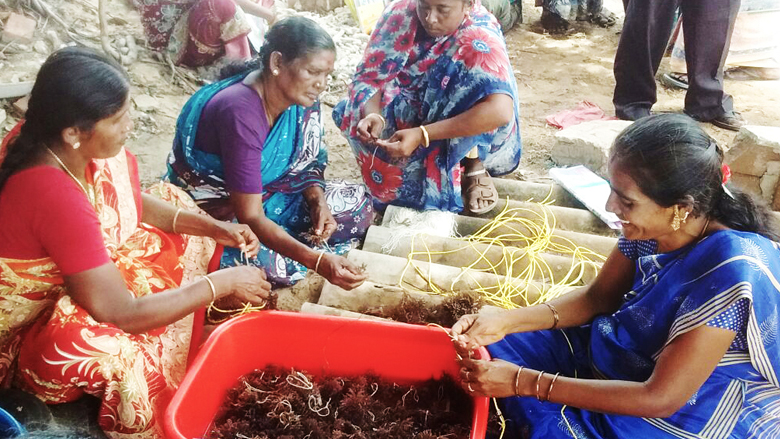 The first few kiosks opened in August last year, with the core offering being fresh and dry fish. Soon, the women realized that they could branch out into other offerings such as freshly prepared fish-based meals and snacks, and earn bigger margins. Irudaya Mary, who runs one of the two kiosks in Rameshwaram with three other women, decided to stock shelf-stable products such as fish pickles and masalas produced by a local Self-Help Group, and discovered that they were an instant hit with the customers. Other kiosks quickly followed suit.

The women ensured that whatever they sold was hygienic and of good quality.  Word about the kiosks spread, and before they knew it, they had a loyal clientele.

“Only half a kilometre away, there is a fish market, with several vendors selling fish,” says Mary Shanti. “Despite this, we attract regular customers. This is because people know that we maintain hygiene and preserve the fish well. They know that they will find more varieties of fish here than in the market. That is how we are different from the fish market.”

“That is our USP,” chips in Chandra with a smile, flaunting a business term she picked up at the EDI training program.

The kiosks earn up to Rs. 6,000 per day in revenues, with a profit margin of 20 percent to 30 percent – a vast improvement in income and quality of life for most of these women.

For Celine Mary, the kiosk represents a turning point in a life marked by crushing poverty and back-breaking struggle that was thrust upon her when she lost her husband 14 years ago to a disease he contracted due to spending weeks on end at sea. Suddenly, she was left with three young children and absolutely no idea of how to provide for them.

“I began by working in others’ homes as a help,” says Celine Mary. “After a while, I decided to start selling fish. Every day, I would haul a huge basket of fish on my head and go door-to-door for hours together in this merciless heat. I did this for 10 years. Today, thanks to the livelihood program of the Department of Fisheries (DoF), I no longer have to go knocking on people’s doors. Customers come to our kiosk instead. I earn a lot more than earlier too!”

However, depleting fish stocks on account of overfishing is forcing fishermen to venture further and further into the sea in search of a decent catch. These trips frequently span 500 nautical miles or more, which means fishermen spend as many as 20 days at sea. This significantly ups the risks, especially for the small and marginal fishermen.

In September 2016, 19 Indian fishermen were arrested by the British navy near Diego Garcia. Diego Garcia is an island on the other side of the equator almost 1000 nautical miles away from the Indian coast. Earlier this year, Pakistani authorities released several Indian fishermen they had arrested in Pakistani waters. Some among them were from Kerala.

One of CDRRP's objectives is to build resilience in fishing families by reducing their income dependence on fishing. The fish kiosk initiative is one among several women-focused initiatives aimed at diversification of livelihoods for fishing households.

An initiative in Kanyakumari district has trained 25 women in developing innovative crafts products using coconut shells, and selling them in national and international markets through local entrepreneurs. Another initiative that is being implemented in multiple locations across the coast has trained more than 100 women in seaweed cultivation, provided them with necessary equipment and know-how, and linked them to the market by facilitating purchase agreements with private sector buyers. An innovative pilot by TNDoF has developed an intensive 90-day program in partnership with Alagappa University's Study Circle to coach youth from fishing households to clear the Coast Guard entrance exam. Of the 36 boys who participated in the first batch, four have already attempted the entrance exam, and two have cleared it. Several students are being sounded out by hotels, adventure sports bodies and other private organizations to work with them as lifeguards or trainers. 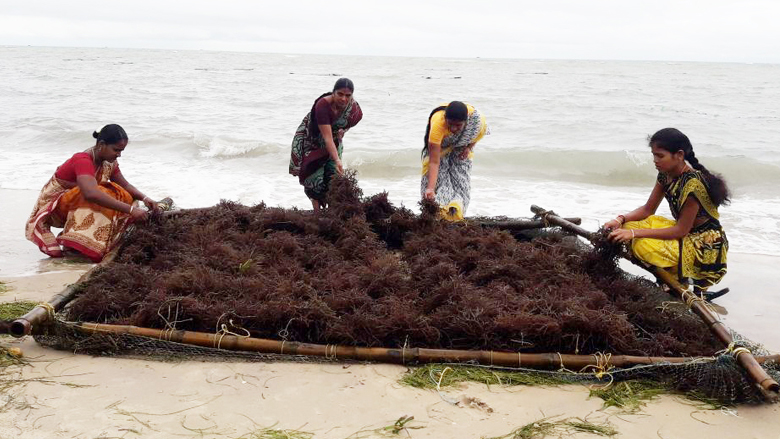 What’s next for the fish kiosk entrepreneurs?

What's next? Ask them this question and the women reel off a bunch of ideas – catering, more shelf-stable products, multipurpose packaging equipment, home delivery and so on.

“To graduate to the next level, the women now need the tools to turn their operation into an enterprise. This means learning how to write a business plan, how to project costs and revenues, how to assess risk, how to use available government schemes to raise capital,” says Vinayak Ghatate, Senior Rural Development Specialist, World Bank.

This was one of the several ideas that were discussed at a brainstorming meeting between the project team and livelihood experts from the World Bank early this year.

“There is great demand for such fish-based products in other parts of the country. There is no reason why we cannot emulate the Amul model and create an umbrella brand to take these products to the entire country,” says Rajendra Ratnoo, Project Director for the FIMSUL-2 (Fisheries Management for Sustainable Livelihoods) initiatives under CDRRP.

The project team has identified Tamil Nadu Fisheries Development Cooperation as a possible front-end agency that can brand and market these products. A detailed market study is being planned. A scale-up plan is being developed.

“Bigger things lie in store for the entrepreneurial women of coastal Tamil Nadu and the Project is a testimony to the collaborative efforts of the Government of Tamil Nadu and the World Bank that started way back in 2005 after the devastating Tsunami,” added Deepak Singh, Senior Disaster Risk Management Specialist of World Bank.