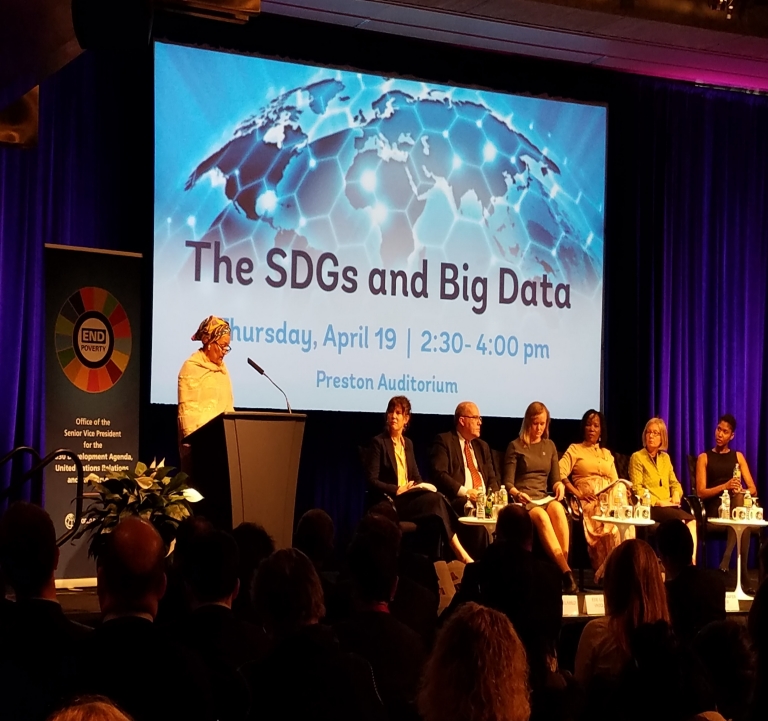 A revolution is well under way. World Bank Group (WBG) projects are using Big Data to help governments reimagine solutions and improve service delivery and work toward achievement of the SDGs. In Haiti, for example, mobile phones are being used to connect urban residents to jobs, services, and economic opportunities. In the Philippines, governments are using GPS data from taxis to reduce accidents and improve emergency services.

To highlight local efforts and discuss some of the challenges associated with Big Data, World Bank Senior Vice President Mahmoud Mohieldin hosted a high-level seminar during the WBG Spring Meetings. The session consisted of two panels. During the first, Deputy Secretary-General of the United Nations Amina Mohammed discussed the enormous benefits of Big Data for development—and acknowledged the risks of infringement of privacy the mining of Big Data poses. To address the issue, the United Nations has developed a guidance a note on protecting privacy and using Big Data in an ethical manner. More than 30 UN agencies use the guidance note.

Ede Ijjasz-Vasquez, Senior Director, WBG, stressed the need for partnerships between governments and the private sector and talked about how policy makers use various sources of data to make decisions. In Sri Lanka, for example, night-light data indicated that 45 percent the country is urbanized. The finding came as a surprise to officials, who thought of country as overwhelmingly rural. The policy implications of the finding were massive, he said.

Dr. Jennifer Musisi, Executive Director, Kampala Capital City Authority, talked about the extraordinary results achieved in Kampala. A mere eight years ago, the city had no technology or data—even on basics, such as the size of the population. Since then, it has built databases in order to inform decision making, plan, and communicate with the people being served. Efforts have had remarkable effects, almost doubling revenue collection, for example.

Ms. Kai Klandorf, Executive Director, Network of Estonian Non-Profit Organizations, described efforts in Estonia, a tiny but tech-savvy country, where civil society actively uses date. She described crowd-sourced garbage pick-up and citizen involvement in bringing initiatives to the legislature. Dr. Jaana Remes, Economist and Partner, McKinsey Global Institute, noted that “half to two-thirds of the SDGs can substantially benefit from Big Data solutions. And the range at which you can improve things is 10–30 percent.” Health and water are just two areas in which the impact has already been huge.

Prof. Danielle Wood, Director, Space Enabled Research Group, Media Lab, Massachusetts Institute of Technology, talked about the importance of data from space—to air quality, forestry management, disaster response, and other areas. She stressed the need to bring technical experts together with people who know the local context and to support entrepreneurs in developing local solutions.

In closing the session, Mr. Hartwig Schafer, VP of Global Themes, WBG, noted that each of the examples “is a testament to how Big Data will help us achieve them.” He also recognized the teams that work on Big Data as the unsung heroes of development (as their work underlies many of the Bank’s most important projects) and identified two areas for improvement. The first is the need for the donor community to break down silos and be more deliberative about how they share ideas. The second is the need for partnerships with the private sector, which controls most of the data needed for development. “This is a partnership that we should harness, for the benefit of the people of the globe.”

Mr. Shaolin Yang, Managing Director, WBG, opened the second panel. He observed that many governments still do not have access to adequate data on their populations and that data are particularly thin on the poorest and most marginalized people—the very people governments needs to focus on to meet many of the SDGs.

Mr. Mohieldin moderated the second panel. It consisted of ministers from Egypt and Colombia and the vice-president of the European Investment Bank.

Egypt’s new constitution gives citizens the right to access to information, according to H.E. Dr. Sahar Nasr, Minister of Investment and International Cooperation. Egypt’s cabinet has finalized a cyber-crime law and is working on efforts to increase data protection. Colombia just approved a White Paper on Big Data, according to Luis Fernando Mejia, Director, National Department of Planning, Colombia.

Like other countries and institutions, it is trying to achieve the delicate balance between guaranteeing access and protecting privacy (its White Paper is available on the Bank’s Open Data site). Mexico is using Big Data to improve its massive conditional cash programs, according to Paulina Terrazas, Chief of Special Projects for the President of Mexico. They are sending SMS reminders to pregnant women, for example. The European Investment Bank is spending billions of euros on ICT infrastructure and also financing individual projects, according to Vice President Ambroise Fayolle.

View a video of the full event here.