A Strong Foundation for Greater Impact 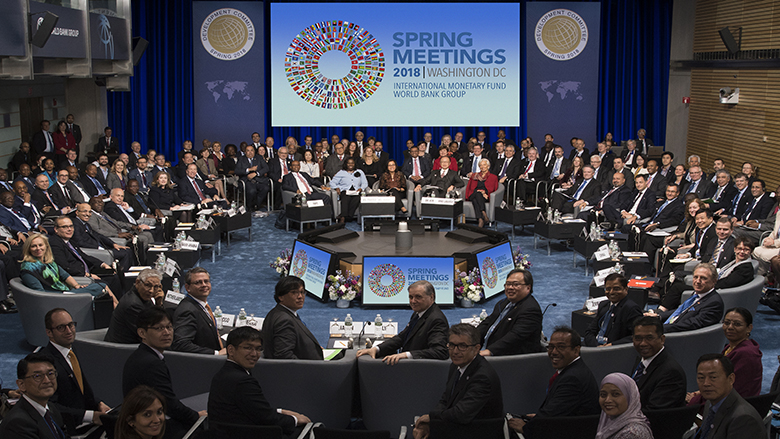 Despite expectations that growth will be robust in the near term, developing countries face challenges to keep up the pace of progress and ensure inclusive, sustainable growth amid structural changes to the global economy. The World Bank Group is uniquely placed to address global challenges and help countries achieve their goals in today's increasingly complex development landscape.

This was a key message from the Development Committee, a ministerial-level forum of the World Bank Group and the International Monetary Fund, in a communiqué issued at the close of the institutions' Spring Meetings in Washington.

The committee reiterated its support for the Bank Group's twin goals of eliminating extreme poverty and boosting shared prosperity, while recognizing that the Bank Group must strengthen its financial capacity to meet the aspirations of its shareholders, mobilize capital at scale, and respond to global development challenges. The committee agreed to a capital increase for IBRD and IFC as part of a package of fundamental reforms that will allow the Bank Group to deliver development results more effectively while becoming more financially sustainable and efficient. It will help the Bank Group continue to lead on global public goods and scale up its support in fragile and conflict-affected situations.

World Bank Group President Jim Yong Kim, in his remarks at the press conference that opened the Spring Meetings, also highlighted the financial strengthening of IDA, the World Bank's fund for the poorest countries, through an inaugural bond issue that raised $1.5 billion from investors around the world this week. "IDA's entry to the global capital markets is historic—the latest transformational shift in how we approach development finance," he said, adding that "IDA will be able to dramatically scale up financing to help countries meet the 2030 development goals, and deliver greater value to shareholders."

Both the committee's communiqué and Jim's speech at American University prior to the meetings emphasized that the Bank Group must continue to crowd in private sector resources for development, as the main driver of investment, innovation, and jobs. The committee called on the World Bank, IFC, and MIGA to work closely together to mobilize private investment as part of maximizing finance for inclusive growth and poverty reduction.

Jim also underscored the importance of building human capital as the foundation for long-term development progress in the Bank Group's client countries. At the upcoming Annual Meetings, scheduled for October in Indonesia, the Bank Group will release an index measuring countries' human capital to help inform government leaders' decisions on investments in health and education.

While acknowledging a range of pressing challenges for developing countries—a rise in public debt levels for low-income countries, climate and disaster risks, and major gaps in gender equality, among others—the committee reiterated its support for the Bank Group's role in building global solutions. The committee's communiqué also noted that the capital increase is tied to adjustments that will update the balance in shareholding among the Bank Group's member countries.

In his speech, Jim noted that optimism has defined the vision of the World Bank Group from the outset. He quoted U.S. Treasury Secretary Henry Morgenthau, who stated the new organization's objective at the Bretton Woods Conference in 1944: "A dynamic world economy in which the people of every nation will be able to realize their potentialities in peace, to raise their own standards of living and enjoy increasingly the fruits of material progress. For freedom of