Skip to Main Navigation
This page in:_
FEATURE STORY March 20, 2018

Reuse of the dredged sediments

The setting sun paints the sky and sea in red and orange. Tiny pieces of broken seashells glitter in the vast sandy beach.  This is the location of the Putou Operation Area of the Meizhou Bay Port. This 1,200-square-meters land has been filled with dredged sediments from the Meizhou Bay Navigation Improvement Project, and six berths for ships will be built here.

Supported by a $50 million loan from the World Bank, the project seeks to widen and deepen 21.5 kilometers of the existing main channel through dredging and rock blasting. Managing the disposal of large amounts of dredged sediments and debris was a challenge.

“The traditional way is to dump it into the ocean.  But it would cause pollution of the ocean. So we used the dredged sediments to backfill the land area behind the port, and turned the waste into something useful,” said Chen Jianxin, a division chief from the project management office.

Reusing the dredged sediments, estimated at 16 million cubic meters, could save up to RMB100 million ($15 million), said Zhao Xiangchao, manager of the Putou Operation Area.

The dredging of the navigation channel has major environmental impacts on bottom-dwelling organisms such as worms, clams, crabs and lobsters, and aquatic habitats, coastal mudflats, water quality and marine hydrodynamics. In addition to mitigation measures, an ecological compensation plan has been carefully designed, which includes a fish reproduction and release program, and a habitats restoration program for planting mangroves.

In the fish reproduction and release program, five fast-growing native fish and shrimp species with high economic value have been selected and bred in a hatchery under the supervision of the Fujian Fisheries Research Institute. These are released in batches during a five-year period.

The fourth release event took place on August 11, 2017 on the coast of Quanzhou. A researcher from the fishery institute conducted a sample count of the tiny shrimps brought in from the hatchery before these were loaded onto fishing boats and released into the sea.  About 150 million baby shrimps was released that day, and researchers will monitor and carry out follow-up surveys to assess the effects of the program later.

The program is welcomed by the local fishing communities. An increase in fishery resources leads to more catches and therefore more income. A fisherwoman who joined the release work said there are now more fishes than before.

The 950-year-old Luoyang Bridge in Quanzhou is the first stone bay bridge built in China, and is one of the country’s four most famous ancient bridges. Near the bridge are large areas of lush green mangroves.  A few egrets can be seen resting or searching for food among the trees. These mangroves are part of the Quanzhou Bay Estuary Wetland Nature Reserve.

“Under the project, we have planted 558 mu (372,000 square meters) of mangroves inside our reserve,” said Lai Xingkai, an engineer from the reserve.

Mangroves play an important role in coastal protection.  Lai listed their three major benefits: they can improve water quality, reduce pollution and eutrophication (over-enrichment of water by nutrients), and prevent red tides; they can reduce waves and strengthen dikes; and they provide a home to birds and coastal animals.

“Our workers are all hired from the nearby villages, and familiar with local conditions. We have more than 40 regular workers to maintain the mangroves,” Lai said.

Chen Chunfang, a local resident in the Zeng’an Village, looks after the mangroves as a part-time job. Every day, she would drive around the mangroves and stop any activity that may be harmful to the trees.  “With the mangroves, the environment has become so much better, and there are so many birds now, particularly in the morning,” said Chen.

"With the mangroves, the environment has become so much better, and there are so many birds now, particularly in the morning. "
Chen Chunfang
a local resident in the Zeng’an Village 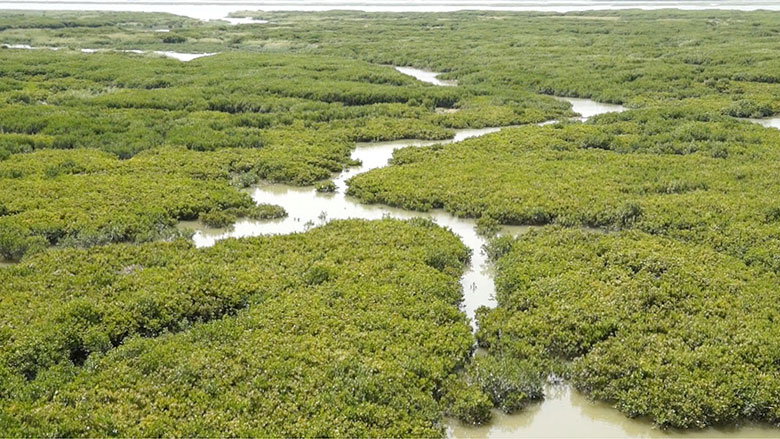 558 mu (372,000 square meters) of mangroves have been planted inside the Quanzhou Bay Estuary Wetland Nature Reserve.

Located between Quanzhou and Putian in the middle of the coast of Fujian Province, the Meizhou Bay Port is a major bulk port, handling approximately 40 million tons of freight in 2010 at 46 berths spread over four port areas. The main commodities handled are crude oil, building materials, coal and oil products, as well as iron ore, grain, and timber. It is also the closest port to some of the inland provinces.

The development of the Meizhou Bay Port will reduce the land transport distance and improve transport connectivity between the land-locked provinces of western Fujian, Jiangxi and Hunan and the ports and cities of the more dynamic coastal region, thus boosting the growth of the underdeveloped inland regions.

Domestic and international shipping companies, as well as the nearby industries that are heavy users of the port such as petrochemicals, power generation, timber processing and grain milling will directly benefit from improved navigation conditions.

Sinochem Quanzhou Petrochemical Co. operates five berths for import and export of crude oil and petroleum products.  Zhang Huaiguo, a manager from the company’s storage and transportation department, expects the project to reduce ships’ waiting time outside the port.

Xu’s words were also echoed by Yang Jin, a deputy engineering manager of the Luoyu Port, a large iron ore port under construction. “Ships of the future will be larger, because larger ships are more environment-friendly and cost-effective,” said Yang.

The port and associated industries have employed more than 30,000 people, with additional jobs provided by the upstream and downstream industries spawned by petrochemical and energy industries, benefiting the local communities.

“The involvement of the World Bank has brought us international experience and best practices,” said Yu Junqi, a deputy director of the project management office. “The project has provided opportunities for knowledge sharing with peers in and outside China, by organizing study tours to major international ports such as Hamburg, Rotterdam and Esbjerg, and inviting experts from Germany and Singapore to give training and technical assistance. This has helped strengthen the capacities of the port authority,” he said.

Contributing to the Belt and Road Initiative

By 2020, the Meizhou Bay Port is expected to increase the number of productive berths from 50 to 90 with handling capacity reaching 200 million tons, and have the channel capacity for the world’s largest bulk carriers to enter. The port authority is also developing several logistics parks and a bulk goods trading platform, and seeking partnerships with other domestic and international sea ports, committed to play a greater role for the implementation of the Belt and Road Initiative, according to its director Li Qing.