Skip to Main Navigation
This page in:_
FEATURE STORY March 12, 2018

An effective and service-oriented tax administration is essential to ensuring a healthy business environment and promoting economic growth. As such, the Government of Tajikistan has made tax reform a major priority for the country as it seeks to achieve its development goals and reduce poverty.

Revenue collection in the country remains challenging, however. This is due to several factors, including poor quality taxpayer services, low institutional capacity, and gaps in tax policy analysis and revenue forecasting. Inadequate staffing, limited training, low levels of computerization and poorly integrated IT systems have further complicated procedures for taxpayers and make data collection difficult for Tajikistan’s Tax Committee.

Coupled with reported corrupt practices by tax officials, these issues contribute to weakening both the business climate and private sector growth. Business surveys have regularly identified weaknesses in tax administration, as well as arbitrary and corrupt behavior by tax officials, as major impediments to the success of small and medium enterprises in Tajikistan.

The World Bank’s Doing Business 2012 report ranked Tajikistan in 168th place out of 183 countries with regard to ease of paying taxes, and found that firms had to make 69 tax payments per year, compared to just 7 in Kazakhstan, 9 in Russia, 41 in Uzbekistan, and 52 in the Kyrgyz Republic.

“Tax reform is a high priority for the Government of Tajikistan,” says Odiljon Jabborov, Head of the Finance Department of the Presidential Administration of the Republic of Tajikistan. “Closing the tax gap and collecting revenue effectively will help us provide the fiscal space needed for investment in high quality public services to our citizens and in infrastructure that will spur economic growth.”

To support the government’s efforts to build a more efficient, transparent and service-oriented tax system, the World Bank-financed Tajikistan Tax Administration Reform Project was launched in 2013. The Project has made significant progress to date in helping the Tax Committee and its field offices to operate more effectively in a newly automated environment. Modernization of IT infrastructure and the introduction of a unified tax management system mean increased efficiency, with reduced physical interaction between tax officials and taxpayers.

The rate of e-filing is now as high as 87.4%, with 97.2% of all legal entities and 77.8% of individual entrepreneurs filing their tax returns electronically. The new system enables the Tax Committee to generate the data necessary for its analytical work, and to improve reporting and tax assessments.

Around 200 electronic kiosks are being built and equipped in remote locations around the country to help taxpayers who wish to file electronically but who do not have access to computers. This will help ensure that the Tax Committee can receive local taxes in time and with less cost.

Thanks to improved taxpayer services, the number of active firms and individual taxpayers filing taxes has doubled, with a significant increase in the amount of revenue collected. A taxpayer in Tajikistan spent 21 days in 2016 complying with all tax-related regulations, compared with 33 days in 2012, according to a recent study by the International Finance Corporation (IFC). This reduction in time spent represents a total of US$ 8 million in savings in one year for all taxpayers registered in the country. IFC has also supported improvements in tax administration by simplifying performance of tax procedures and increasing the quality of services by the tax authorities.

“Such programs have led to a substantial increase in tax collection and a reduction in corruption cited in business surveys,” says Rajul Awasthi, project’s technical lead and the focal point for the Europe and Central Asia region in the World Bank’s Global Tax Team.

Through a dedicated Human Resource Management Information System, the Tax Committee is now able to manage all human resources-related issues such as recruitment, payroll, performance appraisal, benefits and competencies. In addition, an improved tax training institute in the capital Dushanbe, plus four regional training centers, provide regular training sessions to enhance the professional capacity of staff throughout the country. 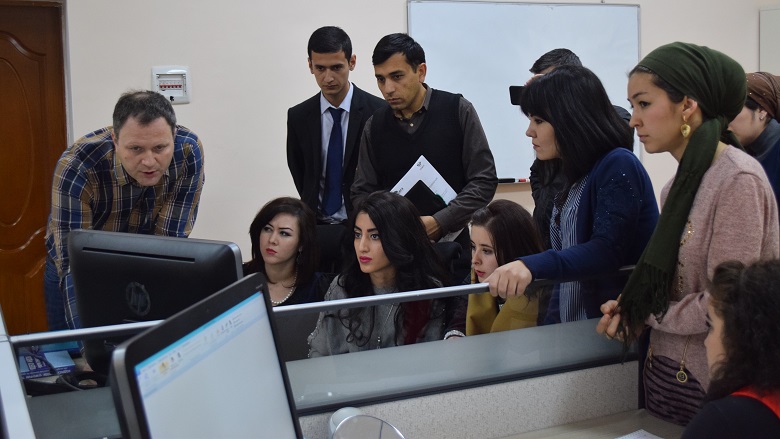 Training for staff at the Contact Center, provided by the Russian High Tech company, Dushanbe, December 2017.

“The Project has achieved good results and we can see significant improvements in the operational capacity of the Tax Committee,” says Hassan Aliev, project leader and World Bank Public Sector Specialist based in Dushanbe. “However, tax administration is just one part of an effective tax system. We will continue working with the Government of Tajikistan to further improve the effectiveness of tax policy in terms of revenue collection, and to that ensure taxation does not impose a negative burden on the business environment.”