Making a Difference: Delivering Services for Yemeni People During Conflict 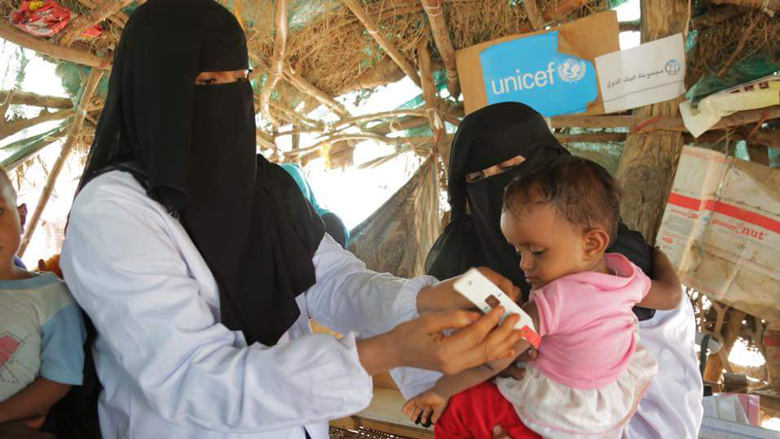 A heath worker measuring the mid-upper arm circumference of a one-year old child during an outreach activity in Hodeida governorate.

The integrated outreach rounds are held four to five times a year at district level across the country where health workers provide health and nutrition services for children and mothers who live far away from functioning primary health centers. Services provided in the outreach activities include screening for children under five years old, referral of malnourished children to health facilities, management of common childhood illnesses such as diarrhea and pneumonia, providing vaccinations for children and women of reproductive age and providing reproductive health services for mothers. Children who are suffering from acute malnutrition with complications are referred to stabilization centers. The integrated outreach is one component of the Emergency Health and Nutrition Project (EHNP).

Hameed, a twelve-year-old Yemeni is currently recovering from a Cholera infection. He was fortunate to receive treatment at a public hospital north of the Yemeni capital, Sana'a. The treatment included an oral rehydration solution at a cholera treatment unit supported by the World Bank and the UN children’s agency, UNICEF. Hameed’s condition is improving daily. This is not, however, his first bout with Cholera. He has already survived one infection. Like millions of children in Yemen he is at constant risk.

A conflict-linked cholera epidemic has caused over 1000,000 suspected cases of which 35% are children. Cholera is not the only risk, in another sign of the sharply deteriorating conditions, 77 percent of the population is in need of some form of humanitarian assistance, and nearly 400,000 children are suffering from severe acute malnutrition.

In the face of this urgent and deepening crisis, the World Bank has joined forces with humanitarian organizations working inside Yemen. In early 2017, the World Bank initiated one of the biggest programs in support of health services in the Middle East and North Africa (MENA) region. The program is being implemented by UNICEF and the World Health Organization, as well as Yemeni government agencies and non-governmental organizations.

In August, the Bank approved an additional US$200 million to help combat the fast-spreading cholera epidemic. Medicines were rushed in and support was provided to health care workers and facilities. 860 Cholera treatment centers and Oral Rehydration Points were established and 640,665 suspected cases were successfully treated. In addition, bulk chlorination supplies were brought in to address the source of the epidemic—contaminated drinking water supplies and inadequate sanitation systems.

As a result, the cholera epidemic rate of new cholera infections has slowed and the case fatality rate has fallen from 2.3 to 0.21 percent.

The World Bank is strengthening the health care system so that it will be in a better position to respond to future crises. Currently, 50 percent of the country’s health care facilities are not functioning.

"The conflict and the malnutrition and disease that have accompanied it are having a devastating impact on Yemen’s population," said Sandra Bloemenkamp, the World Bank’s Yemen Country Manager. "Yemenis need urgent support now to help them get through the conflict, but also so that they will be ready to start rebuilding when the fighting ends." 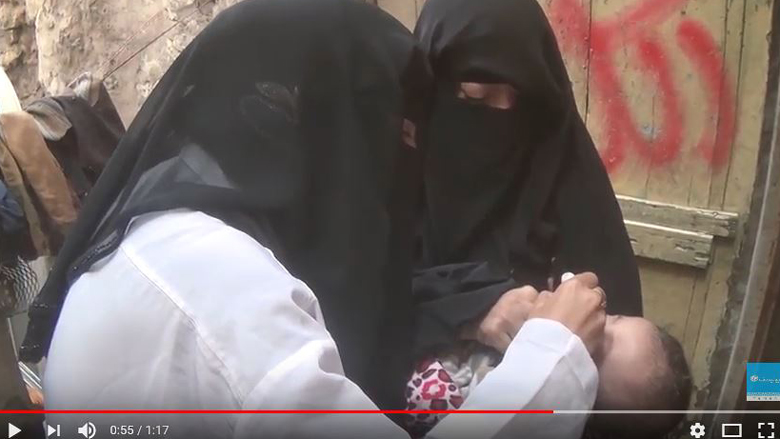 Among the main results so far of the Emergency Health and Nutrition Project:

The Bank’s program in Yemen provided training for thousands of health workers on treating the disease, strengthened the local capacity to treat and manage cholera cases, continued to provide bulk chlorination for water supplies, funded rehabilitation of critical wastewater treatment plants, and supported one of the largest ever cholera vaccine campaigns aiming to reach millions of Yemenis.