Hot pepper: from a Jamaican farm to the global market 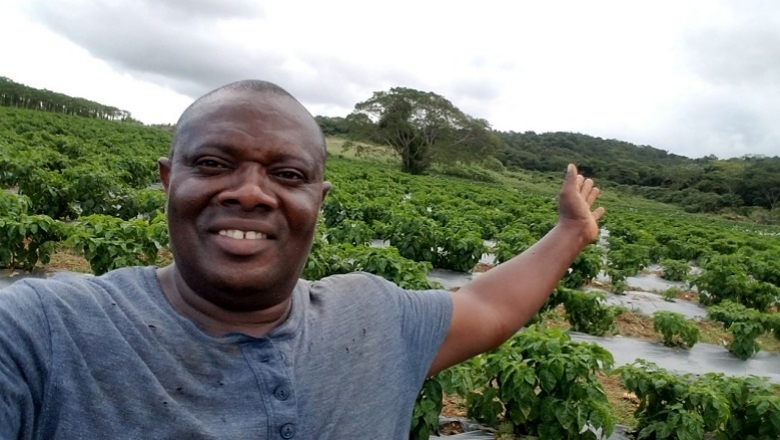 Peter Campbell at his pepper farm

For more than 18 years Peter Campbell made a living from construction, but dabbled a bit in farming. Five years ago, he decided to go full-time into agriculture, a decision he has not regretted.

Today, his 400-acre Coastal Pepper Farm is his pride and joy.

Campbell is a beneficiary of the Jamaica Business Fund (JBF), established under the Government of Jamaica and the World Bank Foundation for Competitiveness and Growth Project, to provide financial support to small-and-medium-sized enterprises. The JBF is helping this farmer and other small entrepreneurs add value to their products based on global market demand by using the market know-how of established anchor firms already engaged in export sales.

Since 2013, Campbell's scotch bonnet peppers have been a major component of pepper mash produced by Grace Agro Processors Division and sold to local and international pepper sauce manufacturers.

Campbell said he greatly appreciates having the technical support provided by GK's agronomy experts and a ready market for his peppers.

With the produce from Campbell and other contracted farmers, GK Foods has expanded its domestic and export markets for pepper mash. This has helped them strengthen the links between local producers and international markets, large hotels and the tourism industry, which is critical for the growth of the Jamaican economy.

It has not all been smooth sailing, however. Extreme weather events, including unprecedented torrential rainfall, resulted in flooding and losses at the farm, reducing the overall production.

Undaunted, Campbell and GK were able to rapidly respond and flexibly repurpose the $1.5-million grant (US$300,000) from the JBF, financed by the World Bank loan, to obtain post-flooding production needs, and Campbell is now back in the field with new plants.

The grant, he said, made him sigh with relief, as he looked at his colourful and beautiful peppers.