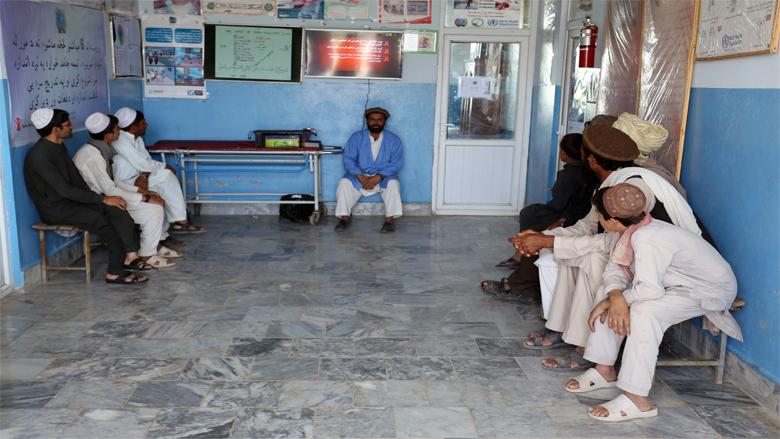 As a result of awareness raising campaigns under the SEHAT program, villagers are more aware of health issues and visit their health center in Tanai district of southesatern Khost Province. The Daragi Health Center in the district now serves 25,000 people.

TANAI DISTRICT, Khost Province – A short clip about vaccinations is playing on the TV of the waiting hall. All eyes are locked on the screen. A young girl talks about the importance of vaccination in early childhood. She directly encourages people to bring their children to the nearest health center for vaccination.

Alif, 60, is sitting in the tiny waiting hall of the Dargai Comprehensive Health Center (CHC) for a routine vaccination visit. Next to him is his grandson, 4, whom Alif has brought for a vaccination. They are not alone in the hall, a group of more than 20 people are also there, watching the health awareness clips and making small talk.

Alif lives in Khost Province, in southeast Afghanistan. Eight years ago, people of the district were very conservative when it came to health matters. Alif remembers the time when his brother died of appendicitis because they didn’t take him to a health center. “In the past, when a person had an illness in the village, people thought it was infectious and denied treating them normally,” he says. “It was hard, especially for those who had tuberculosis, because people used to believe that it did not have a cure.”

Today, residents in Tanai district are more informed about health matters. Dargai CHC holds public health awareness campaigns regularly, carried out by 24 Community Health Workers (CHW). In addition to the campaigns, doctors in the health center engage in public awareness. The TV in the waiting hall is another source of information. “We are very lucky that our doctors have a good understanding of our culture and traditions. They understand us well and deliver the services efficiently,” remarks Alif as he prepares to take his grandson into the vaccination department.

"Now there is not a single woman in our village who hasn’t come to the health center and we are really happy with the services at the Dargai Health Center."
Almarah
resident, Tanai district 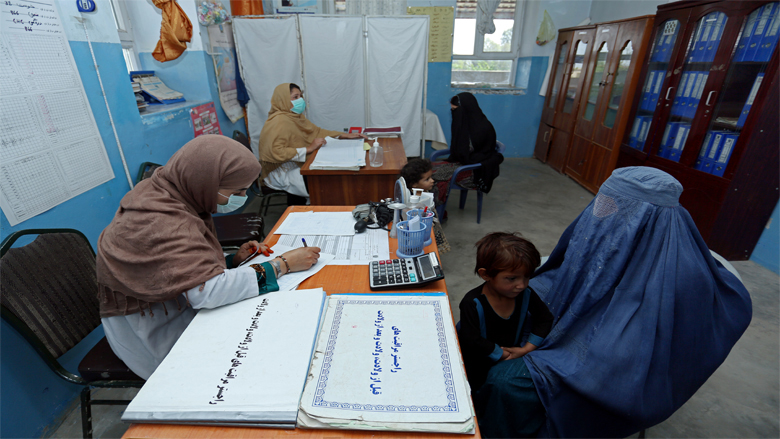 SEHAT aims to expand the scope, quality, and coverage of health services provided to the population, particularly for the poorn across Afghanistan.

Dargai CHC is one of 30 health centers in Khost Province that deliver a Basic Package of Health Services under the System Enhancement for Health Action in Transition (SEHAT) Program, implemented by the Ministry of Public Health (MoPH).

The clinic was established more than 20 years ago, as a small health center. Today, it has upgraded to a CHC with 21 employees, including doctors, midwives, nurses, and other support staff, serve 25,000 people in Tanai district. It receives 150 patients per day on average. “People walk long distances to reach the health center, because they trust us now” says Dr. Pacha who has worked in the center for more than 20 years. “Their well-being is improving day by day.”

SEHAT aims to expand the scope, quality, and coverage of health services provided to the population, particularly for the poor. It is supported by the International Development Association (IDA), the World Bank Group’s fund for the poorest countries, and the Afghanistan Reconstruction Trust Fund (ARTF), in partnership with multiple donors.

Health services at the CHC is provided by the Organization for Health Promotion and Management (OHPM), a nongovernmental organization (NGO), which has been contracted by MoPH. The contract is one of several performance-based partnership agreements between MoPH and NGOs to deliver defined packages of basic health services and essential hospital services under the SEHAT Program.