Sometimes change comes so quickly it takes time to get to grips with it. One such change is now beginning to take hold in India.

Endowed with more than 300 days of sunshine a year, India is making strides towards becoming a global solar superpower. Since 2009, when the country first launched the National Solar Mission, it has installed solar parks on large tracts of unused land across the country.

“But solar parks need land, and land is scarce in a densely-populated country,” explained Simon Stolp, lead energy specialist at the World Bank in Delhi.

“Rooftops, on the other hand, hold huge potential.”

Today, thanks to a new partnership between the World Bank and the State Bank of India (SBI), India’s largest bank, the market for rooftop solar has also begun to take off.

“Tapping the rooftop solar market will be essential for India to meet its massive energy needs,” said Stolp. “The country has a lot of catching up to do - its per capita consumption of electricity is less than one third the world average.”

To meet these energy needs, India has set itself the ambitious target of generating 100 GW of solar energy by 2022, forty percent of which is to come from rooftop solar.

"Tapping the rooftop solar market will be essential for India to meet its massive energy needs. The country has a lot of catching up to do - its per capita consumption of electricity is less than one third the world average."
Simon Stolp
Lead energy specialist at the World Bank in Delhi 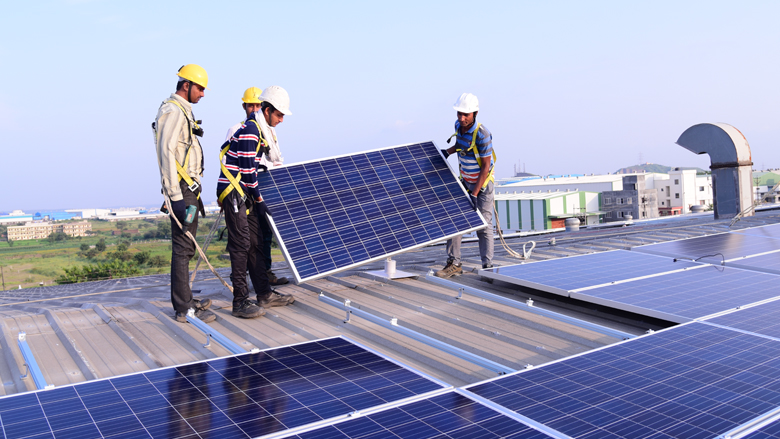 Until now, however, it was difficult to breakthrough into the rooftop solar market. Although the business case was strong, and the costs of solar panels were falling dramatically, financing was difficult to come by.

In solar plants, the largest capital investment goes toward the installation of solar panels, and must be made upfront. At today’s prices, this amounts to an investment of about Rs. 5 crores (approx. $ 760,000) to produce one megawatt of power. “But banks had no models for such new forms of lending,”explained Stolp. “And even where financing was available, the costs were just too high.”

Things have now begun to turn around very quickly. Since June 2017, when the World Bank announced a $625 million loan to SBI to provide discounted finance for rooftop solar installations on factories and institutions, market response has been overwhelming.

One of SBI’s first borrowers was Amplus Energy Solutions, a private renewable energy developer, and an early mover in the field. “World Bank-SBI financing has enabled us to borrow at 8.25 percent – down from 12 percent before,” explained Sanjeev Aggarwal, MD of Amplus. “This has helped us lower the cost of solar energy we provide our customers.”

Today, Amplus has around 250 megawatts of solar plants – either installed or under construction - serving more than 70 customers across 20 states of India.

One of Amplus’s first customers was the India Yamaha Motor plant in the Noida industrial belt, across the river from Delhi. The motorcycle manufacturer first began installing solar panels on its Noida rooftops in 2016 to comply with the company’s global energy policy.

Today, Yamaha’s Noida facility is one of the largest manufacturing plants in India with a ‘captive’ solar rooftop facility of more than 20,000 solar panels which generate 6.3 MW of power.

The sea of solar panels on Yamaha’s rooftop is owned by the developer. “We buy clean solar power from Amplus at Rs.6 per unit - compared to Rs. 8.5 per unit from our usual energy provider,” explained Sanjiv Paul, senior vice president at Yamaha Motor India.

“This has reduced our power costs by 20-25 percent.”  During peak times, solar power meets a fifth of the Yamaha facility’s energy needs and, on holidays, the energy is fed back into the grid, creating an energy credit that the company can draw upon later.

The change is now beginning to catch on. While large multinational companies have begun to blaze the trail, others are lining up to follow.

“Until now, it’s been a hard sell, because changing mindsets takes time,” said Amplus’s  Aggarwal, “But now I think the market is ready to take off.There may be blips in between, but I expect that in 3-5 years time the cost of rooftop solar power will fall to Rs. 2 to Rs. 3 per unit.”

“After all,” Aggarwal adds, “This is the first time in history that every person can generate her own clean renewable electricity – be it the smallest tea shop or the largest factory or institution.”

With strong sunshine beating down on rooftops across most of this tropical country, the future of solar power in India is bright indeed.