Cities in Eastern Europe and Central Asia: A Story of Urban Growth and Decline 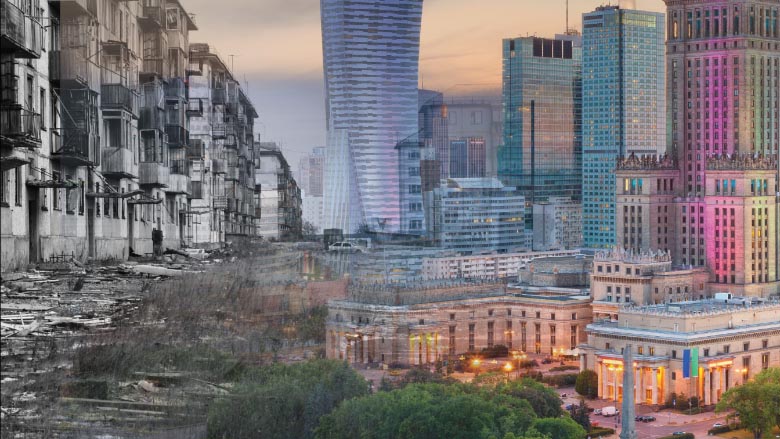 A composite image of urban areas in Eastern Europe

The urbanization experience of countries across Eastern Europe and Central Asia is quite unique, and for several reasons. To begin with, most of these countries attained high-urbanization levels under a centrally-planned system, in which non-economic factors were pivotal in shaping the spatial distribution of both the population and economic activities.

By 1989, close to 64% of the population in the region lived in urban areas. Cities were founded in remote areas and often created and consolidated around a single industry. While more than 25 years have passed since the fall of the Soviet Union, the central-planning legacy is likely to continue influencing the trajectory of urban areas in the region for decades to come.

Today, urbanization in Eastern European and Central Asian countries is also profoundly affected by demographic transition. Having experienced more than two decades of fertility rates below replacement levels, and currently suffering from negative net-migration rates, many countries in the region are experiencing an overall decline of their population. Compared to the rest of the world, countries in the region have much lower population growth rates, and are among the only countries experiencing both a decline of their total population and of their urban population.

With a smaller labor force available, cities across Eastern Europe and Central Asia are increasingly competing against each other to attract scarce human capital. On one hand, the region’s cities are facing population decline in unprecedented numbers and scale: between 2000 and 2010, 61% of the cities in the region were declining, losing on average 11% of their population. On the other hand, population growth is increasingly concentrated in a fewer number of cities.

Spatial GINI coefficients – which measure the degree of concentration of the population across cities in each country – increased in all but 4 out of 17 countries studied over the period 2000-2010.

Share of cities in the region growing/declining in population between 2000 and 2010.

Across the region, Central Asian countries, as well as Poland and Turkey, appear to be less affected by city population decline, whereas countries like Bulgaria, Albania, and Romania are seeing more than 80% of their cities declining. The rate at which cities are growing or declining also varies substantially within countries, with some presenting distinct spatial patterns.

In Ukraine, for instance, data (collected prior to the ongoing crisis) indicates that most of the cities in the eastern part of the country were declining, which contrasts with the growing trends observed in cities on the western side of the country. 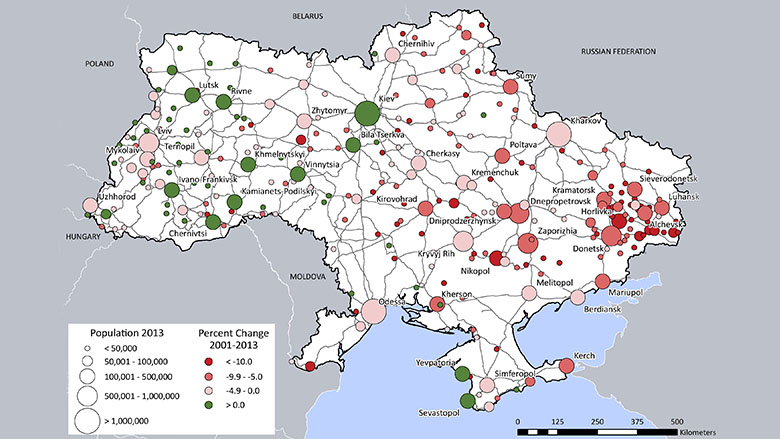 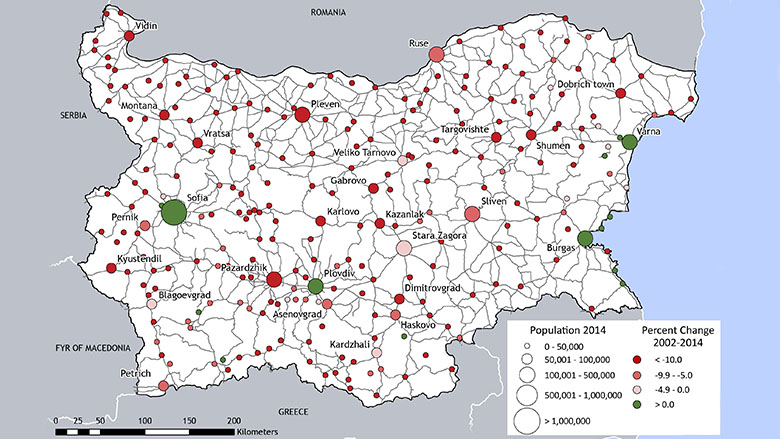 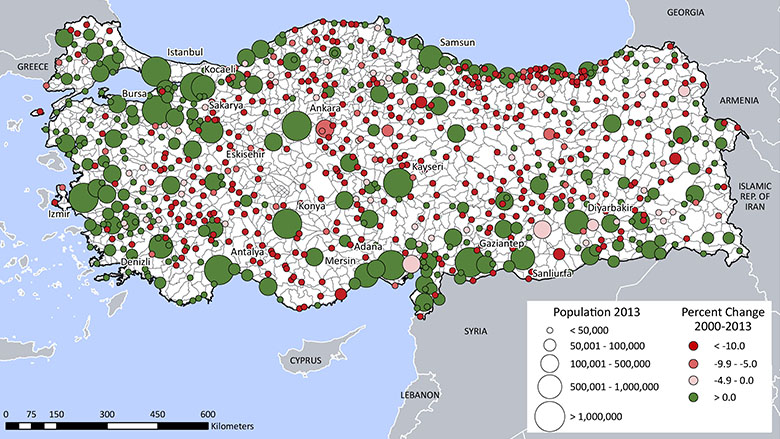 Which Cities are Growing and Which Are Declining?

Data for more than 5,000 cities across Eastern Europe and Central Asia indicates that bigger cities tend to grow more (or decline less) than smaller cities. Capital cities and secondary cities also appear to have an advantage in attracting populations. The degree of economic specialization matters also, with cities that are dominated by one industry or economic sector (often called monotowns) growing much less (or declining much more) than their peers.

Location also matters. Being close to the coast or having a milder winter positively impacts city population growth. However, being closer to other, larger, cities can be detrimental to a city’s ability to attract a population, particularly when located in regions and countries undergoing demographic decline.

Both growing and declining cities face uniquely challenging environments. Growing cities need to adapt their local infrastructure to ensure that the growing population is well-absorbed and integrated into the city, while avoiding urban sprawl and balancing urban growth beyond administrative boundaries (an increasingly common phenomenon in the region).

In many of the region’s growing cities, the population is moving from city centers – which are at times shrinking - towards suburbs. This suggest that there are issues with housing provision and/or inefficient land-use in those city centers that need to be addressed.

City population decline has important policy implications at both the national and local level. Decline can often lead to fiscal imbalances, as the revenue base of cities is eroded, while the per capita cost of providing services increases. In addition, given the durable character of housing, decline can lead to housing vacancies, declining housing prices, and urban blight.

While many declining cities across Eastern Europe and Central Asia continue to focus their policy efforts on attracting a growing population, they should instead shift their efforts to better manage their population decline. Shrinking cities are not a new phenomenon, but the region is at an unexplored frontier – which poses both challenges and opportunities for countries as they manage urban development in the years ahead.

“Cities in Eastern Europe and Central Asia: A Story of Urban Growth and Decline” is a report developed under the framework of the Global Research Program on Spatial Development of Cities, initiated by the World Bank and the United Kingdom’s Department for International Development (DFID) Growth Research team in 2014.