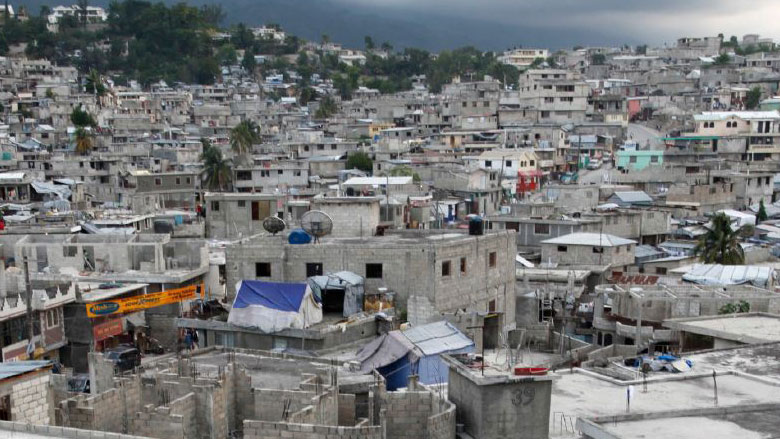 Securing access to financial resources before a disaster strikes through sovereign catastrophe risk pools allows countries to respond quickly to disasters and reduce their impact on people and their livelihoods.

In the aftermath of Hurricanes Irma and Maria this past September, CCRIF SPC provided $29.6 million in payouts in less than 15 days to six Caribbean countries: Antigua & Barbuda, Anguilla, Haiti, Saint Kitts & Nevis, The Bahamas, and Turks & Caicos Islands, while in Dominica, the CCRIF SPC along with an existing World Bank disaster reduction project, made a $19 million payout.

Likewise, in 2015, just seven days after Cyclone Pam devastated Vanuatu -- leaving one-third of the island’s population homeless and causing damages equivalent to more than 60% of the GDP -- the government received a $2 million payout from the insurance policy it had purchased through PCRAFI. While $2 million may not be a large amount of money, it was eight times the government’s emergency provision and was critical for funding urgent priorities, such as flying medical personnel to the worst affected areas.

Through sovereign catastrophe risk pools, countries can pool risks in a diversified portfolio, retain some of the risk through joint reserves and capital, and transfer excess risk to the reinsurance and capital markets.

Since it is highly unlikely that several countries will be hit by a major disaster within the same year, the diversification among participating countries creates a more stable and less capital-intensive portfolio, which is cheaper to reinsure.

By putting a price tag on risk, sovereign catastrophe risk pools can also create incentives for countries to invest in risk reduction.

This is important because donor assistance is struggling to meet the rising cost of disasters, and insurance coverage remains low in vulnerable countries. At the same time, disaster losses are on the rise,  with climate-hazards increasing in frequency and intensity, and more people and assets in harm’s way.

Already the impact of natural disasters is equivalent to a $520 billion loss in annual consumption, and forces some 26 million people into poverty each year.

In the last 10 years, 26 countries in three regions—Africa, the Pacific, and the Caribbean and Central America—have joined three sovereign catastrophe risk pools, thanks in part to contributions from donors, who provided technical and financial resources to support them. They have purchased parametric catastrophe risk insurance for an aggregate coverrage of $870 million and an aggregate premium volume of $56.6. million, backed by more than 30 reinsurance companies. The three pools have made $105 million in payouts to date.

Reviewing this experience, a new report prepared by the World Bank and Global Facility for Disaster Reduction and Recovery (GFDRR) shows that catastrophe risk pools can play an important role in moving the management of disaster and climate shocks away from ad hoc humanitarian assistance toward planned development. The report, Sovereign Catastrophe Risk Pools: A World Bank Technical Contribution to the G20, makes the case for stronger cooperation between G20 countries and developing countries on disaster and climate risk financing and insurance. The report was instrumental to the G20 endorsement of the new Global Partnership for Climate and Disaster Risk Finance and Insurance Solutions which will be launched at COP23.

Ultimately, risk pools are only one element of an effective approach to risk management. To reduce the impact of disasters on people, livelihoods and national budgets, governments should consider ways to identify and reduce the underlying drivers of risk. Risk pools, along with other disaster risk finance and insurance solutions, complement risk reduction by helping governments address those risks that can’t be mitigated. They also help move risk management toward a proactive approach focused on planning financial responses in advance, rather than relying on fundraising efforts in the aftermath of disasters. 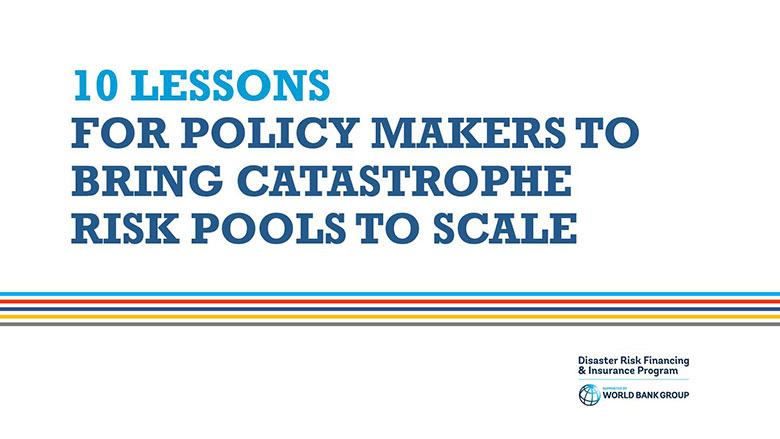 Policy makers should keep in mind the following 10 lessons to reap the benefits of risk pools.

2.       Pools often rely on strong donor support. Donors have a key role to play in supporting the development of risk pools with financial and technical resources, and in reducing reliance on unpredictable post-disaster humanitarian assistance.

3.       Pools can strengthen disaster preparedness and crisis response. Policy makers need to be ready to manage the impacts of residual risks through pre-agreed post-disaster plans, backed by pre-planned financing.

4.       Pools can foster policy dialogue on risk management and risk ownership. They offer a vehicle to anchor financial planning; contingency planning; ownership of and collaboration on the climate risk management agenda between and within countries; and risk-informed investments.

6.       Pools can create public goods. Risk pools can drive improved insurance literacy, increased institutional capacity, and the availability of disaster risk data and modeling. For example, the Pacific Risk Information System (a platform that includes an exposure database of over 4 million assets in the region) and its associated catastrophe risk model have been used by domestic insurers and brokers to inform their underwriting and pricing decisions. In Fiji for example, the model was used to inform the provision of catastrophe risk insurance for hotels and resorts.

7.       Pools can offer cost-effective insurance solutions. By helping countries develop standard products based on their respective needs, and structuring a portfolio of diversified country risks, risk pools offer larger transaction sizes that are more attractive to global reinsurance and capital markets. Additionally, risk pools can reduce premiums by reducing the cost of capital, operating costs, and the cost of risk information.

8.       Pools should be part of a comprehensive financial protection strategy. The parametric insurance products offered by risk pools provide rapid (but limited) liquidity in the immediate aftermath of infrequent and severe disasters. Other financial instruments, such as contingency funds and contingent loans, can be used to finance recovery and reconstruction efforts, as well as the cost of more frequent disasters. Governments can strengthen financial resilience by combining financial instruments that address different needs and have different cost implications.

9.       Pools require up-front payment of an insurance premium, facilitating a shift toward proactive risk management. Participating countries have to pay upfront an insurance premium that reflects their actual risk exposure in exchange for the insurance coverage, thereby shifting payments to take  place in predictable installments before disaster strikes. It may be challenging for countries that previously relied on donor support to start paying an insurance premium for disaster risks with national resources. However, moving in this direction, even partially, can provide the right incentives for proactive planning and risk-informed investments in risk reduction.

10.   Pools can be sustainable only with more formal and predictable approaches to premium financing. Policy makers tend to see allocating budget for the payment of premiums as not generally a permanent part of budgetary processes. This is when concessional insurance through targeted premium subsidies or concessional loans can be useful. Concessional insurance can help countries secure premium financing for several years while they progressively include premiums as an item in their national budget.