A Call to Act and Invest for the Future 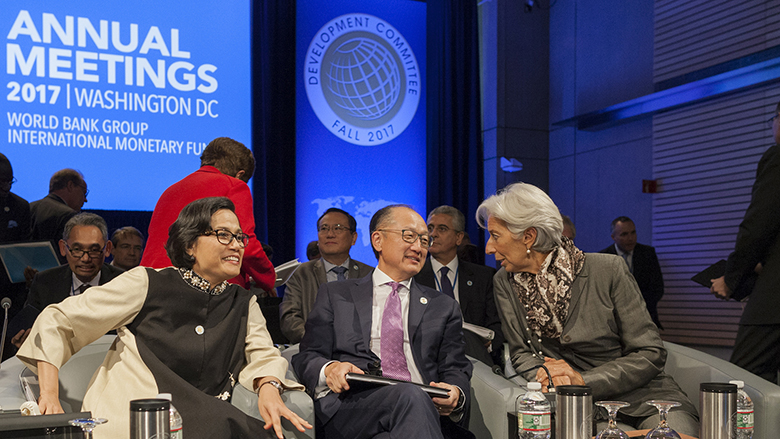 Global growth has strengthened over the past year, with a recovery in investment, trade, and commodity prices amid supportive global financial conditions. Still, downside risks remain, and prospects for growth vary widely across countries. The World Bank Group is uniquely positioned to help developing countries address the complex challenges that can threaten their gains in an increasingly interconnected global economy.

This was a key message from the Development Committee, a ministerial-level forum of the World Bank Group and the International Monetary Fund, in a communiqué issued at the close of the institutions’ Annual Meetings in Washington.

The committee, which represents 189 member countries, reiterated its support for the Bank Group’s role as an effective and accountable leader in the global development arena, with a strong track record of supporting countries’ long-term development ambitions. The committee urged the Bank Group to enhance coordination and partnership across international financial institutions in leveraging the financing needed to achieve sustainable and inclusive growth, enhance human capital, and strengthen resilience.

World Bank Group President Jim Yong Kim addressed these priorities in his opening speech at the beginning of the meetings. He noted that the upturn in the global economy has made it “an especially important time for tackling global poverty, because we have more room to take bold action to grow the economy, protect countries from major overlapping crises, and invest in people.”

The committee’s communiqué and Kim’s speech emphasized the Bank Group’s efforts to maximize finance for development, while helping ensure that public and private investments are complementary. Based on shared principles agreed on at the recent G20 summit, the Bank Group and other multilateral development banks will help countries scale up their development resources by drawing appropriately on private sector solutions where these can boost growth for the poorest and most vulnerable. For the Bank Group, this includes an effort that brings together IDA, IFC, and MIGA to mobilize private investment and create markets in the most challenging environments.

The committee embraced the Bank Group’s emphasis on human capital, noting that systematic approaches to health, nutrition, education, and social protection create the foundations for long-term development. The communiqué cited the focus on education in the newly released World Development Report and efforts to close gender gaps in women’s access to property, finance, and jobs, including through the Women Entrepreneurs Finance Initiative, which launched during the Annual Meetings.  In his speech, Kim also announced the Human Capital Project, an accelerated effort to help countries invest more, and more effectively, in their people.

The communiqué noted the Bank Group’s leading role in global efforts to strengthen resilience to crises and macroeconomic shocks. Kim’s speech highlighted key initiatives to address the challenges of climate change, refugees and forced displacement, and pandemics. For its part, the committee noted that cyclical shocks place pressure on vulnerable financial systems. It called on the Bank Group and the IMF to help countries strengthen domestic resource mobilization, reduce illicit financial flows, and create instruments to help prepare and recover from crises and disasters.

In his speech, Kim called for more resources for the Bank Group, remarking that, “With enormous development needs and rising aspirations, demand is overwhelming.” He stated that the Bank Group institutions have provided exceptional value for money over the decades, but that global goals and countries’ development ambitions now require financing on an unprecedented scale. The committee has asked the Bank Group’s Board and management to review all measures to enhance the Bank Group’s financial capacity and to identify options in the months ahead.