The Cities of the Future in Latin America: Fewer Cars, Fewer Youth 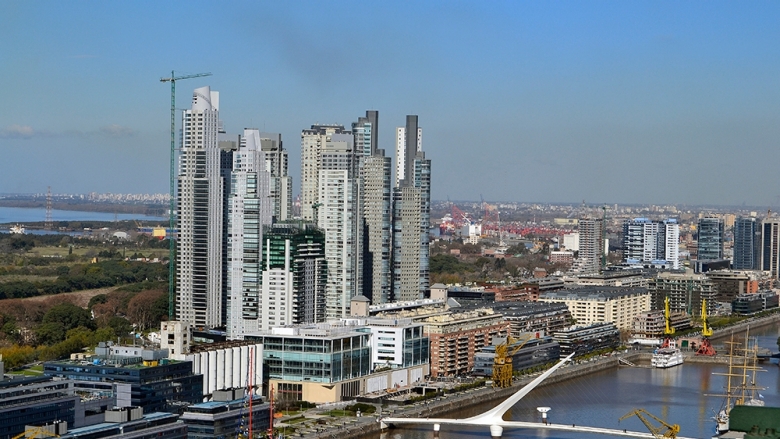 Growth within the city limits, planning with greater equity and resolving violence are key for achieving the Sustainable Development Goals

When the pilot announces from the cockpit that the plane has begun its descent into Buenos Aires, the passengers look out the window as they prepare for landing. For several minutes, the Argentine capital looks from the air like endless rows of dwelling, tall buildings, highways and large construction projects. The same scene occurs in Bogota, Sao Paulo, Lima and Mexico City.

Welcome to the great metropolises of Latin America in the 21st Century.

In the most urbanized region in the world, the challenges for achieving the Sustainable Development Goals (SDG) are magnified. Despite the disordered growth seen currently, advances are being made. We spoke with Horacio Terraza, a World Bank expert in urban development and cities, about how Latin American cities are doing in terms of becoming more sustainable and safeguarding the planet’s increasingly stressed resources.

Question: How much have Latin American cities advanced toward the SDG?

Response: At nearly two years since the SDG went into effect, the most important advance we have made is the adoption of a paradigm shift in the vision of cities, which is evident in most of the countries of the region. This paradigm shift is obvious in terms of policies, of the prioritization of investment and the introduction of city planning. With respect to investment policies, the city occupies a privileged place on the agendas of governments, regardless of their political orientation. Why? Because the city is no longer perceived as a decadent space, the (almost Biblical) origin of human deprivation. It has become an opportunity for sustainable development, well-being and equality to take shape. This change in attitude is mainly based on an undeniable reality: urbanization on a global scale is irreversible. Today, over half the population lives in urban areas; by 2050, this figure will increase to 75%, following in the footsteps of a voracious Latin America, which increased from 40% 65 years ago to 80% today. Second, investment will have greater impact if it is concentrated in urban areas where in addition to the application of economies of scale and economic clusters, they will be the driver of economic growth of the countries (they generate 80% of global GDP) and will concentrate the best resources – human beings.

The shift in addressing the urban problem is no less relevant. The proposal abandons the sectorialist vision of the urban to adopt an integrated, multisector view that prioritizes equality and focuses on human beings and human scale. It also attempts to incorporate disaster risk management as a regular planning component.  I believe it is a concept that precedes the SDG 11: its virtue lies in having recognized and incorporated a demand and a need. Today this vision is accepted in most urban and economic planning agencies of national and sub-national governments with large populations.

Q: Despite the advances, the disordered growth of Latin American cities represents a major obstacle to achieving the SDG. What is being done?

R: For the past 60 years, we have lived in a region where the growth of urban infrastructure has fallen far short of the population growth and physical expansion of cities. In Latin America, approximately 25% of the population lives in informal settlements. By 2020, 160 million people are expected to live in those settlements. Currently, it is estimated that 75% of housing built annually in the region is informal, which means that these dwellings lack property titles and access to basic infrastructure and services.  To further complicate matters, these settlements are generally built in the only available space in the cities: that at greatest risk in disasters (flooding, landslides, etc.), where increased social vulnerability and poverty are on display.  The quantitative housing deficit (number of families without housing) is nearly 37% in Latin America. Only approximately 20% of wastewater discharge is treated and just 50% of solid wastes are disposed of appropriately. To complete this scenario, Latin America is the most violent region in the world,  with an average of 24 homicides for every 100,000 inhabitants, more than double the world average, with cities that have up to 90 homicides for every 100,000 inhabitants.

Although these numbers are regional averages with local variations, they give a clear idea of the historic debt that is irreversible in the short term. Reverting it and planning current growth to avoid it in the future is the major challenge. As I mentioned earlier, most governments in the region are prioritizing investment in urban infrastructure for the most socially  vulnerable.  Programs such as “Mina Casa Minha Vida” in Brazil, “Quiero a mi Barrio” in Chile or the “Programa de Mejoramiento de Barrios” in Argentina have had and have a decisive impact in reducing the deficit. They have become policies and this process is indeed irreversible. I also mentioned that a second generation of this type of projects exists:  the idea is not only to provide infrastructure and housing. These projects also want to “build cities,” developing a social fabric with a more equitable quality of life and that transform the informal into the formal. This is where the opportunity becomes clear. These new developments recover the tradition of Latin American cities where quality public spaces again become a priority. To encourage most trips to be made on foot or on public transport  (the construction of new metros in Panama City, Lima and Quito are examples of the strong investment in the latter).  Public transport should be linked to the urban design of the neighborhood, land use should be mixed and high-density. This is what the cities are doing and I believe the best is yet to come.

Q: How can we prepare Latin American cities for the new influx of people that will live in cities in 2050?

R: We should remember that Latin America is already the world’s most highly urbanized region at over 80%. Unlike Asia and Africa, the region’s large cities will no longer be growing in 2050. Mexico City will reach its peak in that year, and many others will have begun to decrease. Santiago de Chile will reach its maximum population in 2041. Current extreme examples include cities such as San Juan de Puerto Rico, whose population reached its peak in 2012. Only relatively young cities such as Manaus or those of recent economic growth, such as Panama City, will continue to have high growth patterns at that time, reaching their maximum population between 2070-2080.  Accordingly, the region’s cities face a major challenge during the next 15 years, during which time they will continue to grow, but at a slower pace: that of trying to grow within current city limits by increasing their density. Halting uncontrolled, low-density expansion is a priority. The vast majority of Latin American cities can do so; the only obstacle is the capacity of city halls to plan and apply standards and regulations. In the past, the region has been ineffective in that area.

Q: How do you imagine Latin American cities in 2050? What will their main contributions be? What about their challenges?

R: I imagine a city quite distinct from the prevailing public perception. It will not be a city of The Jetsons. I hope it will be one of common sense and equality. And to give a framework, I imagine three decisive factors that will shape it physically and socially: