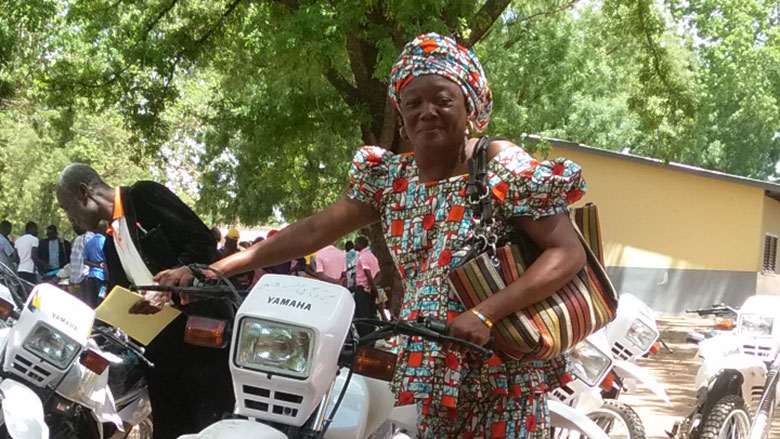 In total, the project distributed 465,751 textbooks, 10,000 teacher's guides, 243 tablet computers and 105 motorbikes made available to pedagogical planners and inspectors.

N'DJAMENA, September 1, 2017- "I am finally like the other students, like those in the city, because I have received textbooks, I can sit on benches and write on a table. Our school is nice and well-equipped," Benoît Chiang, a sixth grade student at Mangadougou Elementary School in the Tandjilé-Est department says proudly. Here, as in six other regions of the country (Mayo Kebbi Est, Mayo Kebbi Ouest, Mandoul, Tandjilé, HadjerLamis, and N'Djamena), the school year ended in splendor and classrooms are now just as contemporary as those in modern schools.

The uncomfortable hours spent in class—sitting on the ground and taking notes as best one can in clumsy handwriting, notebook propped up on the knees—have come to an end. New classrooms that have been built to last and brand-new toilets, water fountains, and school equipment and materials offer a more serene and effective learning environment. Things that seem insignificant to those who own them, but that change the daily lives of those who were deprived of them until now. "Now everyone is clean and we are studying well because we are no longer sitting on the floor, on bricks or pieces of wood," notes Edouard Pina, a fourth grader. 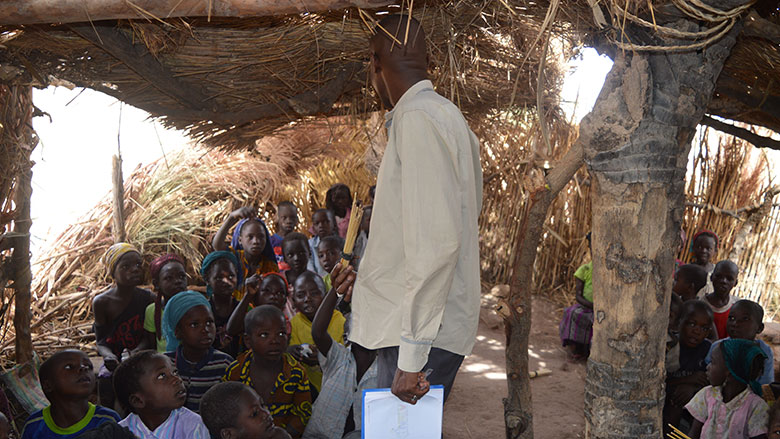 Before the school renovation, classes were held in straw sheds, where teachers and students were constantly bothered by the wind and rain. Photo: Edmond Dingamhoudou, World Bank 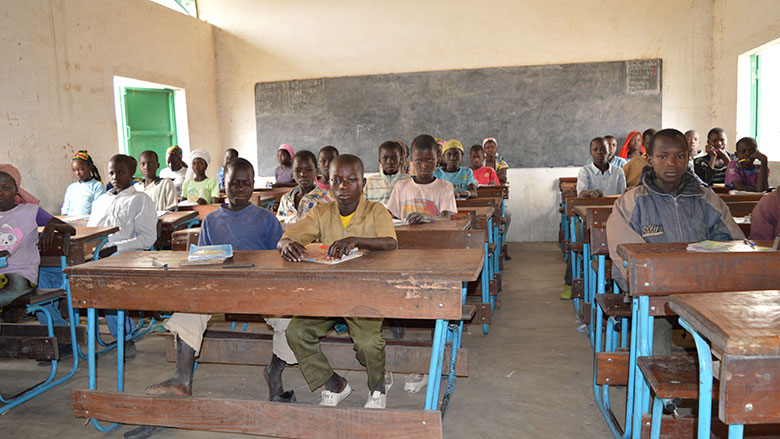 In total, these works rehabilitated 10 classrooms and build 70 others, and equip them with 1,260 school bench desks. The works also provided the school with 132 toilet stalls and 5 water borehole wells. Photo: Edmond Dingamhoudou, World Bank

A sound mind in a healthy environment

In a country in which half of the children of primary school age are excluded from the system owing to a shortage of classes or for economic reasons—the most fortunate children rarely spend more than 6.9 years on average in school and the poorest barely over a year—these improvements, funded by the Chad Education Sector Reform Support Project Phase 2 (PARSET2), aim, among other things, to increase student attendance. "The students who used to sit on the floor are now comfortably seated; this should motivate them more and significantly improve their writing.  It is a very important skill that could not be properly taught until now," states Laba Jasé, a primary education pedagogical inspector in Bongor Rural Sud.

"I am sure that in the coming school year, people will be scrambling to register their children because we have buildings that are out of this world, and all the children will want to study in these buildings," predicts Heleng Galzana Kaka, president of the school's parents association.

In total, these works rehabilitated 10 classrooms and built 70 others, and equiped them with 1,260 school bench desks. The works also provided the school with 132 toilet stalls and five water borehole wells. This sound infrastructure will resist rains and tough weather conditions, which delayed the start of the school year or called a halt to classes before the end of the school year.

Chad, whose economy was severely impacted by the fall in oil prices, invested only 2.9% of its GDP in education in 2015—a figure well below the average of 4.5% in sub-Saharan Africa—and education spending declined 16% between 2016 and 2017. It is for this reason that parents' associations play a very important role and attempt to pick up the slack. "I can't say enough about how much this project has renewed our motivation at a time when we were all demoralized," asserts Joseph Nagesh, President of the Sateignan parents' association, recalling "the straw sheds, where teachers and students were constantly bothered by the wind and rain."

A small digital and pedagogical revolution

"In total, we printed and distributed 465,751 textbooks, 10,000 teacher's guides, and 10,000 textbook management guides in four regions covered by the project. Added to that are 243 tablet computers and 105 motorbikes made available to pedagogical planners and inspectors working in these regions," explains the project coordinator, Adam Mahamat Al boukari Barka. "These bikes will greatly help them coordinate activities and pedagogical monitoring in these regions, which lack public transport."

It's a small revolution in the approach to studying and teaching as well. For some, it was the first time they touched a keyboard or a tablet. "In our department, we can now provide one reading textbook and one mathematics textbook per student," notes Ahmat Oudanour, the regional delegate for education and civic promotion for the Mandoul region.

A short time ago, problems related to the non-payment of community teachers could have seriously degraded the quality of primary education since they account for 60 percent of teachers. The World Bank recently provided additional funding of US$50 million to help fund community teacher subsidies. "The establishment of this fund will facilitate the provision of subsidies for some 11,680 community teachers over a specific period and robust training for some 9,000 teachers who are working without having received adequate training," says Waly Wane, World Bank Task Team Leader.

The aim of this approach is to "create a more stable school environment for 1.5 million students, and to improve the quality of education by motivating teachers and students in Chad through sound training and a more conducive framework for learning."