Argentina – Turning the Corner on the Path to Shared Prosperity 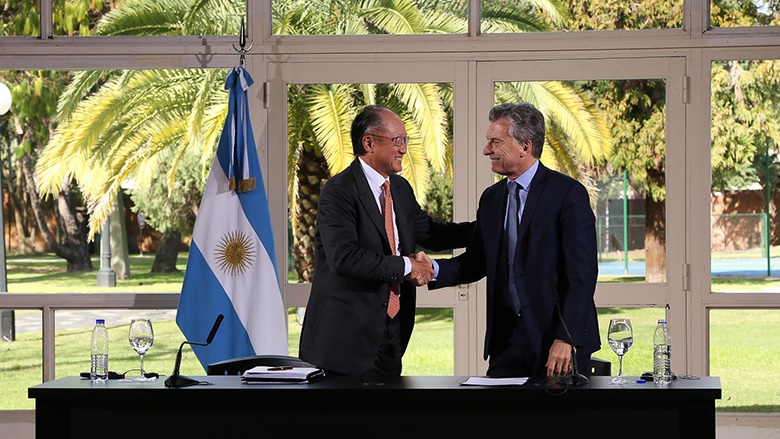 When World Bank Group President Jim Yong Kim landed in Buenos Aires in August, he brought an unequivocal message: Argentina is taking the difficult steps needed to lay the groundwork for a brighter future, and the World Bank Group stands ready to continue supporting Argentina to live up to its enormous potential.

“We need openness and trade between countries for the transfer of knowledge and cutting-edge technology, ,” Kim said during a press conference with President Macri.  “We also need to focus on enabling the conditions that favor stable markets, which in turn attract investment and create employment. I’m pleased and enthusiastic to see that Argentina is on this path.”

The two-day trip was the first visit by a World Bank President to Argentina in 25 years, and included a whirlwind of meetings with government, business and thought leaders, and the press. Kim met with President Mauricio Macri to discuss the reforms implemented by the government, further engagement in the global economy, the upcoming World Trade Organization (WTO) Ministerial Conference in Buenos Aires in December, and Argentina’s Presidency of the G20 next year.

Kim announced up to US$2 billion in new financing from the World Bank Group to Argentina over the coming year. Half of that will be for the public sector and the other half for private sector companies, as the World Bank Group continues to leverage public and private funds for infrastructure and other development investment. The institution is already working with Argentina in key areas including renewable energy, agriculture, poverty reduction, human development, the environment, infrastructure, and private sector development.

Argentina’s choice of openness and integration over isolation has put the country on a promising path, Kim said in Spanish during a press conference with President Macri. Kim explained that he learned his Spanish as a young doctor treating drug-resistant tuberculosis in Peruvian slums – an experience that cemented his concern for the poor in South America.

A key message Kim emphasized throughout the trip was the enormous potential to tap private capital to fund infrastructure and other development. He highlighted the example of the $480 million guarantee that the World Bank provide for the renewable energy sector in Argentina, which has helped mobilize over $3 billion in prospective private-sector investment. IFC also mobilized over $1 billion in private sector investment in renewable energy in the country.

Kim joined Minister of Science, Technology, and Productive Innovation Lino Barañao at a forum on investing in the Future of Work, which tackled the complicated issue of technological change and how best to prepare people for the jobs of the future. Over 500 opinion leaders, entrepreneurs, and students gathered to consider this issue, which is attracting so much attention worldwide at this moment.

The blistering pace of technological change is affecting every country in the world, Kim said – with information and communications technologies, robotics, and artificial intelligence posing a significant challenge, as well as a big opportunity. Automation will eliminate many of the less complex and low-skilled jobs, and the remaining jobs will demand new and more sophisticated skills. In the face of these accelerations, it’s crucial for all countries to invest early and effectively in their people, Kim said. It’s also critical for educators to work closely with the private sector to ensure that workers are being trained with the right skills for jobs that exist now and for the jobs of the future.

With its large pool of educated, creative professionals, Argentina is particularly well suited to face these challenges, Kim pointed out. The country has produced five Nobel Laureates and four of the six “Unicorn” companies in Latin America – start-ups that are valued at over 1 billion dollars: Globant, MercadoLibre, Despegar, and OLX. Among middle-income countries, Argentina ranks 5th in terms of innovation quality in the recent Global Innovation Index.

With more trips scheduled to Argentina over the next year for the G20 meetings, Kim will be paying close attention to the success and progress of the country’s reforms. He repeatedly emphasized the Bank’s commitment to supporting and assisting the country in every way possible along this path.

“Successful countries make sacrifices at difficult times to put themselves on the path to growth,” Kim said during an interview on the Argentinian television program, Animales Sueltos. “If Argentines are willing to make some sacrifices together, they will have prosperity. They need to undertake a series of reforms based on empirical evidence, not ideology. For Argentina, the sky is the limit.”