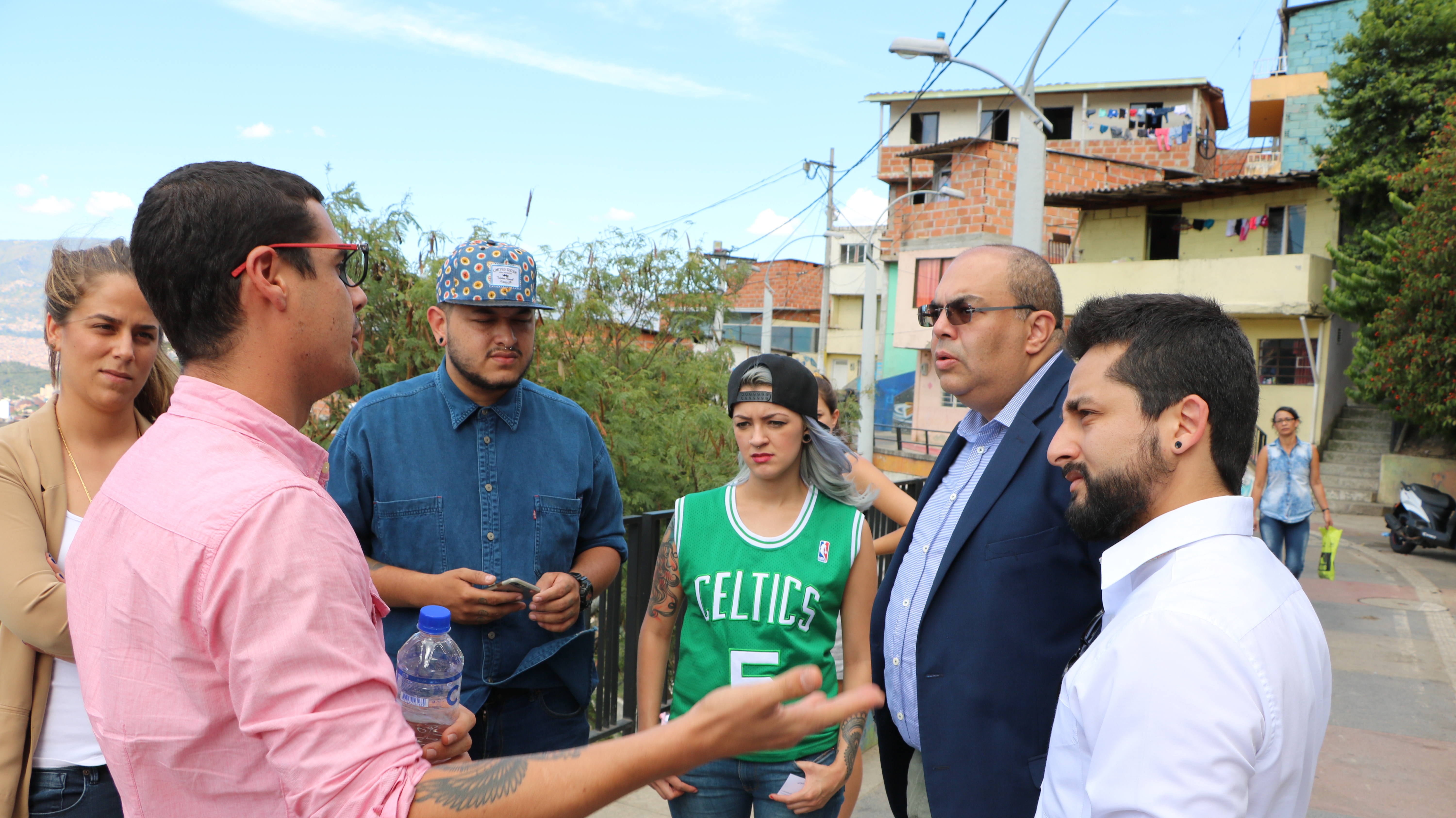 Youth from Medellin's Communa 13 talk with World Bank Group Senior VP Mahmoud Mohieldin about how their neighborhood has improved in recent years, and the importance of the SDGs to their future.

In the two years since leaders of 193 countries signed off on the SDGs, the United Nations, the World Bank Group and other development banks, regional groups, think tanks, and NGOs have held myriad meetings and published dozens of reports. But what has happened on the ground? Has anything changed?

Evidence from Colombia suggests that action is indeed taking place. According to Colombia’s Finance Minister Mauricio Cárdenas, the SDGs have provided focus and a political framework for challenging reforms, including the National Development Plan, implementation of the peace agreement, accession to the Organisation for Economic Co-operation and Development (OECD), and climate commitments under the Paris Climate Agreement.

Business leaders are integrating the SDGs into their work, too. The Bogota Chamber of Commerce is increasing awareness of the SDGs among its 640,000 members and providing training to build skills in areas that support the SDGs and increase competitiveness, according to the group’s president, Monica de Greiff. Small and large businesses in Medellin are integrating the SDGs into their business plans and supply chains in ways they hope will help consolidate gains of the peace process, promote local development, and create jobs while increasing their profits.

The Asociación Nacional de Empresarios de Colombia (ANDI), a Bogota-based business advocacy and think tank, is building awareness among industry leaders about the importance of keeping water resources clean and abundant. According to the group’s president, Bruce Mac Master, business leaders want to consolidate the gains of the peace process, especially in remote areas, which have traditionally been shut out of government services. They recognize that improving poor people’s lives—by investing in roads, health, and power, for example—can help reduce the core inequities that helped drive the conflict.

Municipalities and youth groups are also adopting the SDGs. Medellin’s Mayor Federico Gutiérrez empowered a youth department within the city to conduct extensive outreach to young people (who represent more than a quarter of the population) in order to reduce the risks of violence by improving school attendance, promoting public art, and providing support for training and employment, among other services. The youth department (and all city departments) benchmarks progress against SDG targets, regularly reporting on progress.

The World Bank Group’s program in Colombia acknowledges Colombia’s achievements in reaching a peace agreement and cutting the extreme poverty headcount in half between 2002 and 2016, to 8.5 percent. In 2014, for the first time, the share of middle class people (32 percent) in Colombia exceeded the share of the poor (28 percent).

Colombia’s Country Partnership Framework (jointly developed by Colombia and the World Bank Group) emphasizes three main areas of support: fostering balanced territorial development, enhancing social inclusion and mobility through improved service delivery, and supporting fiscal sustainability and productivity. Recognizing the historical importance of the peace process, the strategy also has a cross-cutting theme of peace building. Colombia is also in the final stages of OECD accession and the WBG is providing policy-based advice to support its application, with SDG targets integrated into this work.