ANDRIAMBILANY, August 2, 2017 – In spite of appearances, the piece of paper that Rakotoarimanana, 79 years of age, proudly clutches in his hand is very valuable. He has been waiting five years for this moment. He left home this morning at 6 a.m. to walk seven kilometers to the rural commune of Andriambilany to collect his land certificate. In front of the town hall in Andriambilany, located in the district of Ambatolampy in the Vakinankaratra region, a long line had already formed.  Many were hoping to receive their land certificates that Thursday morning. Rakotoarimanana is the first to be called and he steps up to the commune’s land tenure office window. He confirms his name in the register, enters his signature, and displays the land certificate that he has just been given for one of his five parcels of land. A victory to be savored.

“This is for one of my rice paddies that has an area of 1,330 square meters. I’m relieved to be able to say that at last that it belongs to me,” says Rakotoarimanana. He rushes home to put his certificate in a safe place. “I’ve already taken all the necessary steps to get land certificates for my other land parcels; they should be issued soon.”

In 2005, with support from several technical and financial partners, including the World Bank, Madagascar embarked upon a land reform process allowing communes to issue land certificates to secure the investments that small farmers have made in agriculture and livestock rearing.  Andriambilany is one of 500 rural communes that has a land tenure office window.

“People are clamoring for land certificates since they provide a guarantee that they can continue to work their land undisturbed without the risk of being driven off.  For the commune, issuing land certificates also constitutes a significant source of income.  With the collection of taxes on declared land parcels, the commune has been able to earn an additional revenue of nearly 5 million ariary a month,” explained Yvette Rakotomalala, mayor of the commune.

Andriambilany Commune has identified 17, 000 parcels of land without a title, and applications relating to 11,000 of these parcels are currently being processed. According to Manambina Andriamanana, an employee of the commune’s land office, they receive at least 30 applications for land certificates per month. “In fact, the more residents obtain land certificates, the more others—probably members of their family and neighbors—also come forward to submit applications to us. There has been a very noticeable change in people’s behavior. We no longer need to engage in raising awareness to get people to come to us.” 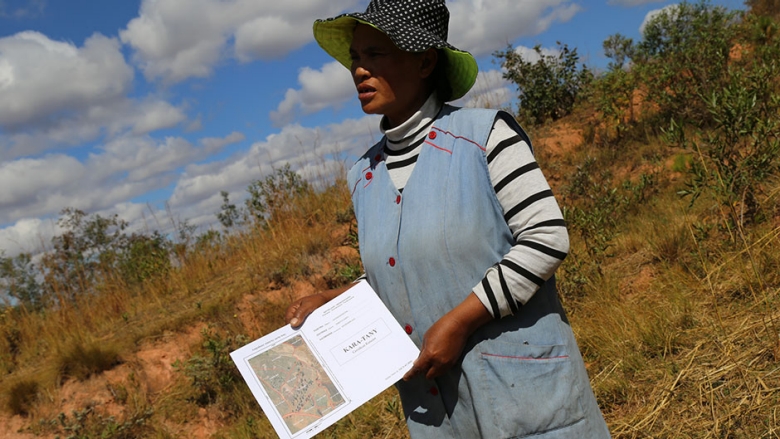 Madeleine Razafintsoa, 50 years of age, hesitated a while before deciding to go through the process of obtaining certificates for her land parcels. “I was afraid that it would take up a lot of my time and money, and would require a lot of back and forth,” she admits. “But ever since my sister got her certificate, I realized that it was important for me to do the same for my nine parcels of land, especially since three of them are far from my house and strangers have begun to steal my land and cultivate it. I need to register my name as quickly as possible. I am happy that I have been able to obtain at least one land certificate so far.”

Agriculture, which provides a livelihood for 67% of Madagascar’s population, has the potential to lift millions of people out of poverty. But unless land tenure rights are guaranteed, it remains very difficult for farmers to make long-term investments in the lands that they work. Since 2014, the World Bank has been supporting the country’s efforts to speed up the land reform process through two programs, the Emergency Food Security and Social Protection Project (PURSAPS) and the Agriculture Rural Growth and Land Management Project (CASEF). PURSAPS, launched in 2014, involves the issuance of land certificates to more than 50,000 farmers. CASEF, launched in September 2016, aims to provide secure title to 500,000 parcels in 180 communes. Within two months, 2,800 land certificates were issued in Andriambilany with the support of the CASEF project.

“The success that this commune has had can be ascribed to several factors, first and foremost the local government. In carrying out her functions, the mayor has made a point of ensuring transparency, accountability, and community participation in her decisions. There is also good synergy between the different units that deal with land issues at the local level which consist of the commune, the land tenure office, the land surveying unit,” notes Anna Wellenstein, Director of Strategy and Operations at the World Bank, and Jorge Munoz, Practice Manager of the Social, Urban, Rural and Resilience Global Practice, both of whom recently visited Andriambilany.

“Many countries could be inspired by the Malagasy model. Several African countries have already shown interest in Madagascar’s land reform process, given that it addresses difficult issues, and proposes technical and legal solutions that are viable and accessible,” remarked André Teyssier, Senior Land Administration Specialist at the World Bank.

“Decentralization has been a key factor in the success of the land reform that we have seen in Andriambilany,” explained Hanitra Rasendrasoa, Director General of Land Services. “This success is also due to the excellent technical organization of the units concerned, coupled with great transparency and the active participation of the community starting with the identification of parcels, the active communication with the local land authorities, and the provision of technical tools such as the Local Land Occupation Plan (PLOF). We would do well to take these factors into account if we aim to ensure the success of land reform on a national scale.”

The PLOF, which helps to map the location of the various parcels of land and provide information on their legal status—as well as their coordinates, boundaries, and size—is becoming the basic cartographic tool for land surveying, the registration of properties, and communal development. This tool, which guarantees the accuracy of property boundaries, is a means for preventing land disputes.