Involving communities in their own development projects

This begins as a story of the life-saving importance of roads: Like many children in Guinea-Bissau, Daisy lives some way off the main road. The nearest hospital is 10 km away. Fatinha, her mother, had to put her on a motorbike and rush her to the hospital to get help when she was bitten by a snake one night. Daisy’s story—and her life—could have ended tragically but, instead, its ending is a happy one: her venomous snake bite was treated, all thanks to a recently rehabilitated road.

Guinea-Bissau is one of the poorest, most fragile countries in the world, with a population of only 1.85 million inhabitants. Though not far from Bissau, the capital, most roads in the Pefine–Biombo region in which Daisy and her mother live are made of unpaved dirt. But having them repaired is one of the things local people have opted to do under a project known by its Portuguese acronym, PDCC, or the Rural Community-Driven Project in Guinea-Bissau, which works with communities to rebuild infrastructure, depending on their needs.

“They make a democratic decision,” says Alfa Djalo, the project manager. “Communities of up to 1,000 inhabitants each have a 65 million CFA francs budget to decide on what they see as important to rebuild. They may choose a school, a road, a spring, or even a rice field.”

As a result, women have more access to clean, freshwater springs, as well as to roads connecting them to markets, which helps them sell better products at a better price. Water-related diseases have decreased dramatically. And communities cooperate to take good care of all the new infrastructure.

The story continues with the impact roads have on petty trade: As Zanda waits for a lift to take her a 18km journey to Caracol Market to sell mangos collected from her family’s trees, she recalls the times she had to carry just half of what she has in her hands today. Now, she can make up to 8,000 CFA francs—more than double what she made before. This will allow her to pay for her children’s schooling and clothing, and buy quilts used locally during traditional ceremonies.

Djonsinho Ca also reminisces on how hard it used to be in this part of the country before the road was repaired, even if you owned a vehicle. “Only 20 ton trucks could reach where we are today,” he tells me in Pefine de Areia, a mere 25km from Bissau. “This road was full of potholes and got worse during the rainy season, when medical emergencies put our lives in jeopardy.”

"Before, we could not sell our mangos and cashew nuts,” he adds, “but today, you see vehicles buying cashews from us at good prices.” He’s pleased to have the road but their next priority is a health center: “We have space provided by the Catholic church, but there is no personnel or equipment yet.” 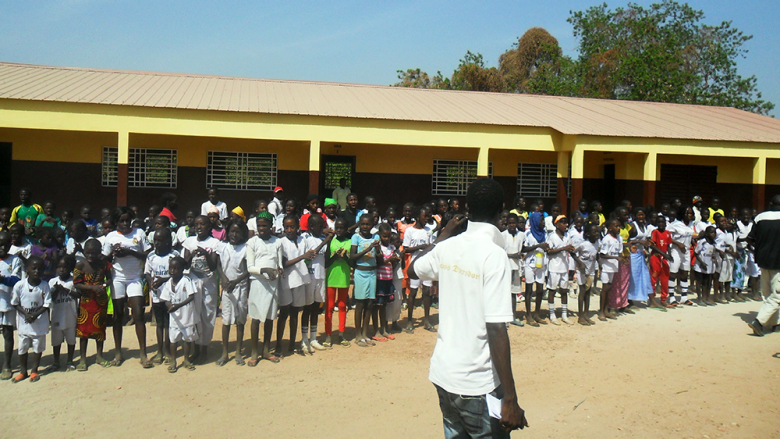 Schools are so crowded they operate in three daily shifts

To pay for school

And the story ends with the effort parents and teachers put into their children’s schools: At Bissalanca near the international airport about 13km from the center of Bissau, the community chose to build a school with its budget from the PDCC, which has received World Bank Group financing for the past seven years. Five of the school’s classrooms were rehabilitated, and a new pavilion built with three more, plus an administration office, toilets, and a cafeteria.

The Bissalanca School has 617 students (352 boys and 265 girls). “We were an elementary school,” says Augostinho Biague, the school’s principal, “but with the new classrooms, we are able to go up to high school, and now we have classes operating on three different schedules from first grade to eleventh grade.”

Students come from 12 villages within an 8km radius. The school is overcrowded, so they are taught in three different rotations, running from 7am–11am, 11am–3pm, and 3pm–8pm, each school day.

“We are mobilizing resources for three more classrooms so that our children can be split up to study in two cycles instead of three, with the younger in the morning and high school students in the afternoon,” says Emilia Sa from the Parents Association.

In this way, the Parents’ Association plans to lengthen the amount of time spent teaching each child because children with far to go to get home cannot get to school on time in the mornings, and there is no electricity to run the school after 7pm.

Girls face other obstacles to pursuing their education, too. “We have little or no time to study, as we have domestic chores,” says Esteni Ca of herself and her friends. At 21, she is in 7th grade, a grade she might have reached by the age of 12 or 13 elsewhere.

“But we come to classes every day and try to be successful,” she adds. As they make their way up the school, girls have higher rates of failure and, like Esteni, tend to be older than the boys.

The PDDC, which began funding projects chosen by communities in 2010, has managed to carry out 92% of the work it planned, most recently on a US$13.5 million budget. It has worked in all regions of Guinea-Bissau, save one—Bolama Bijagos, or 83 islands that remain beyond the project’s reach, in part because of the difficulties it has faced in finding boats large enough to ferry the heavy construction equipment it needs for repairing infrastructure, to them.